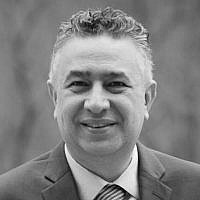 The Blogs
Shadi Martini
Apply for a Blog
Please note that the posts on The Blogs are contributed by third parties. The opinions, facts and any media content in them are presented solely by the authors, and neither The Times of Israel nor its partners assume any responsibility for them. Please contact us in case of abuse. In case of abuse,
Report this post. 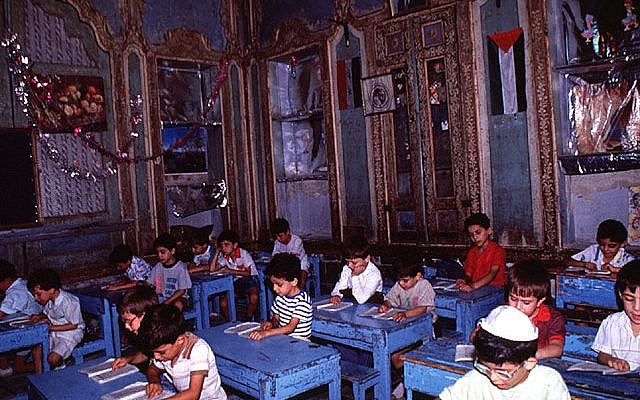 Jewish school children in the Maimonides School of Damascus in 1991. (David Lisbona)

In 1984, I was in school in Aleppo, Syria, and these seven kids appeared in my class. It was weird having so many new students two months into the school year. It also was strange that these kids would not talk to anyone. They stayed only with each other, and never mingled with the other students.

It made me wonder why. So, I asked a friend of mine, “Who are these kids?”

He came close to me and whispered: “They are Yahoud.” (Yahoud means Jewish in Arabic).

I froze. What were they doing in our school? Where did they come from?

This incident made me want to ask more questions, but I had to be careful, because asking about Jews was very dangerous in Syria, and, I’m sad to say, still is. I learned that they were actually Syrians. They were born in Syria and their roots go back hundreds, if not thousands, of years. I was stunned to learn that, but I kept this newly acquired information to myself, never to speak about it to anyone. Then, just as surprising as their arrival, after a month, these seven kids vanished, and no one even asked why.

In my 30s, I was a hospital director when Syria became engulfed in a savage brutal war. The situation was horrific, and, in the shadows, I set up a network to provide medical aid to my countrymen and woman, which led me into the field of humanitarian aid.

When my underground work was discovered, I had to flee my country, but I was compelled to continue helping my people. I was approached by people from several Israeli NGOs, who had heard about my work and wanted to help their Syrian neighbors. I couldn’t believe that Jews were offering to help people who had been their sworn enemies for decades. It made me rethink my early prejudices, and, for the first time in my life, I started working with Jews.

My curiosity made me revisit my history about those seven students, and I began talking to other Syrian friends about their memories of our Syrian Jewish community. I was surprised to learn that 850,0000 Jewish people were forced to leave Arab lands, and that Israel has set aside a day to commemorate the expulsion of Jews from Arab lands. It is November 30.

I was having a conversation about my new discoveries with my friend from Aleppo and he looked at me and said: ”Well, they left of their own free will. They didn’t even say goodbye.“

I did not interrupt him, and he continued: “My best friend was Jewish. He lived in the apartment above us and we would hang out together every day. We would play and run and laugh, and then, one day, he did not come back. I knocked on his door, but he did not answer. I wanted him to come out and play with me, but he never showed up. He abandoned me and did not even say goodbye.”

I felt that his voice was shaking. Even though all these years had passed, he still felt sadness, and at the same time, anger, when recalling this childhood memory. For Syrians, it was dangerous to ask about the fate of loved ones who disappeared. It was doubly dangerous if they were Jewish.

I told him what I had learned: that his friend had not abandoned him; that his neighbors had had to leave without telling anyone because they were smuggled out of the country, and otherwise they would have been arrested and put into jail, where they probably would have died.

What has happened in Syria in the last 10 years made me, and a lot of other Syrians, realize what impossible choices the Syrian Jewish population faced: to feel as a stranger in your own homeland; not to feel safe in your own home; and to fear that at any time someone could come and put you in jail, just because of your beliefs.

In the last 10 years, six million Syrians were forced to leave their country and become refugees. I am one of them. But if we want someday to rebuild our country and have a stable Middle East, we should recognize ALL the injustices that happened to Syrians, Including its Jewish population.

About the Author
Shadi Martini is the executive director of Multifaith Alliance, and a member of Anti-Defamation League's Task Force on Middle East Minorities. He was the general manage of a hospital in Aleppo until he left Syria for the United States, in 2012.
Related Topics
Related Posts
Comments