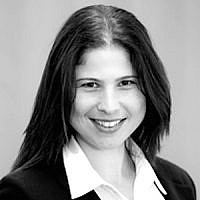 The Blogs
Sharon Florentin
Apply for a Blog
Advertisement
Please note that the posts on The Blogs are contributed by third parties. The opinions, facts and any media content in them are presented solely by the authors, and neither The Times of Israel nor its partners assume any responsibility for them. Please contact us in case of abuse. In case of abuse,
Report this post.

“Many people ask ‘why’,” he would tell me. “But only rarely is there a logical answer to that question. It is much easier for people to explain how things happen.”

Abba had an amusing theory about this that I liked to listen to. He would come into my room at night, right before I fell asleep, tucking the blanket in snugly around my body, and sit down beside me.
“Imagine,” he would begin every time, while stroking my head with his big, warm hands, “imagine that we could go back in time, way back to the olden days. Let’s say… a thousand years ago. And that we wanted to teach the people who lived then how to build, how to create and how to discover all of the things that didn’t exist then and that we have today. For example – electricity, telephones, radio, airplanes, machines, cars…”

“And television too, right, Abba?” I would ask him that every time, for the new black-and-white television that my parents had just bought was a wonder to me.

“Television, too,” my father would laugh. And he would continue – “imagine that we would be called upon to report to the king, and he would ask us to prove that we had arrived there from the future. Most people would be able to tell the king that in the future they discovered electricity and that there were cars and airplanes and fancy machines, but very few would know how to show the king how to build those things.”

At this point, my Abba and I would spontaneously fall silent, and each one of us would think about one thing that he would be able to teach other people how to build.

“And that is why, my son,” my father would conclude with a certain resolve, “you should always ask how things work and how things happen, so that if you ever go back in time, you will be able to explain to the king how all kinds of things are built.”

My Abba would smile his big, wide smile, and I would fall fast asleep, with a smile of my own.

A week after my father left to go to the army for his reserve duty, there was a knock at the door.

My mother hurried to open the door and I stood back a little bit, behind her, curious. There were three people at the door, wearing army uniforms. Their uniforms were clean and pressed and did not look anything at all like the uniform that my Abba used to wear when he came back from the army – dusty and smelling like the desert and machine oil.

My mother immediately let out a shriek and I was frightened, because they had not yet said a single word. They asked my mother if they could come in. One of them put an arm around her waist and led her to the sofa. I sat down next to her and grasped her hand tightly, when they said/asked whether she preferred that I not hear what they had to say.

But I did hear them. And when they finished telling us that my Abba had been killed in an attack that had taken place the night before in Lebanon, I interrupted loudly and asked how he had been killed, and they hesitatingly answered that his army detail had gone over an explosive device, and I continued to ask, this time in a louder voice, how the explosive device had killed him, and they shifted uncomfortably in their seats and answered that the explosive device was actually a very large bomb and that when someone would pass nearby, that would detonate an automatic mechanism that caused it to explode, and I felt how the tears were pouring down my face and how I had no control over them and I asked in an even louder voice how they knew that it was my Abba who had been killed, and they answered almost in a whisper that there had been a positive identification and I interrupted them and screamed as hard as I could – “how does the mechanism of the explosive device work, how does the mechanism of the explosive device work?” – and they did not answer me and only gazed at me sadly and then looked at my mother, who was weeping, and then she pulled me to her and wrapped me tightly in her arms.

But Abba said that only rarely is there a logical answer to that question.

Translated from the Hebrew by Rina Ne’eman

About the Author
Sharon Florentin is a lawyer, lecturer and fiction writer. Her short story collection 'More Than Meets the Eye' (Hebrew) is available at her website. Follow her on Facebook.
Comments