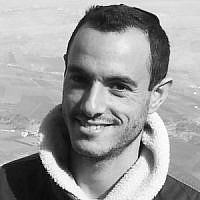 The Blogs
Matan Emmanuel Asher
Apply for a Blog
Advertisement
Please note that the posts on The Blogs are contributed by third parties. The opinions, facts and any media content in them are presented solely by the authors, and neither The Times of Israel nor its partners assume any responsibility for them. Please contact us in case of abuse. In case of abuse,
Report this post.

Watching Hamas’ rockets reach northern of Israel, many Israelis call for the expansion of Operation ‘Defensive Edge’ to a ground invasion of Gaza, arguing that such an invasion is the only way to deter Hamas. Presenting another conception are heads of the state, stating that ‘silence will be met by silence’.

In all of his years as the PM of Israel, Netanyahu has avoided entering Gaza with ground forces, preferring air strikes as a way to crush Hamas instead.  Defense Minister Ya’alon said that ”we should act responsibly and judiciously. We must not act from the gut”. Hereby reflected is the perception that the call for a ground operation is erroneous, standing contrary to the security conception made by officials.

A simple examination of this concept shows that during all of Netanyahu’s tenure, a truly and significant deterrence has not been achieved, thus raising the question: Are the Israeli citizens smarter than their leaders? Is it possible that the ordinary citizen understands more in security or maybe these are all just litigious calls of the mob?

This year we mark the 100th anniversary of the First World War, a war that began after the murder of the Austro-Hungarian heir Franz Ferdinand by a Serbian assassin, dragged the whole world into the bloody trenches and changed the political map for decades to come.  Various military concepts led the leaders of Europe in 1914, but perhaps the most famous one is the German conception. Thorough examination of this concept might lead to a somewhat different conclusion about the nature of conceptions made by state leaders.

In pre-World War I Germany, the guiding military plan was the one of Count Alfred von Schlieffen, Germany’s army chief of staff from 1891 to 1906. According to the plan, Germany prepared for a two frontal war with the French and Russians, as said Schlieffen ”Germany will have to put all of its power on the strongest, most dangerous enemy – France”.
The plan issued a period of six weeks for pounding and quick defeat over France. Six weeks, because it was the time the Germans assessed will take the Russians to be ready to open a general offensive against Germany.

The battle against France forced the use of Belgian territory. In her book ”Guns of August”, Barbara Tuchman explains that Germany did not have enough divisions to attack the French in two fronts. The Germans faced the huge French forts along the borders of Alsace-Lorraine, so it was decided to attack through Belgium.

Schlieffen and his staff stated that Belgium was not likely to fight back. Several years before the advent of Kaiser Wilhelm the 2nd to office, he had been warned by Chancellor Bismarck that ”it would be against common sense” to add more enemies for Germany, but still both the Kaiser and Schlieffen said that Belgium will settle with protest. This Evaluation came from underestimating the national resilience of the Belgians, based upon the stingy attitude of the Belgian king, Leopold II, who reigned in Belgium during the tenure of the Schlieffen.

What happened at the end? Kaiser and military leaders decided to ignore the warnings of Bismarck. When Belgium’s King Albert received the German ultimatum on August 2, he summoned the Council of State, saying ”Our answer must be no. It is our duty to protect our territorial integrity”. Eventually, the German conception went completely wrong. The Belgians decided to fight back breaking Schlieffen’s Plan into pieces, Europe entered into the horrific war of trenches and Germany lost the war.

So that is all about Germany in 1914, what about Israel? Even here, we can see how leaders were caught in a wrong perception about the capabilities of the enemy. I am talking of course about the Yom Kippur War. The best way to understand this famous misconception is to look at the actions of Lieutenant Benjamin Siman-Tov, a Southern Command intelligence officer who reported and warned about the upcoming war. When Lieutenant Siman-Tov watched the intensification of the Egyptian army on the Suez Canal, he wrote on October 1 a special report called ”The possibility of war renewal”, in which he notes that the Egyptian activity indicates that they are preparing for war.

Many warning given by simple soldiers in the field did not help to change the mind of military and political leadership. Head of Military Intelligence Eli Zeira reiterated that the Egyptian military buildup means that they are going to perform a huge practice and that the likelihood for a war is low. It is well known that the Jordanian king Hussein warned Israeli PM Golda Meir on September 25 about the upcoming war. After a discussion with Defense Minister Dayan, Golda was persuaded that war is not on sight.

We all know the end:  in the midst of Yom Kippur, Egypt and Syria started a war against Israel, catching Israel in complete surprise and leading to high number of casualties, because the heads of state failed to order a full reserve mobilization.

Hereby we have found two notable examples in military history, showing that the common perception among the heads of state is not always correct. So what about Gaza and Hamas? Firstly, it is clear that while we consider a ground invasion, we must also consider the aftermath; do we want an Israeli military control in Gaza? Do we want to remove Hamas’ Government? These are all important considerations, but if we are talking about the military technique, it seems that the concept of deterring your enemy only via air is erroneous, not t a terror organization.

In the history of wars, there has never been a war that has been won only via air strikes. A determined and ideological enemy like Hamas terrorists will not surrender until they see the white in the eyes of Israeli soldiers. Against Hamas, restraint is not a virtue, it’s a weakness. If there is one thing history has taught us, it is the fact that not all of the wisdom lies within the leaders. Citizens calling for a ground operation represent a correct intuition. If we want silence in the south for a considerable time, that is the only way.

About the Author
Matan Asher is a 24 years old student for law and political science at Bar-Ilan University and recently graduated from the Jewish Statesmanship Center. He was one of the founders of Human Rights Blue and White, sponsored by the Institute for Zionist Strategies, and is the header of Yuvalim project at BIU for the WZO. Matan is an intern at the JCPA for Dr. Manfred Gerstenfeld.
Comments