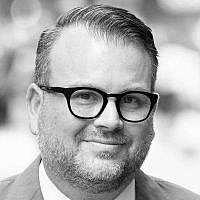 The Blogs
Evan Bernstein
Apply for a Blog
Please note that the posts on The Blogs are contributed by third parties. The opinions, facts and any media content in them are presented solely by the authors, and neither The Times of Israel nor its partners assume any responsibility for them. Please contact us in case of abuse. In case of abuse,
Report this post.

As we continue to adjust all aspects of our lives in an era of uncertainty with Covid, we, as a Jewish community continue to be faced with concerns about the sturdiness of our security. The most recent data on antisemitic incidents from the ADL, and hate crimes figures from the FBI detailing religiously-motived hate crimes — coupled with the nature and scope of incidents that have taken place during the pandemic — still paint a very vivid picture of this intractable problem.

Since the start of 2021, antisemitic vandalism, including most notably, swastika defacement, has reared its ugly head in many communities across the country — outside of synagogues, in schools, at Jewish fraternities and private homes. In December, during Hanukkah, Jewish communities were harassed, vandalized and assaulted. During the High Holidays, as The Community Security Service’s (CSS) deputy national director Richard Priem penned in Security Magazine, the “enduring threat” became apparent again with a string of antisemitic incidents that were not confined to a single geographic area, serving as a “testament to the ongoing singling out of global Jewry.”

While we suspect that Covid may have put a damper on the volume of incidents over the past year, the anti-Jewish animus we are seeing firsthand warrants a new way of thinking about security — a way of thinking that Jewish communities across Europe, South Africa, Australia and Latin America have employed for a long time.

While the security environment and safety concerns for Jewish institutions across the globe differ from what we face on the ground in the United States, as well as the context of relationships with law enforcement, in order for us to tangibly improve our security and change our safety outcomes, we need to start thinking more like our diaspora counterparts.

The Community Security Service (CSS), America’s leading Jewish volunteer security organization, was the first American-Jewish entity to bring to the United States a mindset long-held by sister communities around the world that protecting Jewish life and the Jewish way of life starts with taking ownership of our own security. To put it simply, the CSS founders saw — for years — how the worldview and culture around security carried out by European and diaspora Jewry made a significant and measured difference in the protection of its congregants and community as a whole.

And we see the success of the volunteer-led model for community security not only demonstrating its ability to thwart attacks from happening in Europe, but also creating a heightened sense of awareness centered around the notion of ordinary trained community members being put in the best position — trained at the highest levels — to recognize out of place scenarios.

It is critical to drive home the concept that best practice security goes beyond just a response to a specific incident or the ways in which we are reactive after our community is harmed. What is often misunderstood is the unique value volunteers bring to the security table — versus the public safety capabilities that private security and law enforcement provide — and how their operational prowess is essential in detecting, stopping and deterring attacks before they terrorize us.

Recently, a potential terror attack at a Jewish school in Marseille was reportedly thwarted due to locally trained security volunteers who were quickly able to recognize and respond to a stabbing attack together with law enforcement. Last year, in Halle, an attack was foiled because of trained volunteers who knew best practices for access control in order to ensure that its front doors were locked. When there is a collective understanding on the part of a community at large — coupled with the right level of training — we will then be able to fully replicate this best possible formula for protecting our institutions.

With the progression of a new Jewish communal holistic approach centered around partnerships that seek to pool resources and varying expertise, we know with a high degree of certainty that no one entity can tackle the daunting security challenges that we face alone. The CSS collaboration with The Community Security Initiative (CSI) is a New York metropolitan area-focused operational partnership already underway, synchronizing field operations, coordinating deployments of volunteers, sharing intelligence, and conducting joint training. ADL has also established a partnership with CSI, which has one of its staff members now working in ADL’s Center on Extremism and shared jointly with us at The CSS. It should also be noted that the Secure Community Network (SCN) and ADL have also forged an agreement that aims to enhance coordination and collaboration.

These efforts are smart. They are well-thought-out and bring us into a new era of improved coordination around security. The CSS stands ready to utilize its national network of trained volunteers in New York, New Jersey, Washington, D.C., Massachusetts, North Carolina, California, Colorado, Arizona and Seattle in this ongoing comprehensive approach to make our houses of worship and institutions safer.

As we start to feel a glimpse of a post-Covid reality in which our community starts returning to in-person services and events, and with the landscape of anti-Jewish animus not showing any clear signs of waning, it is incumbent upon all Jewish institutions to prioritize their security by empowering members to take responsibility for their own safety. In our newly revamped “Entry Point” program, The CSS provides an inclusive opportunity for members in any Jewish community to learn more about proactive volunteer security where attendees participate in an accessible, educational experience virtually that raises their awareness of potential threats, offering ways in which they can proactively contribute to the security of their community.

Trained volunteers serve as our best eyes and ears on the ground, ensuring that their loved ones, neighbors and fellow community members inside can engage comfortably in an environment knowing that they will be protected.

The volunteer model and the creation of a consistent culture of vigilance is what has saved countless Jewish lives in cities small and large overseas. When we begin gathering again, let’s take that European, South African, Australian and Latin American Jewish communal security mentality with us.

About the Author
Evan Bernstein is the new CEO of Community Security Service (CSS). He served as Vice President, Northeast Division at Anti-Defamation League (ADL) and has over 20 years of nonprofit experience. He also served as the State Director for AIPAC in Arizona, and Executive Director at the consulting firm Community Counselling Service, Inc. (CCS Inc). He began his career at the United Way of New York City, after earning a B.A. from Western Connecticut State University and a A.L.M. from the Extension School Professional Degree Program at Harvard University. He currently sits on the Harvard Alumni Association Board of Directors.
Related Topics
Related Posts
Comments