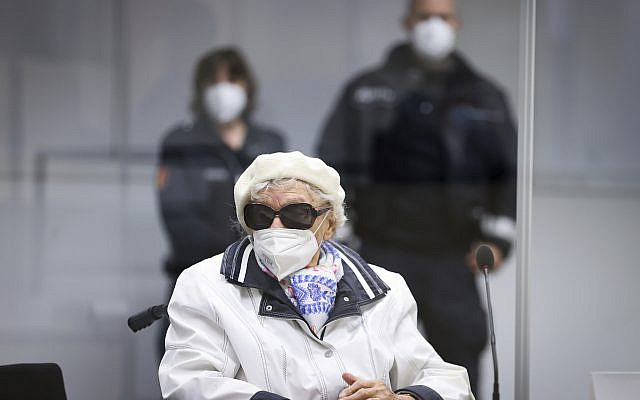 Defendant Irmgard Furchner, 96 at the time, sits in the courtroom at the beginning of her trial in Itzehoe, Germany, November 9, 2021. (Christian Charisius/Pool via AP)

On Tuesday, the regional court in Itzehoe, Germany, a small town north of Hamburg, is scheduled to deliver a verdict in the case of 97-year-old Irmgard Furchner, who was charged with accessory to murder for her role from April 1943 until May 1945, as the secretary of Paul-Werner Hoffe, the commandant of the Stutthof concentration camp. Stutthof, which was built in the proximity of Gdansk, was the first concentration camp built outside of the original territory of the Third Reich and was built primarily for Poles: Polish resistance fighters, intelligentsia, Catholic clergy, Communists, and other “enemies of the Reich. In the spring of 1943, large numbers of Jews, overwhelmingly women, were deported to Stutthof, and the Nazis built a gas chamber in the camp, where many of the approximately 28,000 Jews murdered in the camp (out of an estimated total of 65,000 victims) were annihilated.

Furchner’s case was somewhat exceptional in several respects. Unlike the other trials conducted relatively soon after a dramatic change in German prosecution policy vis-à-vis Nazi Holocaust perpetrators in the wake of the conviction of Ivan Demjanjuk of accessory to murder in the Sobibor death camp, the local prosecutor in Itzehoe took about five years to decide whether to prosecute her. The delay easily could have prevented the trial from taking place at all.

Then there was Furchner’s refusal to appear in court to face the charges against her, lest she be “made a mockery before all of humanity,” and, on the day the trial was scheduled to begin, her flight to Hamburg where she was swiftly apprehended by the police, and jailed for several days.

Yet perhaps the most striking aspect of the case occurred several days ago, when Furchner, who had maintained total silence throughout the entire first 14 months of the trial, her face hidden behind sunglasses, a mask and a portfolio, addressed the court and said she was “sorry for everything.” She then claimed she was unaware of the genocide being committed in Stutthof, a claim that apparently was the basis for her attorney’s request that she be acquitted of all charges.

Furchner’s case will be the sixth of the “belated trials,” (those made possible by the dramatic change in German prosecution policy vis-à-vis Nazi perpetrators) to be completed. So far all the defendants have been convicted, but their reactions were very different. Some of them – Ivan Demjanjuk and Josef Schuetze, for example – tried to claim total innocence. Bruno Dey, who was a watchtower guard in Stuttof, did not deny his S.S. service but did not apologize or express any empathy for the victims. Oscar Groening, the accountant of Auschwitz, admitted “moral guilt,” but not criminal guilt, whereas Reinhold Hanning who was accused of accessory to murder in 170,000 cases for his service in Auschwitz, acknowledged the crimes and apologized for doing nothing to prevent the Holocaust, but denied the charges against him.

Irmgard Furchner’s response differs from those of the previous defendants. She expressed regret “for everything,” while implausibly claiming total ignorance of the crimes committed in her place of work for more than two years. Furchner’s carefully couched expression of regret minus an admission of guilt is noteworthy mainly for its timing shortly before sentencing. That’s an opportune time to try and gain the sympathy of the judges, and it’s only natural. Yet Furchner’s refusal to accept any criminal responsibility throughout all the previous proceedings and her feigned ignorance regarding the mass murders tell a different story: no shame, no acceptance of guilt.

In the Bruno Dey case, the presiding judge Anne Meyer-Goering explained very clearly why defendants like Dey were being prosecuted even so many decades after they had served in concentration camps, even at a very elderly age, and even though higher-ranking individuals from the same camp had not been brought to justice.

The bottom line, she clearly explained, is that when crimes of the magnitude of the Holocaust are committed, there is no such thing as a small cog. It can only be fervently hoped that the judges in Irmgard Furchner’s case will agree.

About the Author
Dr. Efraim Zuroff is the chief Nazi hunter of the Simon Wiesenthal Center and the director of the Center's Israel Office and Eastern European Affairs.
Related Topics
Related Posts
Efraim Zuroff