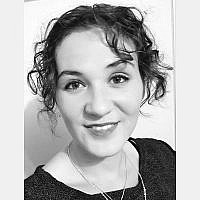 The Blogs
Chaya Tal
Blogger, social activist, border crosser
Apply for a Blog
Advertisement
Please note that the posts on The Blogs are contributed by third parties. The opinions, facts and any media content in them are presented solely by the authors, and neither The Times of Israel nor its partners assume any responsibility for them. Please contact us in case of abuse. In case of abuse,
Report this post.

Sitting quietly on the roof of a high building, my eyes wander across the the varicoloured houses of Jerusalem, outspread around my building and till the faraway hills at the horizon. I sit in a plastic chair, and it is really quiet around me, no noises on the street, except for a faraway ambulance siren. Although I’m prepared to pray, somehow it’s this siren that drives me back to the reality of the day I’m in. It’s the beginning of a period which once lead to a serious and fate-changing catastrophy for the Jewish people. This day, 17th of Tammuz, is the official start of a whole period of mourning. In my plastic chair on the roof, the hunger and lassitude I feel due to the lack of drink and food, make me experience a comprehensible soldiarity with the idea of mourning. Actually it’s only in Israel’s hot climate that I realised how the lack of satisfying my two basic needs can contribute to a common realisation of sadness.

Not every even observant Jew observes the fast of Tammuz 17. There is something of a historical distance in that approach, and something in the way we have been taught about this day. While Tisha be Av and Yom Kippur have both a similiarly grave status and most of us are supposed to know the warnings against not fasting on this day, Tammuz is somehow symbolical, but not that much. I see this for the reason that the start of a difficult period of time is not the same as its culmination. According to halacha, the mourning restrictions on the 3 weeks following Tammuz 17 increase with each week. Means, the first week is quite “relaxed”, and that’s how the public perceives it. That’s how I perceive it, too, but although I’m not a particular makpida on all the Jewish halakhic rulings, I prefer not to omit this day, and I have my reasons…

The heat weights down on my head. I walk past the Jerusalemite streets, towards the Old City’s walls. The city is localised at the same place where the old catastrophy occured, but the historical landscape doesn’t remind me much of it. Even being in Israel does not always change the feeling that I had in the Diaspora – that my Jewish mourning and historic rememberance are happening in my head and there isn’t much relation to what I see with my eyes.
Due to such feeling which I’m sure I’m not alone with, I prefer, year after year, to take the advice of my Rabbis in my former Midrasha and to concentrate on the metaphysical meaning of this day. Yes, my fast is quite physical, and I say words in my prayer which speak about restoring sacrifice offerings and priests. Yet I learned that the deep meaning is a bit different.

So what is the meaning of Tammuz 17? It’s the commemoration of the complexity of Jewish reality.

With the destruction of the Temple many years ago, an old world vanished. After its breakdown, there have been numerous events of destruction in the Jewish history, always like a small repetition of the Big Loss. Exile followed exile, neverending wanderings from country to country, contineous uprooting of communities, disappearance of whole towns being killed in pogroms. Meanwhile, the world kept on changing, and we changed our reality with it, holding to the only somehow firm factor in our lives – the Torah.
The reality we live in today – is less than 100 years away from two dramatic experiences, the two World Wars. They managed to “disburden” our planet of millions of its citizens and speed up the modernisation. The Jewish European world was burned to the ground by the Holocaust, and the Asian Jewish communities were uprooted a couple of years later, by the mass aliyah to newly-found Israel.

Jews as they were known in their majority, both in Europe and Asia, are no more. There is no doubt in that. Israel has stepped in to fill the void on the one side. The Jews in Israel are busy inventing themselves, their Judaism, their global profile. On the other side of the sea, there is America, and its Jews, who somehow intend to maintain a double identity, which leads again to self-search, self-invention, and all to often, to self-abandonment. European communities are mostly left to rebuild and to define themselves anew, amidst a changing Europe and revived antisemitic sentiments. Asian Jews in Asian countries – its a sole survival struggle. Their Judaism is left without future, as they face no revival, only decrease.

As I think of our people going through so many different revolutions at the same time (and this has been just a brief summary), it seems to me as a huge, scary Balagan. Why are we now so distanced from unity than ever? How have we come so far to turn away from the Torah that paved our origins and defined our identity over centuries? Where have we failed, where do we still fail and how can we optimize our life to be both honest and Jewish at the same time? Where are the origins of our misunderstandings, of our flight from ourselves, of our apathy towards our common future?

The lack of food and drink on this day brings me back to earth. My imagination is a bit dried out, I cannot talk or laugh loudly, and I have too much headache to watch a movie. I believe in fasts, and in time periods, when we are basically told – to sit down and think.
This day is ours. It is supposed to be dedicated to our people. I invite you, and me, to sit down, to open the mind to questions, and think about us. And closer to evening time, we might feel some hope that our nation will do better if we only spend a deeper thought on it.

About the Author
After moving to Germany from Russia, Chaya spent most of her teenage years with Jewish community involvement as counselor and coordinator for young Jewish adults in Germany. Chaya discovered tradition and languages on her own which has shaped her identity since early age. She made aliyah in 2011 and has since then worked as a translator, freelance journalist, media analyst and tour guide, while blogging in German for 4 years about Jewish life in Judea and Samaria. She is part of the "Roots" movement for understanding, nonviolence and transformation between Israelis and Palestinians.
Comments