Responsible for schlepping the holy vessels through the Biblical desert, the ancient Levites were some of the original Jewish strongmen, yet for most of Jewish history feats of strength were not necessarily the forte of the “People of the Book”. 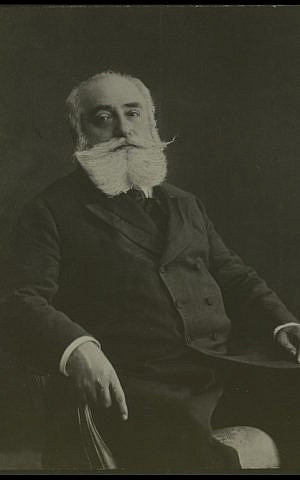 In the late 19th century, as many sought to redefine what it meant to be a Jew in the modern world, efforts were made to discard the traditionally “meek” Jew who spent his time solely on intellectual pursuits.

One of the men at the vanguard of “Muscular Judaism” was himself a Levy, Edward Lawrence Levy to be more precise: Hebrew school master, the world’s first international weightlifting champion and a veritable “strongman” in a dizzying range of pursuits from opera to gymnastics to Jewish education, journalism and even the brewing industry…

Levy’s boyhood remains shrouded in mystery. Remarking that his “school days were not of the kind that make history, autobiographical or otherwise”, Levy intentionally begins his memoirs as he is “launched on the world” at the beginning of his professional life.

From a few details in his rare autobiography and comprehensive research published by David M. Fahey in E. Lawrence Levy and Muscular Judaism, 1851-1932, we know that Levy was born in London and that his father died when he was six.

Destined by his head master – a surrogate father of sorts – to become either a rabbi or an educator, it became clear to young Edward that he was more suited to the latter. Already at 16 he became first master at a boarding school responsible for teaching Hebrew and Religion, Classics, French and other subjects.

There were boys in the Academy as old as I was, but, thanks to my being prematurely and precociously whiskered, bearded and moustached, nobody, except the Headmaster, knew it.

Just a few years prior, his own Hebrew and Talmud teacher had told him:

Edward, you were born old; you never were a boy.

And so it was that the whiskered man-child “launched on the world”.

He moved to Birmingham a couple of years later and for six decades would more than dabble in countless spheres of public life. 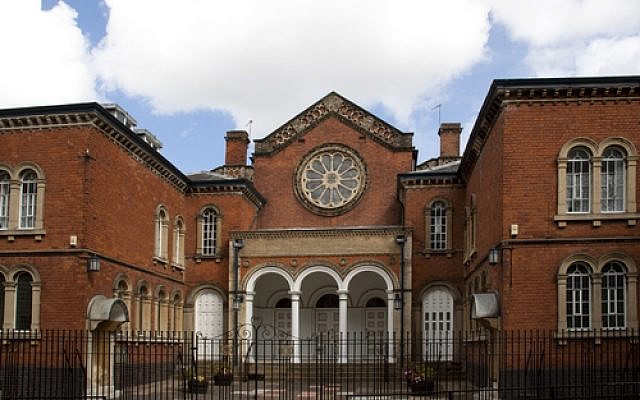 Shortly after arriving, he joined the staff of the Birmingham Hebrew School. While there, he would, among other things, found the city’s first Jewish Amateur Dramatic Club in 1872, followed by the Alliance Literary and Debating Society, “somewhat avant-garde in admitting ladies,” as well as having both Jewish and non-Jewish members. 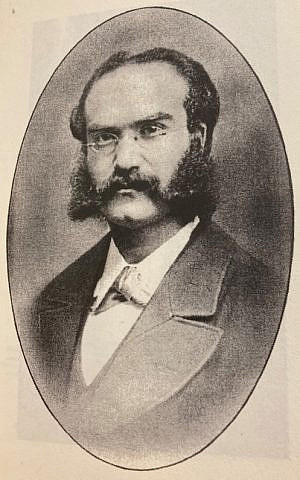 Levy at age 24, around the time he opened his own school. From E. Lawrence Levy and Muscular Judaism, 1851-1932, part of the National Library of Israel collection

While remaining active in the Jewish community, in 1875 he went on to establish and run the “Birmingham Jewish Collegiate School”. When non-Jewish students enrolled, he renamed it the less parochial “Denbigh Lodge Collegiate School,” proud not only of the academic level, but also of its “glorious mixture of the best Jewish lads with similar Christian school fellows…”

Besides running a school, teaching, attending and critiquing theater performances, writing, and founding and serving as an active member in numerous other organizations, Levy’s interest in gymnastics and physical fitness grew as the “strongman boom” peaked and he approached his fortieth birthday in 1891. 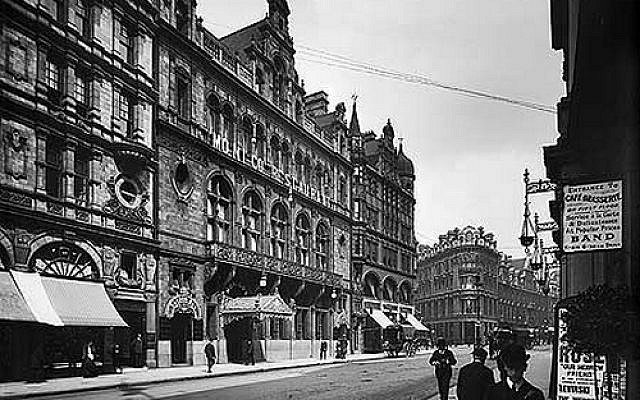 Levy’s was an “unheroic mould” in his own words. A contemporary newspaper account described the champion as “… a very short man… presenting a bald head with a heavily-bearded gold spectacled face.”

The victory, however, did not come without a price. As the competition was on Shabbat, his participation cost him his post as synagogue choir master. Levy pontificated:

When the recording angel puts a black mark against my name for having ridden on the Sabbath, I hope he will put down as well the distinction I brought to muscular Judaism. 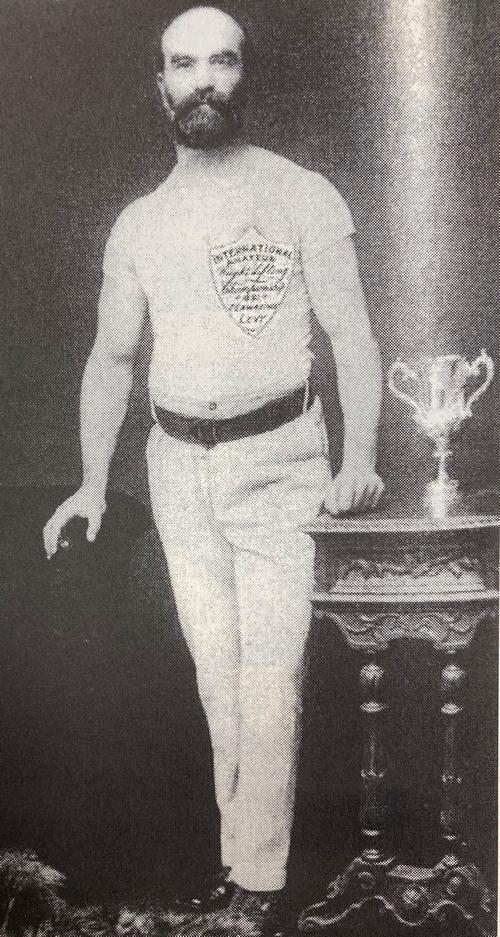 Levy with his 1891 British Amateur Championship trophy. From E. Lawrence Levy and Muscular Judaism, 1851-1932, part of the National Library of Israel collection

Just two months later, he won the first World Weightlifting Competition, beating out strongmen from Germany, Austria, Italy and elsewhere and officially becoming the first ever international weightlifting champion. He later recalled, “There is one great feature of the two championships I won which I cannot refrain from referring to, and that is the great joy I felt as a Jew at winning these events.”

Though some inaccurate reports would later give Levy a gold medal in shotput at the first modern Olympics in Athens in 1896, in reality he represented Great Britain there as a judge and a journalist, not as a participant.

I regard the trip to Athens and participation in the Olympic Games of 1896, as one of the biggest events of my life. It was glorious from every point of view.

Levy would lecture on those first modern Games for years to come (among many other topics from nihilism to Talmudic thought and Jewish humor).

When the King of Greece visited London in 1905, Levy was invited to greet him. Three years later he was an organizer of the gymnastics portion of the 1908 Olympics held in the city.

Already approaching 60 by then, Levy generally didn’t see a need nor have a desire to slow down.

He remained a member of the Birmingham Athletic Club for a total of 50 years, serving as chairman for 30 of them. 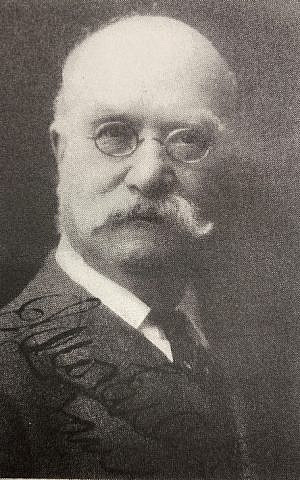 Levy at age 72. From E. Lawrence Levy and Muscular Judaism, 1851-1932, part of the National Library of Israel collection

He was a long-time drama critic and sports writer. He also worked in various capacities in the local brewing trade, for decades somehow singlehandedly writing and publishing the industry’s Licensed Trade News, a weekly newspaper.

With his physical strength naturally diminished with age, Levy dedicated his later years largely to scholarship, lecturing and working on about eight books after his 60th birthday. Largely based on his first-hand experiences in the Jewish community, numerous political and social clubs and the local theater scene, these books provide a fascinating glimpse into late-Victorian and early 20th century England.

Looking back on his life and accomplishments shortly before he passed away, Levy the strongman mused:

I have no money, never had and never shall have any. But, happily, what I have seen, what I have achieved, much of my happiness in life, has been obtained, thanks to – ‘Dumbbells, twopence a pound.’ Our worldly happiness, the success we attain is fortunately not dependent upon pounds, shillings and pence.

If you liked it, check out these:

Meet the Jewish Circus Performer Who Could Bend Iron with His Bare Hands
Passing the Torch: The Maccabees of Berlin
Who Is the Israeli Who Won 10 Olympic Medals?

About the Author
Zack is a writer and editor who manages global content and media relations at the National Library of Israel, where he co-edits The Librarians, an online publication dedicated to Jewish, Israeli and Middle Eastern history, heritage and culture. He tries to learn something from everyone and lives in Jerusalem with his endearing and thought-provoking family, for which he is grateful.
Comments