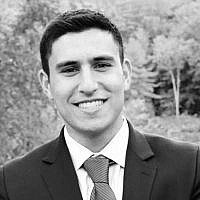 The Blogs
Daniel Mael
Apply for a Blog
Please note that the posts on The Blogs are contributed by third parties. The opinions, facts and any media content in them are presented solely by the authors, and neither The Times of Israel nor its partners assume any responsibility for them. Please contact us in case of abuse. In case of abuse,
Report this post.

The story of Max Steinberg is one of unimaginable heartbreak and sorrow. A young boy who grew up thousands of miles away from the Jewish homeland and who paid the ultimate price. A young man with no direct relatives in the region who was mourned by 30,000 of his Israeli kin.

In the face of tragedy we all seek to internalize what has happened. We find similar features, identifying characteristics that mirror that of our own.

The story of Max is close to home for me; almost too much so.

I entered Washington University in St. Louis with the express purpose of running away from all things “Jewish” and all things “Israel.” There I played baseball and attempted to leave my Modern Orthodox upbringing behind me.

Thank G-d, the biggest baseball fan on campus was the Chabad rabbi and in a journey that only G-d could authorize I found myself reengaged in the Jewish world I so desperately attempted to avoid.

The pivotal moment for me was my trip to Israel with Birthright- with my mother’s insistence. I created every excuse I could to stay clear of the trip.

But eventually I was coerced and there I had my “stereotypical” moment at the Western Wall and developed close friendships with a few Israeli soldiers. We hiked mountains and shed tears. We met Jews and Arabs and pretended to be native Israelis.

Collectively, as a trip, we attempted to cram a lifetime of “being an Israeli” into 10 day period. And unfortunately, being an Israeli requires a familiarity with war and unfathomable levels of courage .

As I walked out of the infamous Holocaust museum, Yad Vashem, with one of the eight soldiers on my trip, amidst tears, I posed to him a question that lies at the heart of the modern Jewish question: “If your unit went to war, would you really run out there in front of them?”

“Are you joking?” he replied. “That’s not even a question, man. Of course I would lead my friends. And we will fight — the Jews have no other choice.”

Some will claim that such a conclusion is the result of an irrational and imaginary vision of perpetual and virulent anti-Semitism. However, if the riots across Europe and America and the editorial pages of too many papers are any indication, this is nothing more than the cold, harsh reality.

It is only natural that a Birthright goer, or any foreigner who becomes familiar with the reality that their Israeli counterparts call “normal,” would be moved to action. The experience naturally makes clear that the Jewish people are living in a largely fortunate time; a dream period for the Jewish people. Not only have we seen the rebirth of the Jewish homeland, but a rebirth full of hope and life within the land.

And we also discovered that Israel stands for what is good in humanity, what is just.  To the point that the country endangers the lives of its men and women, like Max, in order to protect the lives of innocents brutally held captive by the enemy.

Birthright didn’t convince Max to die for a foreign country out of an irrational and immoral standing. It showed Max, as it has shown many others with less courage than he (like myself), that the Jews are a people that must exhibit constant vigilance, will have to fight at times to protect their very existence. It isn’t going to be pretty, it isn’t going to be nice. People will die and people will cry.

As we look around this world of ever creeping darkness towards the Jewish people, there is only one body we can continually trust- ourselves. It is clear that Max understood just that. That someone has to do it. He paid the ultimate sacrifice so that his people would be free.

This is how the Jews will have to fight.

About the Author
Daniel Mael is a senior at Brandeis University, a contributor to TruthRevolt.org, and a fellow at the Salomon Center.
Comments