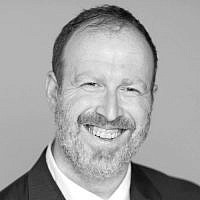 The Blogs
Ariel Goldberg
Seeking the divine in a mixed-up world
Apply for a Blog
Advertisement
Please note that the posts on The Blogs are contributed by third parties. The opinions, facts and any media content in them are presented solely by the authors, and neither The Times of Israel nor its partners assume any responsibility for them. Please contact us in case of abuse. In case of abuse,
Report this post. 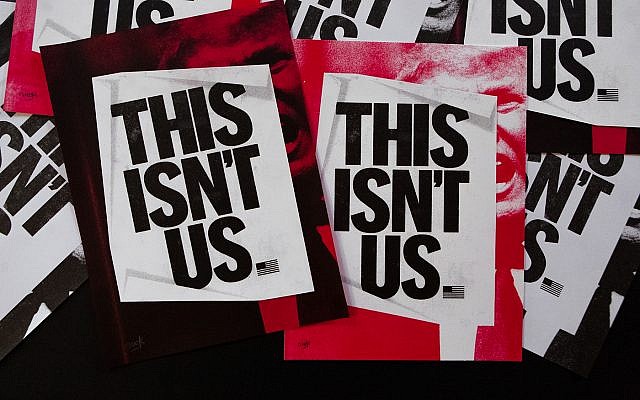 When horrendous acts of racist terror have happened over the past five years, national leaders have been quick to proclaim, ‘this is not us!’ (Witness the Prime Minister of New Zealand following the Christchurch massacre) I empathize with their motivation – they want to condemn racist violence in unmistakable terms. I also disagree. We are all interconnected. As such, whoever believes in inclusivity is interconnected with those who support white supremacy.

Splitting (or black-and-white thinking) is a psychological defense mechanism where a person creates a false separation from a part of themselves they dislike. They look, for example, at their bad temper and decide ‘this is not me. I am a nice person’. In reality, our characters are rarely about either-ors. We tend to be both-ands. A person can be nice AND have a bad temper, at the same time. Emotional maturity comes, in large part, through a person embracing her both-and-ness and taking responsibility for the traits she needs to repair.

The costs of splitting can be high. Through being split off, a character issue becomes more dangerous. It gets exiled to a person’s subconscious, allowing her to cause harm to herself or others, unaware.

Societies can also engage in splitting. That is what I believe happens when a society says, “this is not us”. We can distance ourselves from those who make us uneasy and this can lead to a society distancing itself from responsibility for its problem. That is exactly what racist groups aim for. They thrive in a world of splitting, where “us versus them” prevails.

I have people in my extended family and social milieu who are sympathetic to racist ideas. You probably do also.  Recently, I chatted with Ben (not his real name) a thoroughly decent, highly educated acquaintance who expressed his support for an academically respectable version of the replacement theory (a touchstone of the far right) which holds that liberal elites are encouraging non-white immigration to shore up their own power-base and undermine the foundations of American society. Had I told myself “this is not me, Ben is a crazy right winger” it would have freed me, subconsciously, from feeling a need to confront Ben’s ideas. I could also have used it as an excuse to cut Ben out of my life because I felt uneasy around him.  But what good would that do? It would only further isolate Ben (and me) from people who think differently – and so add to the problem of disconnection.

Ben is not a member of the Aryan brotherhood. He is a thoughtful person and a responsible citizen. And by accepting the replacement theory uncritically, Ben is doing his little bit toward creating a climate where non-White Americans can experience prejudice, exclusion and even violence.

I respectfully but forthrightly told Ben how dangerous I feel the replacement theory is and how, knowing him to be a person who strives to do the right thing, I would have expected more of him. Ben took in my feedback and said he would reflect on it.

I do not know if I changed Ben’s mind. It’s unlikely that one conversation could do that much. But you never know. Perhaps it planted a seed that will grow, later. At the very least, a witness was made to white supremacy being unacceptable. I did my little bit to create the climate of inclusion I want to see in the world. This, I believe, is what we all have to do, day by day, conversation by conversation.

The Torah legislates that when a person is found dead in a field, the elders of the town must declare “our hands have not spilled blood” (Deut 21 1:9). The elders must verify that they did not send the victim off without provisions or an escort. If they failed to do so, Rashi explains, the victim may have had to steal provisions, resulting in him being beaten and killed by highwaymen. Everyone, in other words, must ask: have we behaved out of a sense of mutual responsibility?

We are all interconnected and must act on it. When there is violence no one can say they are not, in some way, responsible – even if they are not to blame for it.

Taking responsibility begins with being responsible for our speech. Knesset speaker Yuli Edelstein observed, “Physical and verbal violence become legitimate, when there is no clear condemnation” (of hate speech).  Edelstein’s words resonated with me.  When I lived in Israel, between 2009 and 2012, I experienced hate speech on many occasions and witnessed how rare it was for the people in my religious Zionist community to condemn it.  Otherwise menschlich people I knew would sometimes causally express their hatred for Palestinians. “Palestinians do not value their own lives so why should we value them?’ I heard a beloved rabbi of mine say numerous times.  ‘Why have we not had the courage to eradicate this cancer?” a dear friend of mine once wondered. I could cite many other examples.

It’s not hard to imagine why this hate speech often went unchallenged.  None of the people I knew who made hateful statements showed the slightest intention to personally harm Palestinians.  All of their hearers had lost a friend or loved one in horrendous acts of terror perpetrated against Israeli civilians.  It made sense for them to split-off and say “We are the victims. Hate speech is not about us.”  It is about us.  When hateful words are circulated they can do their bit to support an atmosphere where over-zealous people can feel emboldened to commit acts of violence (like the 16 year old yeshiva student who murdered Aisha Rabi).

During the period of national soul-searching following the Rabin assassination, Rabbi Yehuda Amital, a revered spiritual leader of religious Zionism put the issue plainly: “I heard the assassin (Yigal Amir) speak in court and there was nothing new in his words, Every word the uttered had been said more than once in the past year”. Rav Amital went on to quote the Torah verse about collective responsibility for a traveler visiting a city. He wondered: “Are those who spoke hatefully of Rabin, any less culpable than the elders who failed to provide a traveler with provisions? Is the connection more far-fetched? Can they truly say “Our hands have not spilled this blood?”

Hashem created the world with speech. We can contribute to destroying the world with our speech, or become complicit when we avoid confronting hate speech.  By splitting off, we can also coarsen ourselves, with negative consequences for our self-awareness and personal relationships.  And when we speak constructively, we can do a little to renew the world and ourselves.

It begins with each one of us – today.

About the Author
I loves exploring the world, inwardly and outwardly. A native of Ottawa Canada, I remade my life in Israel and earned smecha (rabbinic ordination) while studying at Yeshivat HaMivtar (Efrat) in 2012. In New York city, I served as a hospital chaplain, spiritual educator and clinical counselor, earning an MSW from Hunter College (New York) in 2019. I currently make my home in Washington DC. My evolving outlook is shaped by my religious experiences, my explorations of torah, my life with a disability and my encounters with the people I meet in hashem's world.
Related Topics
Related Posts
Comments