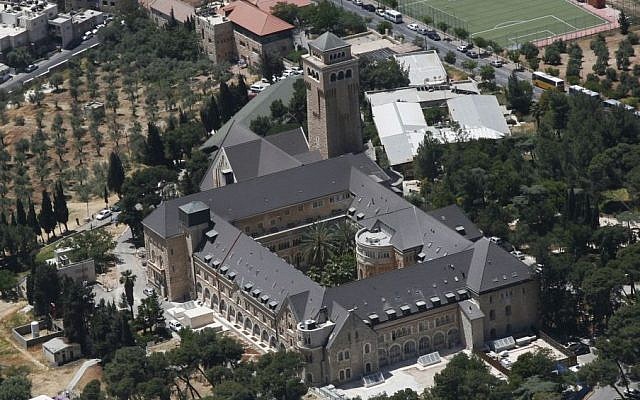 The Palestinian Authority owes a hospital in Israel $41 million. The hospital in question is Augusta Victoria Hospital. Augusta Victoria, located on the Mount of Olives in Jerusalem, is operated by the Lutheran World Federation, an umbrella organization of Lutheran churches located across the globe. 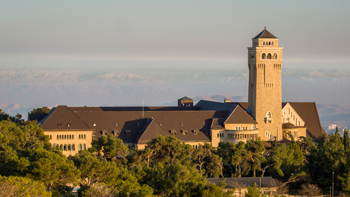 The Augusta Victoria Hospital is in dire straits because the Palestinian Authority will not pay its bills. (Credit: Uri Aloni via Wikimedia Commons.)

The hospital is hugely important to the welfare of Palestinian children in the West Bank and the Gaza Strip. These children are able to obtain all sorts of medical care such as cancer treatment and kidney dialysis from the hospital. The Palestinian Authority is supposed to pay for the treatment.

The PA, however, does not pay its bills and as a result, Augusta Victoria is in dire straits financially. Relaying information obtained from a press release published in Arabic, blogger Elder of Ziyon reports, “The Palestinian Authority owes the hospital NIS 150 million ($41 million) and the debt has been accumulating at the rate of $4 million every month.”

The PA has been in arrears for a while. In 2014, the PA owed the hospital more than $15 million, prompting the Evangelical Lutheran Church in America (ELCA) to ask the U.S. Congress to instruct the United States Agency for International Development to cover the Palestinian Authority’s unpaid bills. Since 2014, ELCA has issued a number of advocacy alerts to its members in the United States asking them to call their representatives in Congress to instruct USAID to pay off the PA’s debts.

ELCA’s lobbying has been effective. In 2016, USAID gave the hospital $11 million to cover approximately 30 percent of the PA’s outstanding debts to the hospital. This left the hospital more than $25 million in the hole. In August, 2016, ELCA issued an update on the hospital’s cash flow crisis. In the update, ELCA thanked its members “who have been engaged in advocacy for Augusta Victoria Hospital this year and last year!” The update continues:

We are grateful that the Palestinian Authority (PA receivables) have been reduced and are hopeful that a system will soon be put in place for more regular payments to avoid these crisis situations.

Amazingly enough, the American Jewish Committee helped ELCA lobby Congress. Writing for the Jewish News Service, Rafael Medoff reported in late March that “for the past several years, senior officials of the American Jewish Committee (AJC) have undertaken the task of pressing U.S. officials, including members of Congress, to pay millions in unpaid bills the PA has racked up at the Lutheran-sponsored Augusta Victoria hospital in eastern Jerusalem.”

Rabbi David Rosen, who represents the AJC in Jerusalem, told Medoff that in addition to lobbying Congress, he spoke with American diplomats in support of the effort to get American taxpayers to pay the Palestinian Authority’s unpaid debt to the hospital. After the story came to light, the AJC stopped its lobbying efforts.

On one hand, giving money to a hospital seems like the right thing to do. Augusta Victoria needs the money and the Palestinian children need the medical care provided by the hospital.

The problem, however, is that by covering the PA’s unpaid debts, the United States government is subsidizing terrorism against Israelis. This is undeniable. It is a fact — an indisputable fact.

The PA does not pay its bills to Augusta Victoria Hospital, but it does pay millions of dollars to hundreds of terrorists and their families, who have murdered Israelis, most of them Jews.

In 2016, the PA paid more than $300 million (about seven percent of the PA’s total budget) to terrorists and their families. This is a political decision made by the Palestinian Authority led by Palestinian President Mahmoud Abbas. If it can spend more than $300 million in support of terrorists and their families, the PA should be able to find a way to pay its hospital bills.

What is most troubling about ELCA alerts is that they are entirely geared toward asking Congress for funds to cover the PA’s debt. They do not offer any value judgments about the PA’s decisions, nor do the alerts encourage Lutherans to voice their concerns to the PA itself — despite the fact that it is the PA that is solely responsible for the crisis faced by Augusta Victoria Hospital.

Apparently, the folks at ELCA have not even thought that the PA should and could be held accountable for its actions on a rhetorical or practical level. It could be done on a practical level without putting Augusta Victoria’s patients at risk. According to this report, the U.S. gives the PA on average $400 million a year. Congress could simply pay the debt to Augusta Victoria and deduct the payment from other grants given to the PA.

Did ELCA officials suggest this type of arrangement? Did such an arrangement even cross their mind? There’s nothing in the alerts that suggest it did.

The formula behind this decision is a simple one: Hate for Jews, indifference for Palestinians. When faced with a decision between helping Palestinians and terrorizing Israeli Jews, the PA has chosen the latter.

Maybe the Palestinian people value the lives of their children more than their leaders do, but if they do, they haven’t protested in the streets of Bethlehem and Ramallah to make their voices heard on this issue. So far, they have not had to because American taxpayers have been subsidizing diabolical decisions made by PA leaders in Ramallah. And they have done this at the behest of the largest Lutheran denomination in the United States. Every Lutheran in the United States, whether they belong to ELCA or not, should be outraged by this turn of events.

Every Christian should be outraged.

Is this what peacemaking looks like? Apparently, for the Evangelical Lutheran Church in America and the Lutheran World Alliance, the answer is yes.

Dexter Van Zile is Christian Media Analyst for the Committee for Accuracy in Middle East Reporting in America (CAMERA.org). His opinions are his own.