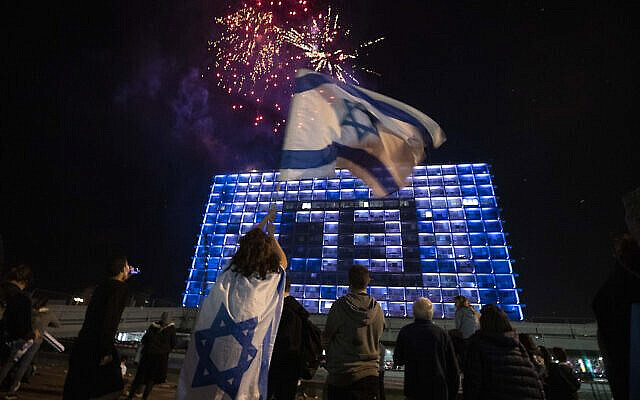 When Israelis are bombarded by Hamas rockets and violence erupts against Jews in the US, Canada, and Europe, the only war most of us can fight is the ongoing war of words. And yet, what can we say?

It often feels impossible to talk to colleagues, fellow students, neighbors, and even friends and relatives whose trusted news sites distort and malign Israel, or who are influenced by the commonplace yet thoroughly bizarre alignment of progressive, campus social justice with the repressive, totalitarian Islamic Resistance Movement (Hamas). Even when we have the facts, it doesn’t seem to matter.

The recent Hamas war on Israelis revealed how high the stakes are for Jews outside Israel. The 500% percent uptick in antisemitic acts in Britain, the 251 hate crimes against Jews in the US in less than three weeks, the verbal and physical attacks on Jews in Canada, and the underlying assumption of so many news stories that Israeli self-defense is indefensible, if nothing else, have given the lie to “anti-Zionism is not antisemitism.” When thugs burst into restaurants to assault Jews; or chase Jews through the streets to beat them up; when synagogues and Jewish businesses are vandalized with anti-Israel graffiti; or Jews are harassed by keffiyeh-clad marchers shouting threats and obscenities from loudspeakers in Jewish neighborhoods; when police protection at Jewish schools and community centers is routinely needed, we’re far outside the realm of political discourse. Indeed, this has been true for a long time.

Jews, who have been at the forefront of every social justice movement in America, who are overwhelmingly open-minded, well-educated, and humanitarian, lose social standing if they stand up for fellow Jews, for their relatives in Israel, or for themselves. University students attest to this situation most dramatically. See here and here and the Amcha Initiative that has been tracking antisemitic activity on college campuses since 2015.

So, while a course in krav maga and good security at Jewish sites are needed, we also need a strategy for a verbal response. There may be some settings in which dialogue is possible but more urgently we need ways simply not to be silenced.

Although you’ll hear outrageous lies about Israel, you’ll rarely be given space to unpack the falsehoods and, while history and current events are complex and fascinating, the accusations you’re most likely to hear about Israel are reductionist ones.  These slanders show up repeatedly. They coalesce into soundbites for shouting through a megaphone or for framing an academic article.

It’s time for our own, and truthful, soundbites.

Here’s my try at one-liners addressing familiar accusations against Israel. Each is followed by a few lines of simple explanatory statements for the occasions when there’s space to say more. And of course, there is much more to say. Although I’ve included the specific accusation that prompts each soundbite, notes that those accusations against Israel are often leveled at random, regardless of specific events.

No Jews are allowed in Gaza. No Jews have lived there since 2005. Hamas is a terror organization that rules the people who live in Gaza. They force children to be soldiers. They shoot their own people who don’t follow their rules. Over one hundred children were killed while working to build Hamas terror tunnels. Hamas hides their weapons in schools and mosques and fires rockets at Israeli civilians. Many Palestinians are killed by Hamas rockets that land inside Gaza. Although it is Hamas that controls Gaza, you will hear “Free Gaza” as if Israel rather than Hamas is in charge there.

Hamas leaders say clearly in their speeches and in their charter that their goal is to rid the world of Jews. Israel tries to protect its citizens and tries to respond to attacks by targeting terrorist leaders and their weapons. The population of Palestinians and Arab Israelis has grown exponentially since 1948 and yet Israel is accused of committing “genocide.”

#3   All Hamas rockets are aimed at civilians.

It is a war crime to attack civilians. It is also a war crime to launch rockets from civilian neighborhoods. It’s a war crime to use children as soldiers. Terrorist organizations are ok with committing war crimes. And yet the Israeli Defense Forces, a citizen army defending its population, is accused of war crimes.

The Iron Dome does not attack; it is a shield. It intercepts an incoming rocket before it can land. Shrapnel can still fall and cause injury and about 10% of the time the Iron Dome is too late to stop the rocket. The Iron Dome is a nonviolent way to respond to the rockets, all of which are aimed at Israeli civilians: Jews, Christians, Muslims, and Druze are killed by Hamas rockets. But you will hear that the Iron Dome is an “unfair advantage.”

#5   The IDF takes extreme measures not to harm civilians.

Israel uses precision calculations to target Hamas leaders and their weapon sites. Because Hamas stores weapons in civilian areas, the IDF warns residents with text messages, knocks on rooftops, loudspeakers, and phone calls so that people can leave the area if they may be in harm’s way. Richard Kemp, commander of the British forces in Afghanistan, considers the IDF to be the most moral army in the history of warfare. But Israel is accused of using “disproportionate” force.

About 100 of the world’s countries are newer than Israel. The existence of none of these countries is questioned.  The Jewish State was established in the way that many other Middle Eastern countries were established. But it’s the only one accused of being “colonialist.”

Jews have been scattered to all parts of the world over the centuries. Skin color is not relevant to being Jewish as Jews are every skin tone. They are culturally, religiously, and genetically a distinct ethnic group. They have been persecuted for their difference, for not being white, or for not being Christian or Muslim. In spite of this reality, they are being called “white oppressors.”

#8   Jews are indigenous to Israel.

By every measure of what it means to be indigenous, Jews are indigenous to the land of Israel. Jews were sovereign in the land of Israel in ancient times and continued to live there throughout the centuries. Although many others held sovereignty for various periods of time, only the Jews made Jerusalem their capital. The archaeological, written, and historical record and the Jewish religious traditions maintained by Jews wherever they were living, including those who never left the Middle East, all tie them to the land of Israel. Yet they are called “European.”

#9   All Israelis have the same rights.

Israel is a pluralistic, free, and democratic country. It is a multicultural country with a Jewish majority, the only Jewish majority country in the world. It has a free press, religious freedom, and a democratic government.  Yet Israel is bizarrely accused of “apartheid.”

Arab and more recently Palestinian leaders have repeatedly rejected the opportunity for a Palestinian (or additional Arab) state. This is because they do not agree to the existence of one Jewish majority state. They want the whole area for a 23rd Arab majority state. That’s the meaning of “from the river to the sea.”

Admittedly, we’re at a rhetorical disadvantage. Anti-Zionist soundbites are well-established and much catchier than the Zionist ones I’ve suggested here. More importantly, the accusations to which we need to respond are treated as common knowledge and are repeated in classrooms and on news sites.

Whether online or in person, we’re unlikely to convince the accusers.  But we will be heard by many lurkers or passersby. The middle-of-the-roaders, or those afraid of being canceled, and others who know they’re being lied to by the media and on campus may listen. As a result, some who are now silent may begin to feel they too can speak out. And they’re the ones who most need to be reached.

About the Author
Cherryl Smith's new book is FRAMING ISRAEL, A Personal Tour of Media and Campus Rhetoric. She is professor emerita of rhetoric and composition at California State University, Sacramento. She has lived in Tel Aviv since 2016.
Related Topics
Related Posts
Comments
Advertisement