One long hot summer, when I lived alone in a little room with a big window, I worked nights at a bar in Berkeley, California. “You shouldn’t walk alone,” a guy named Psycho Mike told me. “You’re asking for trouble.” He reached into his pocket, deep. “Take it,” he said and he handed me a butterfly knife with an engraved handle. I practiced for a week — whoosh whoosh, flick and swish — ’til I knew how to use it. And I carried it with me. All. The. Time. (And one night, when a shadow deepened and turned into a man on the corner of Telegraph and Parker, simply holding it sheathed was enough to make him hiss “bitch,” and disappear.)

(I still spend too much energy wondering if my skirt is too short, or my shirt is too tight, or my heels are too high.)

When my friends and I go out, we watch each others’ glasses of Cabernet, or mugs of Guiness, or tumblers of whiskey, after one of us learned in the worst way possible that not doing so could mean waking up bruised and torn, with only strobe-light flashes of memory. (Thank God for the dark parts.)

We pee in pairs — not *just* because we want to share lipgloss and braid each other’s hair and take selfies, but because it’s smart to stay together. (See above)

I’ve been embarrassed to say “no” after thinking “maybe” and then changing my mind. (I don’t want to make him mad.)

One morning, I fell asleep on a crowded commuter train, and woke up with a stranger stroking my thigh, and I BLAMED MYSELF FOR FALLING ASLEEP AND WEARING JEANS THAT FIT JUST RIGHT IN THE FIRST PLACE.

When someone hollers “nice ass, baby” through a car window in a verbal drive-by, or — ugh, oh God, please no, NO — when he slows down, and pulls up to the curb, I tuck my head and try to shrink as though I’M TO BLAME for not wanting it.

And worst of all, when my daughter wants to dance naked in the living room, I’m afraid for her. But I don’t even bat an eye when my son wants to do the same.

And for all these reasons — and too many more — this is why #SlutWalk is important.

#SlutWalk is a worldwide phenomenon that began in 2011 when a Toronto cop said suggested that “women should avoid dressing like sluts” in order to avoid being raped.

And since then, there are #SlutWalks in cities around the world to protest all types of sexual assault, harassment, and victim-blaming.

And even though one #SlutWalk through one city won’t change the status quo, it’s part of the long march to change the conversation around rape, around harassment, and around blaming the victim.

And on Friday, beneath a billion watt sun, men and women took to the streets in Jerusalem to protest rape culture.

What is rape culture? Rape culture is when we assign blame to a woman for her own rape.

“What were you wearing when he pinned you down, honey?”

“So, how much DID you have to drink?”

“Why were you walking alone at night in the first place?”

“Are you sure you said no?”

So, in a city built of stone, in a city of ancient ways, in a city holy to the three religions that follow the patriarch, Abraham, skin became its own protest along with the signs that people waved.

Some women were topless. Some men wore dresses. Many marked their bodies with ink and paint: “I was raped.” “My body is only my body.” “Women demand safety on the streets.”

Was it shocking? Yes. But you know what’s more shocking? Rape.

And the fact that way too many people believe that women are somehow to blame for their own attacks is shocking, too.

My favorite sign of all time was this one: 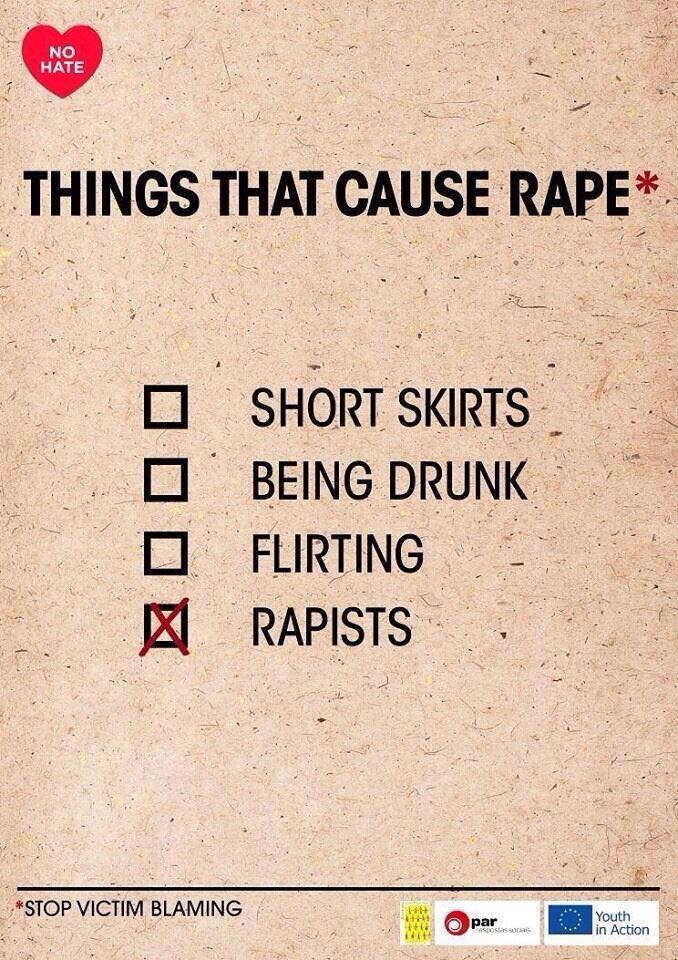 This is the overwhelming message that is so true.

Say it with me: There is only one thing that causes rape: Rapists.

But I’ll tell you something sad and dark: I know this intellectually — the way I relate to things I read on paper, or see in a podcast behind a screen, behind a veil. I know it isn’t my fault. But I’ve internalized all the tropes, and all the lies… and even though I fight against them, I am still not free.

And I know for damn sure that I want my daughter — and my son — to live in a different world. So thank you, Jerusalem.

We’ll keeping on walking till we get there.