The Blogs
Ran Bar Yoshafat
Apply for a Blog
Please note that the posts on The Blogs are contributed by third parties. The opinions, facts and any media content in them are presented solely by the authors, and neither The Times of Israel nor its partners assume any responsibility for them. Please contact us in case of abuse. In case of abuse,
Report this post.

I am often surprised when I hear the incorrect explanations for terror attacks in Israel. I feel like I have heard it all. One student told me the terror attacks are due to Jewish provocation on the Temple Mount. Another claimed they were occurring because of settlement expansion in Judea and Samaria. I have even heard that the terror attacks were a result of the hot weather or religious Muslim holidays.

Using one of these four justifications does injustice to the victims and turns the terrorist into an idiot who acts on irrelevant considerations. It cheapens the lives of the victims and gives approval to terror and violence.

In my spare time, for over 60 months, I have been reading Shin Bet reports about terror attacks in Israel. Over the course of this time, there has been, on average, three to five attempts each day to murder Jews. In the month of June, for example, a particularly “slow” month, there were 94 attempted terror attacks. This number does not include stone throwing and lynch attempts.

None of these events have anything to do with actions taken by the victims, the policies of Israel or the weather. We suffer from terror attacks for other reasons, hatred of Jews being a strong one. Many people who live under the terrorist regime of Hamas or the dictatorship of the Palestinian Authority have been indoctrinated to believe Jews are the offspring of monkeys and pigs, and that it is morally just to murder Jews in the name of religion. Others believe that in order to achieve nationalistic aspirations they need to hurt as many Jews as possible. 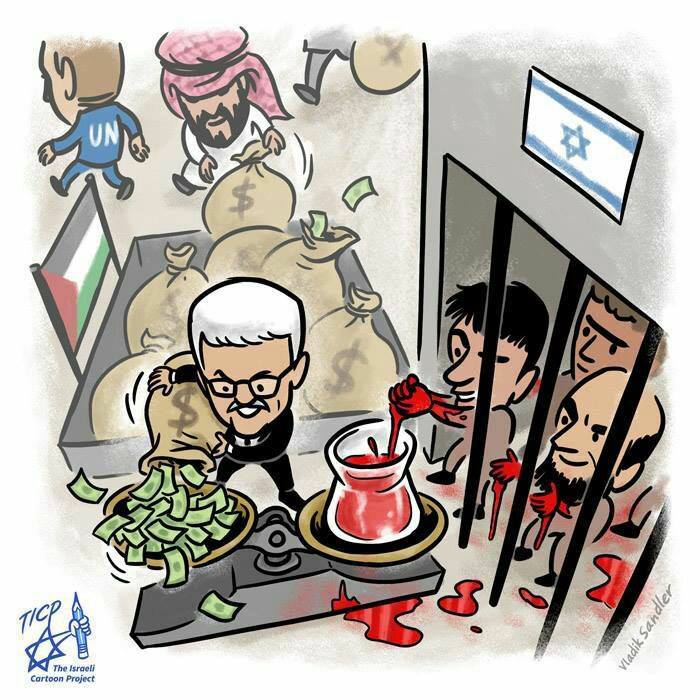 Perhaps another crucial reason for these acts of terror is the fact that under the Palestinian Authority terrorism has become an industry, and a very profitable one. Under the PA, anyone who murders a Jew and goes to jail receives more money than a teacher does. Whoever murders a Jew and dies in action receives a town square or a soccer team dedicated in their name and money sent to their family.

The equation is this: The more Jews you kill, the more money you will make.

This year the Palestinian Authority spent 153 million dollars on payments to terrorists.

This is why we have terror attacks.

If you decide to take part in educating people about this, as a first step, we would be pleased if you would go to our Facebook page, share the cartoons there, drawn by top pro-Israel artists, and help bring truth to the forefront with their humorous but direct messages. LIKE them, SHARE them, and be involved!