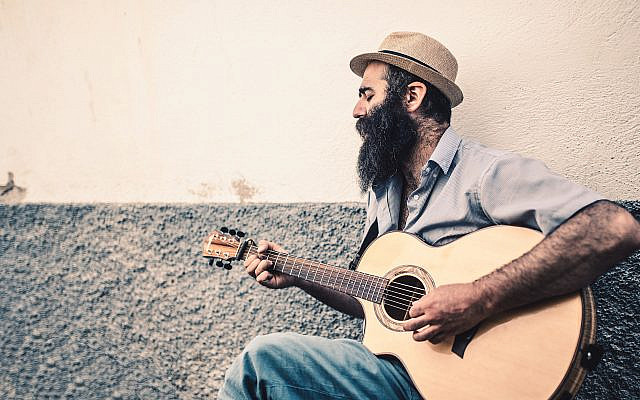 This modern man Habib bin Habib al Fulan buzzes into the first pawnshop in Florida City with shoulders sunk down and a thousand-mile stare. He clutches an acoustic guitar by the body like a farmer holding a chicken.

He joins a line of people and waits.

More people buzz into the store.

When it’s his turn, he gently places the string instrument on the counter for the pawnbroker to inspect.

And a good moment later:

“What kind of a name is that?” says pawnbroker #1, while rubbing a decal on the edge of the sound board.

“It’s from the Middle-East. My grandparents are from Palestine. But I was born in El Salvador.”

“That’s some mix you got there,” says pawnbroker #1.

Habib looks down. The pawnbroker studies him up and down with a smirk.

“You lost the case?”

“Let me have a little talk with my brother Joe.”

Pawnbroker #1 takes Habib’s guitar with him and goes over to a small office in the back where a man sits typing into a computer.

Habib waits patiently, looking at the guns in the glass cases and the other guitars that hang on the wall. He compares hunting knives.

The two pawnbrokers laugh. Habib forms an uneasy smile in their general direction.

After talking with his brother, pawnbroker #1 finally returns with the guitar, handing it back to Habib.

“Thank you,” says Habib, as he takes back the guitar and leaves the store.

Habib walks to the store next door. The pawnbroker behind the counter of the second pawnshop is a tall, overweight man in a black Miami Heat t-shirt and a green hunting cap.

The store is not busy.

Habib smiles and hands him the guitar.

“So your mother is back there now?”

“Yes, she got tired of America. Too much work, you know.”

“When did she leave?”

“Do you think you’ll ever go back?”

“But the country is in better shape? I mean they got peace now and all.”

“I don’t know if you remember the movie Salvador directed by Oliver Stone?”

“That has got to be one of my favorite movies of all time. Everybody knows that was the movie that kept that whole mess down there from turning into Vietnam. God knows Ronald Reagan was getting ready to ship our boys off. I gotta tell you, Oliver Stone is a fucking maniac with his storytelling.”

“That was a pretty good movie.”

They both are silent for a moment.

“Let me think about it,” says Habib and grabs his guitar.

“It was good talking with you man.”

The third pawnshop is across the highway in a building in the shape of a flying saucer. The front of the building is littered with banners advertising special interest rates and discounts.

Habib immediately enters upon hearing the buzzer and hands the guitar to the first available pawnbroker who happens to be an older lady with white, puffy hair and a long sleeved, buttoned down American flag shirt.

“Well, what do we have here,” pawnbroker #3 says inspecting the guitar curiously.

“It’s a Gibson. Like brand new. Not a scratch.”

“And your father left your mother just like that?”

“That is just plain mean. To have the gall to ask your mother for a divorce the moment you all arrive from a trip to Disney World that he didn’t even want to go on, that takes some nerve.”

She studies Habib’s face, like exploring for any sign of emotion. She then puts her hand over his hand which had been leaning on the glass case.

“I’ll tell you what though,” pawnbroker #3 says. “The Lord is watching and the bad things we do come back to us. That’s the rule. So pray for your father. Pray for him and forgive him.”

They look at the guitar at the same time.

“This is all I have. My wife and I are about to get evicted from the motel down the street.”

“I’m so sorry to hear that. I really wish I could help you son. There is another pawnshop about a quarter mile from here. You could try them.”

“Thank you anyway,” says Habib as he grabs his guitar and leaves the store.

He crosses the street again, walking for about three blocks. The day is cloudy, hot and extremely humid. The heat is exhausting. The street noise is deafening. Habib continues down a narrow side road off the main highway until he reaches the Black Seas Motel. He takes out his motel key from his pants pocket, leaves the “Do Not Disturb” notice hanging from the door knob, and unlocks the door and enters room Seven.

The curtains are drawn and there is a figure in the bed covered from head to toe in a white sheet. The window A.C. unit hums, working its lowest temperature, giving the room an unnatural chill.

He puts down the guitar on a table next to the bathroom and then sits down on the floor next to the bed crossing his feet like a Boy Scout in front of a camp fire.

The small figure in the bed does not move, but there is a limp hand that hangs from the side. The hand is pale and it has fake purple press on nails with little constellations on them.

“I’m gonna get the money,” he says, addressing the figure in the bed. “I’m not worried. I just wanted to see how you were doing. I have leads honey. I got good leads.”

Habib rubs the shaggy brown carpet with the palm of his hands. At that moment, he doesn’t look up at the bed, but it’s like he is talking at it and not the figure in the bed.

It’s a small, stuffy motel room and the mild light from the gray day doesn’t stand a chance against the thick, flowery curtain. The dying light that barely penetrates gives the room a dreariness that hangs in the cold center, right above the bed and seems to swirl like a downward spiral with the intensity of existential arrows pointing at the obvious.

“Please say something. Are going to stay in bed all day? You don’t believe me? That’s okay, I was lying. I love you. I’m always gonna love you.”

Habib gets up, grabs the guitar and leaves the room making sure the “Do Not Disturb” sign hangs visibly from the door knob. He walks north on the main highway with the neck of the guitar over his shoulder and when the cars honk he salutes them back with a shy wave and a strange frown. He continues for almost a mile until he finds the fourth pawnshop. The building is gray as the sky and it’s empty inside.

He presses the buzzer, opens the door when it unlocks and walks right up to pawnbroker #4 who is sweeping broken glass next to an empty display case.

The Pawnbroker leans the broom next to a wall and goes behind the counter.

“I’d like to know what’s the most I could get for this guitar,” says Habib, and gives him the instrument.

“Let me take a look. You want to pawn it or sell it?

As he holds the guitar, he looks it up on his computer.

“We don’t sell too many acoustic guitars but I have a regular who was looking for this exact Gibson model. I can give you $1000.”

“Thank you. You don’t know how bad I need this money. I was just twelve hours from me and my wife getting thrown out in the street.”

“I lost my job three months ago and my wife hasn’t been able to work.”

“You know what? I’m actually looking for someone to work the graveyard shift at one of my stores on the other side of town. Do you speak Spanish?”

“Good, just take this application and pen and fill it out for me.”

“Let me get the cash for you.”

Habib starts to fill out the application form. He puts down the motel for his address.

Pawnbroker #4 returns with the money, counting it in front of Habib who has tears in his eyes.

“Yes,” Habib says, wiping his face with his hands. “My wife didn’t think I could get the money.”

“She doesn’t believe in me. People used to say to me, ‘Habib what you doing with a girl like that?’ And I didn’t care what they say because I love her and it’s my decision who I want to be with. But she was so drunk on that strawberry Cisco yesterday, getting real hysterical, accusing me of not being a real man, of not following the rules of the world, that I’m never gonna provide for her and that I will never be great. And that hurt when she said those things, it hurt even more than when she punched me in the face.”

“She lives to fight. I got real angry you know, and I choked her until her feet stopped kicking. So she’s back at the motel pretending like she’s dead.  But that’s just how she is.”

Pawnbroker #4 looks at Habib carefully now, with a gaze that shifts from pity to fear.

Habib continues: “I’ve been through a lot. And right now, this is a new life. She can take it or leave it.”

Pawnbroker #4 reaches slowly for a small, silver revolver under the counter.

Habib catches his own reflection unexpectedly in a mirror that hangs next to the shot guns. He recognizes it. It’s the face of a hyena scavenging.

The space between the two of them contracts, and time stops, and no one enters the store.

Originally published at The Acentos Review in February 2011.

A short film based on “This Modern Man is Beat” can be seen on Amazon Prime.