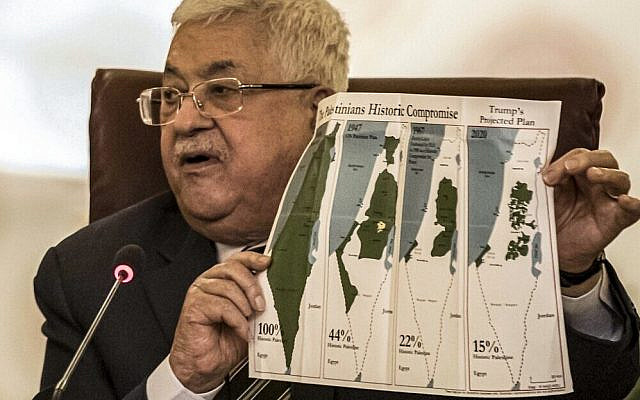 Palestinian Authority President Mahmoud Abbas holds a placard showing maps of (L to R) historical Palestine, the 1947 United Nations partition plan on Palestine, the 1948-1967 borders between the Palestinian territories and Israel, and a current map of the Palestinian territories without Israeli-annexed areas and settlements, as he attends an Arab League emergency meeting discussing the US-brokered proposal for a settlement of the Middle East conflict at the league headquarters in the Egyptian capital Cairo on February 1, 2020 (Khaled DESOUKI / AFP)

Increasingly over the years, the annual commemoration of the day in 1947 that the United Nations voted to partition Palestine into two states – one Jewish, one Arab – has turned into an anti-Israel hate-fest. Events at the UN and around the world observe the day in solidarity with the Palestinians, using decades-old slogans, resolutions, and calls to action.

That the UN is the locus for these events is no surprise. Let’s remember that the UN has, at least since the 1970s with the passage of the infamous Zionism is racism resolution, been more interested in ideological warfare against Israel than real change.

The incongruity of this annual anti-Israel grandstanding is contrasted to the huge changes for better that are taking place in the region with the growing normalization process between a number of Arab states and the Jewish state. The element of breaking from a past that has harmed so many diverse peoples in the region compared to the wallowing in grievances going back decades is remarkable. It speaks to actually trying to change lives for the better as opposed to scoring political points that give the illusion of helping the Palestinians when they actually ensure their continued suffering.

It is easy to say that the normalization process fails to speak to the Palestinian issue and therefore is not a good model for behavior on that issue. While the Israeli-Palestinian conflict is more complicated and certainly more up-close, and the Palestinians have a set of grievances that are different and far deeper than the Arab states, it remains a simple and central fact that the way forward, to the benefit of all, is through a realistic assessment of problems and solutions rather than living in a world dominated by illusions.

The Palestinians rejected the 1947 plan that would have granted them an independent state. But it should be remembered that the Zionists were not all that happy with it either – including with the fact that it gave them no control over Jerusalem – but living in the real world they accepted what was offered.

And that initial Palestinian rejection became the model for variants through the decades. What it did not lead to was a better situation for the Palestinians.

There is plenty of blame to go around for why the Palestinian situation remains fraught and entrenched. To be sure, Israel has its share of responsibility, including with the continued expansion of Israeli settlements, policies in the West Bank that have deepened Palestinian indignities and suffering, and an apparent acceptance of the status quo, rather than bold moves that would promote direct negotiations and concrete solutions.

Having said that, the one consistent causative factor that stands out even more starkly today than heretofore because of regional changes is the continued dominance within Palestinian leadership and their allies of the idea that nothing else matters as much as rejecting any legitimacy for the Jewish state.

The Arab normalization process highlights the regressive elements of this static Palestinian approach. The decisions by the UAE, Bahrain, Morocco and Sudan to normalize relations with Israel were not merely statements that they no longer would be held hostage in their dealings with the Jewish state to the veto of the Palestinians. They reflected a profound change and made clear that their country’s interests would take precedence over any theoretical allegiance to the Palestinians, much like Anwar Sadat made the historic decision to make peace with Israel more than four decades ago.

Less talked about, but no less significant, was that these decisions to normalize relations with Israel were a direct rejection of the worldview that governed the Arab world and more specifically the Palestinians for years: that an anti-Israel ideology takes precedence over any other regional challenge in a Middle East facing a multitude of crises and struggles – from climate change to water shortages, to technological backwardness to unemployment of the masses of young people.

Recognition by these Arab states that cooperation with Israel could assist in addressing some of these problems was a dramatic step forward and a critical message to the Palestinians that the old rejectionist philosophy fails to meet the very real needs of the people today. In effect, the Arab states were saying, it’s time for all of us to grow up.

Whether any of this will impact Palestinian leadership or the anti-Israel movement is doubtful considering their history. But there is a crucial step that over time could impact Palestinian thinking, which is for international bodies like the UN and global media to absorb the messages that the Arab states are conveying and recognize that they, the international community, actually can play a constructive role for the region generally, and for the Palestinians in particular.

The anti-Israel bias, as seen in the way November 29 has been used as an ideological weapon against Israel, has not only been unfair and harmful to Israel. It has also served to reinforce destructive illusions among the Palestinians, which have predominated since 1947. One more anti-Israel resolution, one more BBC piece condemning the Jewish state, one more terrorist attack, and Israel will disappear, or so it went. These illusions, as noted, have hurt Israel but harmed the Palestinians far more deeply by locking them into the same old thinking.

Still, by emphasizing that there are other issues that must and can be addressed, and that Israel can be part of the solution not simply THE problem, all kinds of possibilities open up.

In sum, the normalization process should be seen as an opportunity not –only within the region but outside it – for the international community to follow the path of realism and encourage the Palestinians to do likewise.

Let’s make November 29 a day of possibilities instead of one of destructive illusions.