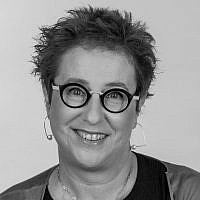 The Blogs
Avital Sandler Loeff
Apply for a Blog
Please note that the posts on The Blogs are contributed by third parties. The opinions, facts and any media content in them are presented solely by the authors, and neither The Times of Israel nor its partners assume any responsibility for them. Please contact us in case of abuse. In case of abuse,
Report this post.

In 2010, in the aftermath of the catastrophic earthquake in Haiti, a New Jersey-based Jewish philanthropist donated his children’s bar and bat mitzvah party tent, a beloved family memento, to use as a mobile operating room by organizations on the ground treating the wounded. Just last week, he did the same with a new tent he had bought for similar events.

He wanted to continue this tradition despite unrelenting odds in Haiti — unrest, poverty, and widespread decimation from the earthquake over two weeks ago made worse by tropical storm Grace. This outsized desire to help is quite common among Jews and the wider Jewish community moved by such tragedies.

Jewish humanitarian groups in turn respond to our fellow human beings’ suffering on a scale that in 2017 alone amounted to $125 million a year, according to an Olam study of Jewish groups responding to natural disasters and international development needs. One can only imagine how much this figure increased in the last five years and that that number would be exponentially larger when you account for Jews supporting nonsectarian humanitarian groups.

So where does this reflex come from? And how are we harnessing it for Haiti?

The desire to respond to our neighbors’ suffering emerges not just from our prophetic tradition or history as a persecuted people, but from the simple reality that we Jews do not live on an island. We have non-Jewish family members and friends, members of our communities, and we are deeply aware of universal needs. The pandemic deepened that realization and taught us that we are interconnected to our neighbors in ways we never imagined.

If we do not support one another, do not engage in pursuits of the common good, the consequences can be deadly. That’s why synagogues and other Jewish institutions around the US not only sought to vaccinate our elderly and poor, but reached out to others in the wider community to get folks the care and resources they needed to protect themselves from COVID-19.

We’re also already positioned to fulfill this role on a global scale. Over the decades, the international aid space has become replete with Jews, Jewish organizations, and Israeli representation. This is more than an anomaly. It demonstrates a welcomed presence and our collaborations with people of a variety of backgrounds proves that there is an eagerness to create change together.

My colleague Danielle Butin, the CEO and founder of the Afya Foundation, a New York-based nonprofit that we work with to deploy critically needed medical supplies to disasters zones, often expresses that sentiment when relating to her work. She was inspired to do this work because of her Jewish upbringing, values, and a tradition of chutzpah that inspired her choice to work in this field in the first place. For her, it’s not  “us vs. them,” but a collective of people forging their talents and dedication for the ultimate good of all.

That point is underscored by the fact that innovation in the international aid space has benefitted from expertise in crisis management and social entrepreneurism developed by Jewish people and Israel. From Israeli AgTech and trauma care, to cutting-edge social service models and grassroots advocacy efforts drawn from the US Jewish community, we infuse hope into a cycle of emergencies that are seemingly without end.

This is why we must now act to do more to harness the power of the Jewish collective to make the most impact on the ground in Haiti. The Jewish community has done it before in 2010 and 2016 and our philanthropic leadership remains committed to acts of arevut, mutual responsibility, not just for our fellow Jews, but for our neighbors. The power of the Jewish Federations to mobilize in the face of crisis, including in Haiti today, speaks to this. Foundations and individual donors are similarly primed to leverage giving through cohorts matching their dollars and shared pursuit of positive and sustainable change.

Our well-developed ability to educate and enlist our audiences has increased through technology and social media. We should redouble our efforts to make them understand how high the stakes are in Haiti – in lives lost, in sheer human need, and in the irreparable damage caused by not stepping up. We should direct them to groups already intervening in Haiti, including the American Jewish World Service, IsraAid, World Jewish Relief, and my organization, JDC. We have the local connections, partner relationships, and ability to deploy funding and expertise to places where they will have the most impact and empower Haitians to build back better for themselves.

As a people, we are well into the month of Elul, a time of introspection and heartfelt efforts to craft a better year ahead. By the time Rosh Hashanah commences next Monday night, we will have done this work in the midst Haiti’s tragedy and numerous important challenges, like Afghanistan and the ongoing pandemic, requiring our attention.

Lost to those headlines will be two Haitian women badly burned while cooking when the earthquake struck. Their wounds went untreated for seven days other than with herbal remedies, until a medical team we deployed with Heart to Heart International reached them. Because of the care they received, they were able to begin to heal from their infections and will be able to once again provide the nourishment their families and communities need.

In our collective response, we’ve begun building a new tent, indeed a sukkah, of hope, not just for Haiti, but for all those in need of our care.