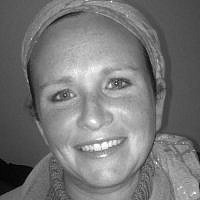 The Blogs
Chaya Kasse Valier
Apply for a Blog
Please note that the posts on The Blogs are contributed by third parties. The opinions, facts and any media content in them are presented solely by the authors, and neither The Times of Israel nor its partners assume any responsibility for them. Please contact us in case of abuse. In case of abuse,
Report this post.

Did you gulp? Gasp? Sigh empathically? Did you think something along the lines of:

How are you coping?

Is it harder now that she’s a teenager?

This whole approaching-the-teen-years time period is something I was warned about ever since I gave birth to this daughter. As if the first birth wasn’t hard enough, some people felt an urge to inform me, “Hah! You think the newborn thing is hard? Just wait until she’s a teeeeenager!” I was like, can’t they just be in my moment, instead of theirs?

As a result of all of the fear mongering, (including my own, based on my teenage years being trying for my parents), I treat these impending adolescent years with a bit of trepidation – worried we’ll be amiss on navigating the teenage thing. Yet I keep that worry in check, steadfast in my convictions that we will figure it out because ultimately we trust our instincts. In any case, I’ve said she’s acted like a teenager since little-hood: In kindergarten, she was six going on sixteen. After all, kids strive for their independence even from babyhood. Even the terrible twos has an official name to its stage. The teenage years are simply more challenging, because once they’re that old, they have more physical power to implement doing whatever they want, resulting in increased and sometimes horrific power struggles.

A challenge came to me last week. Our daughter had a sleepover with her performing arts summer camp. They are twelve girls, ages 13-15, in a program run by Rachel Factor. Now if you know anything about Rachel Factor, you’ll know she’s running a wholesome, trustworthy environment. So I feel secure about a sleepover with this camp, especially as it’s chaperoned by Rachel Factor herself, as well as other camp teachers.

But it’s Israeli. Which means that a sleepover entails not just going to sleep late, but trying to sleep not a wink. Even Rachel Factor hadn’t been privy to such slumber parties in the US – girls went to sleep late, but not not at all. But when their night swimming activity doesn’t even begin until 11:00 PM, it’s no wonder they thought they could just go all night.

Our daughter went to sleep at 3:00 AM. Not an all-nighter, yet still sleep deprived. A couple of the girls did manage to stay awake the entire night.

Sleep or no sleep, they were awoken at 8:00 AM for intense yoga. This is not just camp – it’s performing arts summer school – whose six-hour days involve serious acting classes, voice training, dance lessons, and yes, the yoga. They don’t mess around, even after sleeping minimally. So when our daughter arrives back home at 2:00 PM, she looks zombie-esque. Her eyes are widened and whitened, and she barely musters a, “Hello, Imah,” before throwing down her luggage, grabbing a glass of water and proclaiming, “I’m going to go take a rest.” So up she goes to her bed, undisturbed by any of her younger siblings’ rambunctiousness.

After two hours, I tell her she can sleep another half an hour, otherwise I’m waking her up so she won’t be jetlagged. “OK,” she agrees, groggily.

So I wake her up that half an hour later, and she comes down, eats, and converses normally. Yet that widened, whitened, zombie-esque look in her eyes remains.

But you see, her youth group has an activity that night, starting at 8:00 PM. So I say, listen, you really need to go to sleep on time tonight so that your body can return to normal. And by the way, you still have responsibilities – for instance, you have to get up and help the family get ready for Shabbat tomorrow. No cashing in on “too tired” on Abba and me. So, how about you stay one hour – until 9:00 PM? She says, OK, yeah, I’ll just stay until 9:00. In my honesty though, I know it will be hard for her to peel out of there after only an hour of the activity.

What? Who said it was her decision? And I LOL about her “I’m not tired” claim, recalling vividly those widened, whitened, zombie-esque eyes.

Uh-uh, babe. She needs sleep, and she needs to stand by her own time commitments to us.

Yet part of me is still the immigrant, wondering if I’m being too “American” by fostering the boundary of a reasonable bedtime. We Anglo parents often quip that Israeli kids don’t have bedtimes, even as young as toddlers. So I wonder if she’ll hate me for insisting she come home – that she’ll claim she’s the “only one” who had to leave early.

I dismiss that worry. Instead, I go with my instincts, mustering my parenting confidence about what I know is the right thing to do.

In she walks at 10:20 PM. I expect resistance, resentment, and a full-on disagreement that she could have just stayed with her friends until the end of the activity. But she just walks in neutrally, so I say nothing.

Instead of getting angry that she didn’t come home on time, and even claimed she was going to do whatever she wanted, I go positive: Her father and I greet her warmly, joking about how she “wasn’t tired.” Which she still claimed not to be. We explain that she is high on adrenaline, so her body is tricking her into thinking she isn’t tired. She gets it, laughs along with us, and sits down to eat a bit. And in the midst of wanting to converse ad nauseum, we interrupt, “Ehem, it’s time to go to sleep, Love.”

She gets ready for bed. Meanwhile, I fall asleep on the couch.

I’m awakened by her softly kissing me on the cheek, “Good night, Imah.”

And then this happens: She leans over to my ninety-percent-sleeping self, and whispers into my ear: “Imah, thanks for taking care of me. For telling me to come home to go to sleep.”

Now that certainly woke me up.

I’m so gratified and relieved that my parenting instincts are appreciated by the very child I was afraid would argue against them. Not just as a teenager, but as a teenager growing up in a country different from the one in which I grew up.

I respond, “Thank you – thank you for your maturity to know that.”

About the Author
Chaya Kasse Valier lives in the most Jewishly-eclectic place on earth - Nachlaot, Jerusalem - with her husband and their blessed four daughters and a son. She works as a content writer, doula, and masseuse. Chaya recently published "SECOND LABOR: Mothers Share POST-Birth Stories," a compilation of twenty-four mothers' experiences after having a baby.
Related Topics
Related Posts
Comments