Empires rise and fall. Countries rise and fall, Most of these either self-destruct or become corrupt. Even today we see countries self-destruct, take for example the UK and Brexit. So, what can we learn from history? How can we bring history alive? Many of us often walk around Jerusalem and other places not knowing the history, stories of the place. I remember in High School, I only got turned on to History when I had a dynamic teacher,

By providence, I came across an interesting young guy with an unusual name. Nachliel Selavan, originally from Jerusalem’s Old City, is back in Israel after seven years of teaching full-time in the United States, developing his unique and engaging method of learning Torah through tour, travel, and archaeology. 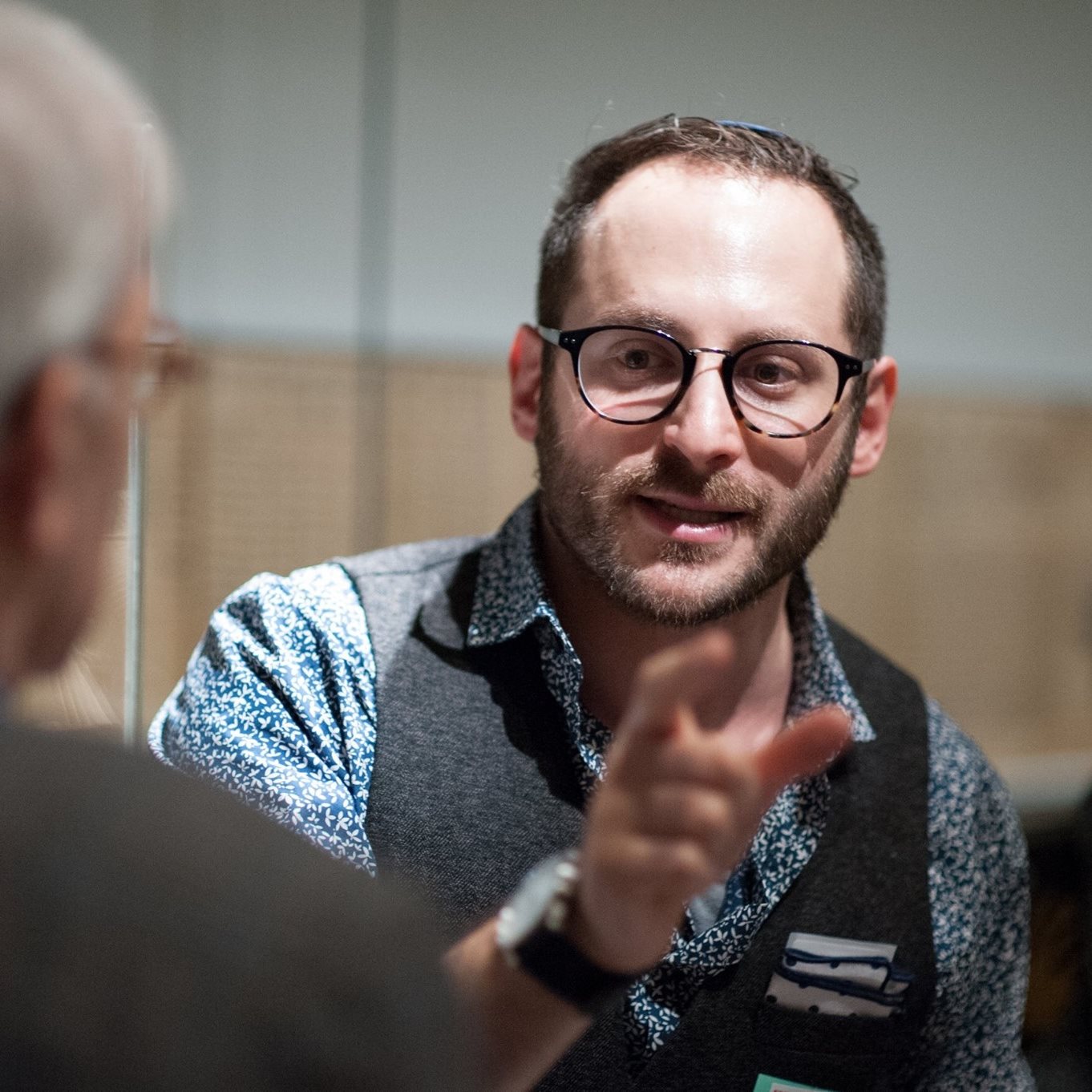 Nachliel created and delivered an integrated learning and museum tour program for both school and adult educational settings at the Metropolitan Museum of Art, and has hosted similar pilot visits to a dozen museums in North America, and a few museums in Europe and in Jerusalem. He also teaches and engages audiences through virtual tours and social media, and has recently joined a Tanach Study podcast called Parasha Study Plus, delivering a weekly episode of Archaeology on the Parasha.

He has recently re-launched his Museum Tours Website https://www.museumtours.co.il/ where he aims to inspire to bring the Museum to Life and will focus bring history alive at the Israel Museum. 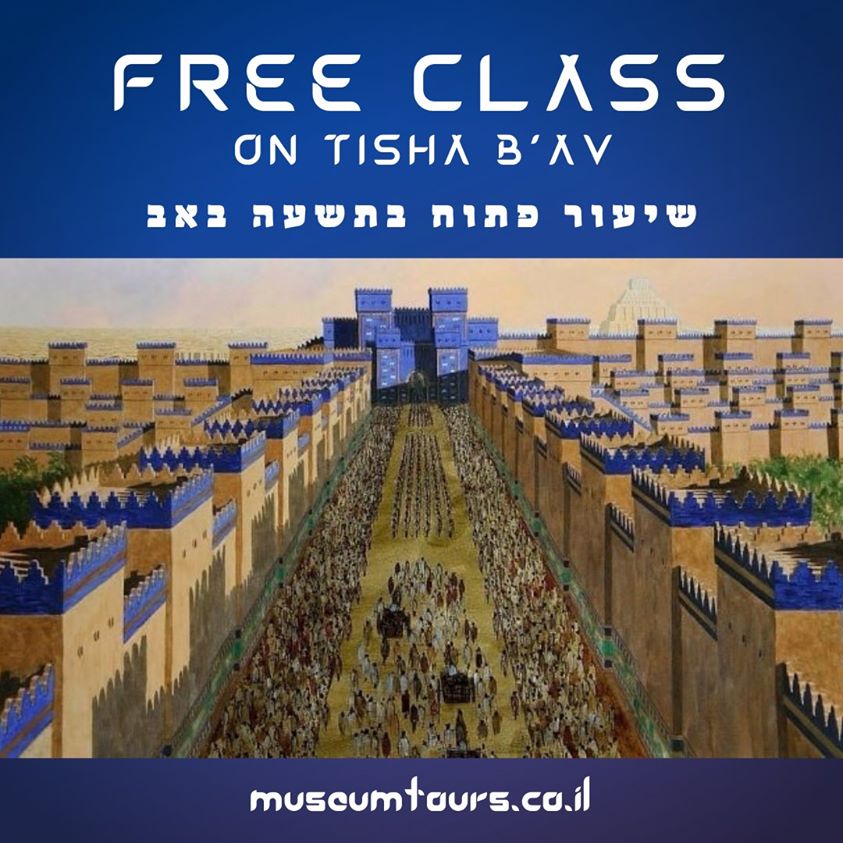 He is hosting a free Virtual Tour on Tish B’ Av. In this, he aims to bring History alive. He will be talking about the “The Age of Empires: Israel and Judea under the Assyrian and Babylonian yoke”

Most of the lamentations about the First Temple period destruction are focused on the corruption of the society in the kingdom of Judea, and its consequent destruction and aftermath. Samaria, Capital of the Kingdom of Israel and the “Ten Tribes” was destroyed by the Assyrian Empire in 722 BCE, its many inhabitants methodically dispersed throughout Mesopotamia over a long period of time; Jerusalem and its temple were destroyed by the Babylonian Empire in 586 BCE, its relatively small population were forced to relocate to Babylon, intact, while a few were left in Judea under the governorship of Gedalia ben Ahikam. That as well didn’t last, Gedalia was hastily murdered by a political rival and most of the remaining Jews fled to Egypt”

Before continuing with Nachliel’s insights, I want to spend a few moments contemplating on  Corruption. A very popular theme in the news today. Yeshaya in the Haftorah of Chazon after rebuking the Jewish People for hiding their corruption behind the mask of piety. In a calling, which is the source of Tikkun Olam – he challenges us to Learn to do Good, Seek Justice, assist the downtrodden – orphans and widows, In simple terms Be Nice! If people and our leaders were genuinely nice, then Corruption would cease and Peace would exist. This for me is the message of Tisha B’av. The rest is just commentary.

Nachliel continues “ And yet the exile of Judah returned, rebuilt the Temple which was later destroyed by the Romans, and returned again to its homeland. We consider ourselves “Jews” because of the association with Judea, the Kingdom which was ruled by the house of David of Judah, though it included the Levites who served in the Temple, the Tribe of Benjamin, and some of the other tribes who escaped the Assyrian dispersion. The Jews have returned to their homeland, but what happened to the other Tribes?

Shomron Kol Titen essentially asks this question. Ibn Gvirol refers to Israel and Judah as two sisters. Samaria as ‘Ohaloh’ (His tent’), a reference to the Mishkan (Tabernacle) of Shiloh which dwelt in its borders, and to Jerusalem as ‘Ohalibah’ (My tent/Temple dwells in her), a reference to the Temple; these sisters are in a dialogue between two, each competing for seniority for their suffering.

Ohaloh cried out “my iniquities have found me! My children have left me for another land!” and Ohalibah cried “my palaces burn!” and Zion says “G-d has forsaken me!”.

So how lost are the Ten Tribes? In order to ascertain this, we must understand the Assyrian method of deportation, which lent period in history the name “the Age of Mass Deportation” (Cogan, A Raging Torrent, introduction).

Mass deportation is a hallmark of Neo-Assyrian conquests, which began with Tiglash Pilesser III, also known in Tanakh as Pul (Tugulti-pulu-usšur). Different levels existed, from the deportation of specialist craftspeople to assist in various building projects, to the deportation of entire regions – depending on its level of defiance.

This practice had several strategic benefits to the Assyrian Empire while providing labour and people to build and inhabit its new cities. It reduced the opposition in the peripheral territories, as rebellious populations were resettled in foreign environments where they needed imperial protection against local hostility. Moreover, they would not escape, as they were unfamiliar with the country. Nor did they have the territorial imperative of fighting for their homeland. Nor did they have an organic group of their countrymen who would band together, as they were dispersed over wide areas, to either side of the Assyrian Empire’s homeland (according to Prof. Ran Zadok of Tel Aviv U.).

All of this points to an important fact: Deportation was a gradual, and expensive, bureaucratic, and administrative process. The deportation of the Ten Tribes could not have been carried out all at once, and while the area was being repopulated with foreigners who will come to be known as the Samaritans (II Kings 17:24-34), it is highly likely that members of the Ten Tribes continued to inhabit their homeland for decades after the destruction, maintaining a level of ethnic and religious identity.

All of this may help us understand how Jeremiah could fathomably have identified members of the Ten Tribes and brought some of them back.

Are the Ten Tribes completely lost?

It is possible that those who remained suspended, awaiting deportation, had some interaction with, or influence from, Judea. This is perhaps why we can still find people who know they come from the tribe of Dan, Menashe, or others.

Although recent studies into the topic have delved into this story, the mystery surrounding the vanishing of the Ten Tribes and their current whereabouts is nowhere near unraveled.

Even the legends we have about their whereabouts are mysterious, or perhaps even mystical: Somewhere beyond the magical Sambation River, named for its impassable torrential currents which only settle on the Sabbath, effectually undermining any attempt to cross it during the week— as the Lost Tribes beyond it are all Sabbath-observant. Thus, they are in effect cut off from the rest of civilization. Google Earth, anyone?

The Talmud in Pesachim 4a discusses how a person’s manner of speech may reveal an innate tribal association. (Writing this right after the public Torah reading of Vayechi, which describes the blessings of the various tribes, this seems quite timely.)

A certain man would regularly say whenever involved in conflict: Adjudicate my case [dunu dini]. The Sages said: Learn from it that he descends from the tribe of Dan, as it is written: “Dan will judge [ya-din] his people like one of the tribes of Israel” (Genesis 49:16).

The tribe of Dan was one of those exiled, as was Zebulun:

A certain man would regularly walk and say: The bushes on the seashore are cypresses, i.e., items located by the sea are more beautiful than those found in other places. They examined his lineage and found that he descends from the tribe of Zebulun, as it is written: “Zebulun shall dwell by the seashore” (Genesis 49:13).

And what of the Jews of Ethiopia (Beta Israel)? Or Bnei Menashe (Sons of Manasseh)?

All of these reveal some cracks in the notion that they are completely gone. But the mystery of the vanishing of the majority of their contingencies still remains one of the big mysteries of Jewish History. Isaiah, a prophet of redemption and consolation, tells us:

And in that day…the strayed who are in the land of Assyria…shall come and worship G-d on the holy mount, in Jerusalem (Isaiah 27:13)”

On a short virtual tour on Tisha b’Av, Nachliel Selavan will take his viewers into the Neo-Assyrian and the Neo-Babylonian Empires at their height of power and world domination. Exploring the sites, history, and archaeological finds from these ancient Empires, in an attempt to better understand and appreciate the context of our story. The tour can be found on www.museumtours.co.il/book-online

How Lost are the Ten Tribes? Rebirth of Shomron 2 of 4

Wine and Prophecy: The Rebirth of Shomron 1 of 4

About the Author
Jeffrey is a Blogger, Entrepreneur, and Philanthropist (we can only dream) living in Jerusalem. He is a young grandfather has five kids and four grandchildren. Jeffrey provides freelance CFO and Accounting services through www.persofi.com He is looking to spread the message of Ahavat Yisrael and Jewish Unity through the music and stories through www.souldoctorstories.com and blogging.
Related Topics
Related Posts
Comments