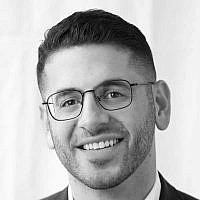 The Blogs
Brandon Wolfe
Apply for a Blog
Please note that the posts on The Blogs are contributed by third parties. The opinions, facts and any media content in them are presented solely by the authors, and neither The Times of Israel nor its partners assume any responsibility for them. Please contact us in case of abuse. In case of abuse,
Report this post.

I have been taught to be a Zionist from a young age. I studied at Jewish Day School, participated in USY, and spent summers with Ramah. I traveled to Israel with Birthright and completed an internship in Jerusalem. I am inherently biased to be pro-Israel.

The truth is – Israel is not perfect, and Israel makes mistakes. It is healthy to criticize Israel. That being said, I love and accept Israel with all of her flaws, and I recognize that Israel needs to take a better lead in solving the conflict.

The beauty of the Jewish people is that we strive to be a righteous people. The Jewish Community is divided on Israel. We have a very complicated relationship. We question if we are on the right side of history, but we have an unbreakable bond to our homeland.  As a people we are very critical of ourselves. It’s fair to hold Israel accountable when she is wrong. It’s wonderful and necessary to challenge Israel, because we want Israel to be the best version of herself. The Jewish people strive to be the light onto nations like we set out to be, and it comes at a cost.

However, circumstances change when you fire rockets at Israel.

Starting a war with Israel is a really bad idea. Israel will defend themselves, and they’re not going to pull any punches.

Would you expect Michael Jordan to pull punches in a game 7? Every battle is an elimination game for Israel.

Hamas is not firing rockets because of the events at Sheikh Jarrah. Hamas is firing rockets to kill Jews, any Jews. A day with one less Jew in the world is a great day for Hamas.

The strength of the Jewish people is that we are one people, even when we aren’t. When you go to war with one of us, you go to war with all of us. The Jews take survival seriously. This war needs to be a wake up call to the Jewish Community. We need to stand with Israel on a united front.

If you look at the situation at face value, the Palestinians are suffering, and Israel has an obvious military advantage. Nevertheless, Hamas’ mandate is clear and overt about their mission to kill Jews and wipe Israel off the face of the earth. We did not take the Nazis seriously, and the Nazis killed half of us. Israel is not going to apologize for taking Hamas seriously.

80 years ago, we were herded into gas chambers, and today we have the world’s most sophisticated Missile Defense System in the Iron Dome. Look at how far we’ve come – six million dead Jews to having the greatest pound-for-pound military in the world. The narrative of the Jewish people being the world’s victim is over. We are a force to be reckoned with. We are living in the greatest time to be Jewish and we can not take this time for granted. Instead, we need to embrace our strength and not apologize for it.

As Jews, we need to realize that nobody feels sorry for us. Historically, no one has felt sorry for the Jews. Hitler tried dumping us off to different countries before the Final Solution, and nobody would take us. The Holocaust happened because the Jews had no place to go. Israel is the reason the Holocaust will never happen again. If we want to remember the Holocaust, then we must stand with Israel.

While taking to social media is appreciated and necessary, we need to be more productive and effective in our pursuit of Israel’s safety and security. The preservation of Israel is an active and evergoing process. Just because there is a cease-fire doesn’t mean our defense stops.

The United States funds the Iron Dome. This is no accident. This is the result of a decades-long effort to build a strong US-Israel relationship. Taking an active role in preserving this partnership is the key if you want to ensure Israel’s existence. The best way to protect Israel is to get involved with AIPAC.

AIPAC is an American organization that lobbies Congress so the United States provides funding for the Iron Dome. AIPAC is not an extension of the Israeli Government. AIPAC only supports bi-partisan legislation. AIPAC empowers its members to educate Congress on the importance of the US-Israel relationship. AIPAC is not a charity.

AIPAC is our best and only opportunity to play a role in ensuring Israel’s security. I did not have the courage to serve in the IDF. Because of AIPAC, I am given a platform to defend Israel with tangible results, without enlisting in the Israeli military. Because of AIPAC, Congress funds the Iron Dome. Because of AIPAC, the United States stands with Israel.

Just because Israel is strong, does not mean we can afford to get complacent. We need to utilize AIPAC’s platform so Israel can continue to have the Iron Dome. When Israel is at war again, which is inevitable, Israel will still need funding for the Iron Dome. You can not build the Iron Dome the day you need it. We need to keep educating Congress on the importance of the United States having this special relationship with Israel in order for Israel to defend themselves by themselves (and have the Iron Dome). Unfortunately, the cards are stacked against us.

It is very easy to be against Israel. When you watch whats going on from the surface, the narrative can look like Israel is an apartheid state and is unfair to Gaza and the Palestinians. Israel is going to lose the image and media war every time, and there is nothing we can do to change that.

With AIPAC, we are able to engage with the United State’s decision makers and take members of Congress to Israel where they get to meet with leaders of the Israeli and Palestinian government. Congress gets to see Israel, like we get to see Israel.

We need to accept the fact that anti-semitism is never going away. People are always going to hate the Jews.

If you want to protect Israel, and yourself, then you need to get involved with AIPAC. We are wasting our time being upset and doing nothing about it. We can’t sit on the sidelines anymore. I want to know that I did my part in making sure that our homeland is strong, safe, and secure.

I am committed to AIPAC. I stand with Israel. I love Israel.

This is my blue square.

About the Author
Brandon Wolfe lives in Austin, Texas, works in tech, and has a really cute dog.
Related Topics
Related Posts
Comments