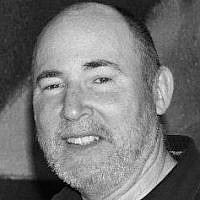 The Blogs
Aaron B. Cohen
Apply for a Blog
Advertisement
Please note that the posts on The Blogs are contributed by third parties. The opinions, facts and any media content in them are presented solely by the authors, and neither The Times of Israel nor its partners assume any responsibility for them. Please contact us in case of abuse. In case of abuse,
Report this post.

Three-thousand years of Jewish, Christian and Muslim heritage, history and faith are under assault at UNESCO, the United Nations world heritage organization.

For the second time in a month, predominantly Muslim nations have used their vote at the world body as a mandate to erase the connection of Jews and Christians to the Temple Mount — a connection that Islam, in its classic esteem for Judaism and Christianity, in the past recognized and honored.

This week’s resolution, passed by secret ballot, mentions only Islam’s connection to Judaism’s holiest site. Playing politics with the past, in this case as yet another in a steady stream of UN jabs against Israel, is a vile and pernicious–and ultimately lethal–game.

Why should we care? Isn’t the UNESCO vote simply another in a torrent of assaults on memory occurring around the world? Besides, isn’t the world body irrelevant, in an era when ISIS and the Taliban routinely destroy some of the world’s most precious antiquities, including, ironically, UNESCO World Heritage sites? (Remember the Buddhas of Bamiyan and the Greco-Roman city of Palmyra.)

Those who deny one’s story, as those who voted for these UNESCO resolutions have done, never stop there. Their inevitable next move is to eradicate evidence of that story. Indeed, the Jerusalem Islamic Waqf, the Muslim Trust that has continued to control the Temple Mount since 1967, periodically has used bulldozers, in contempt of archeological practice, in order to make “improvements” to the site, and to destroy evidence of the Jewish and Christian past.

The final step of those who would, in service of their own triumphalist ends, alter memory, faith, and historical fact, usually is to murder those who provide living proof of what the deniers deem inconvenient truths. Thus the slaughter of untold thousands of Christians across the Middle East and North Africa during the past decade.

Without a Jewish First and Second Temple in Jerusalem, what Jews for some 3,000 years have called in Hebrew Har Ha’Bayit, Mountain of the House [of the Lord], there could be no Christian Gospel. The erasure of the Jewish people’s Second Temple is an erasure of the very origins of Christianity. Neither could there be what Muslims call in Arabic Haram al Sharif, the Noble Sanctuary.

The mostly Muslim majority nations that voted for this latest UNESCO resolution, which was submitted by Lebanon and Tunisia on behalf of Jordan and the Palestinians, are waging war not only on history. They are pushing all Jews and Christians who value faith, identity, and, ultimately, their very lives, down a slippery slope that leads to the abyss.

As ISIS has demonstrated, nothing less than the preservation not just of holy sites and of peoples, but of our very civilization, hangs in the balance.