The Blogs
Daphne Lazar Price
Apply for a Blog
Please note that the posts on The Blogs are contributed by third parties. The opinions, facts and any media content in them are presented solely by the authors, and neither The Times of Israel nor its partners assume any responsibility for them. Please contact us in case of abuse. In case of abuse,
Report this post. 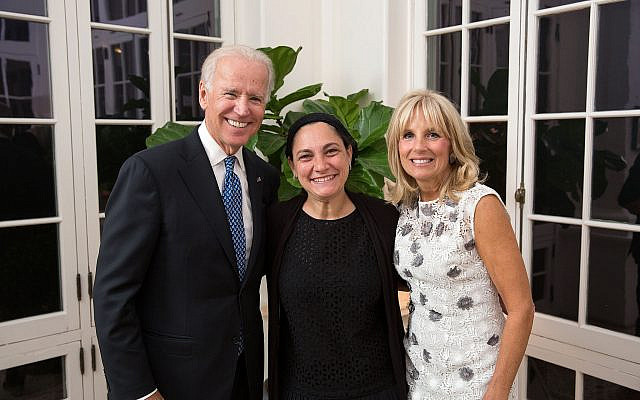 Daphne Lazar Price with the Bidens at the Vice Presidential residence

I took a break from my daily pandemic-induced regimen of watching The Vampire Diaries (don’t judge!) to watch (against my better judgement) your original series “My Unorthodox Life,” that reality/documentary series that follows Julia Haart and her family after they part ways with their Orthodox community of Monsey and reject their religious practice. I’m sure you thought that you were recreating some version of a Cinderella story, where instead of living to serve her evil step-mother and step-sisters, Julia opines in the first episode, “we only exist in relation to a man… In our community a woman basically has one purpose: to follow her husband and to be a baby-making machine.” She rejects her “fundamentalist” lifestyle, which she sees as rooted in misogyny and the exploitation of women’s bodies (my words), to dive head-first into the world of high-fashion, which, unless I’m missing something, is also rooted in misogyny and the exploitation of women’s bodies.

As the Executive Director of the Jewish Orthodox Feminist Alliance (JOFA), whose organizational mission it is to advocate for expanding women’s rights and opportunities within the framework of Jewish law to build a vibrant and equitable Orthodox community, my curiosity to watch this series was piqued. I confess, I quickly got sucked down the rabbit hole that landed me in a pit of voyeuristic muck. And, If I’m counting correctly, this is the second series you have aired about an Orthodox woman’s experience breaking away from her community. The other, Unorthodox, was loosely based on Deborah Feldman’s life story of rejecting her hasidic upbringing and rejecting Judaism altogether. I don’t know how you make your selections or why you insist on repeating this one theme of rejecting one’s own community rather than growing from within, but to paraphrase a past presidential candidate, there are BINDERS full of Orthodox women who are smart, driven, innovative, creative and athletic, who live their fullest selves and their best lives as practicing Orthodox Jews within their Orthodox community, and who can tell a compelling story without any kind of spin.

Did you know that there are  Orthodox women who are rabbis or who serve in other clergy roles? Meet Rabba Sara Hurwitz, the Co-Founder and President of Maharat, the first institution to ordain Orthodox women as clergy. Under her tutelage, 49 women have been ordained and dozens more are one their way to completing their studies. Rabbanit Shira Marili Mirvis is the first woman to be the sole spiritual leader of an Orthodox synagogue in Israel. And Rabba Dr. Lindsey Taylor-Guthartz just made headlines in the UK and around the world when she was unceremoniously dismissed from her position at a prestigious Jewish London school for being ordained, only to be quickly reinstated after relentless public outcry calling for justice.

Are you interested in Orthodox women who are leading the way in athletics and their love of sports? A year ago, Maryland resident 11 year old Adi Topolosky took the sports’ gear industry to task when she discovered that none of the area merchants carried Elena Delle Donne sneakers. (Delle Donne was a star player for the WNBA’s Washington Mystics team.) To add insult to injury, a store clerk mocked her and ridiculed women’s sports. Adi blogged about it for JOFA, which quickly caught national attention from athletes and sports’ gear manufacturing executives who sprung into action. Since then she has appeared on numerous broadcasts including Good Morning America and the Kelly Clarkson Show. Beatie Deutsch is the Israeli national champion marathon runner. She is always training for her next challenge while parenting her 5 children. She is also a powerful advocate who helps children and teens struggling with their mental health. You can read write-ups on Beatie in numerous outlets including Runner’s World magazine and find her image on Adidas billboards. And then there is Liba Yoffe of Phoenix, who is competing in American Ninja Warrior. In addition to demonstrating her incredible physical strength, she wants to show girls and women that devotion to religion and fitness can live harmoniously together.

How about Orthodox women in the entertainment industry? Paula Eiselt, Producer of 93Queen follows Ruchie Freier, the first female Hasidic judge and mother of six who is determined to break up the male dominated Jewish EMS service and creates Ezras Nashim, the first all-female ambulance corps in NYC. Or Leah Gottfried whose production of Soon By You, an award winning comedic web series about 6 Modern Orthodox Jews dating in New York city.

To be sure, living an Orthodox life comes with challenges, and there are some segments of the population whose communal norms limit a woman’s ability to reach her full potential. And though there may be hurdles to overcome and barriers to lift, Orthodox women do have access to personal and professional growth opportunities. They go to college and on to graduate school. They have careers. They drive. And yes, many women get married and go on to have children with the goal of passing a love of Judaism, tradition and practice and an appreciation for the communities that helped raise them on to the next generation.

Still need more examples? Check out the hashtags #thisorthodoxlife and #myorthodoxlife where numerous women have shared their professional and personal accomplishments in their own words. So next time you are scouting for subject matter for another movie or series, dig a little deeper. And don’t act surprised when you uncover Orthodox women’s diversity of skills, passions and talents — and who choose to demonstrate it all while living their best Orthodox lives.

P.S. I didn’t mention my own accomplishments and adventures, but if you’re wondering about the photo, I did attend the first-ever Sukkah party at a Vice President’s residence.

About the Author
Daphne Lazar Price is the Executive Director of the Jewish Orthodox Feminist Alliance (JOFA) and an adjunct professor of Jewish Law at Georgetown University Law Center. She is active in the Orthodox community in her hometown of Silver Spring, MD, where she lives with her husband and two children.
Related Topics
Related Posts
Comments
Advertisement