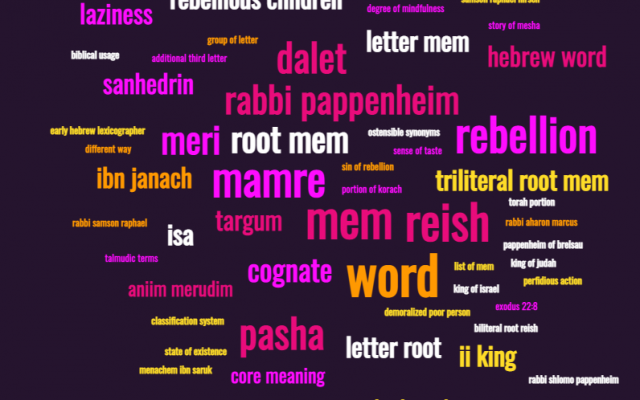 Rashi’s opening comment to the Torah portion of Korach (Num. 16:1) refers the reader to Midrash Tanchuma, which characterizes Korach’s perfidious actions as both a pasha and meridah. In this context, these two words mean “rebellion,” as Korach sought to rebel against Moses’ leadership and assert his own authority. In the end, Korach and his followers suffered an ignoble death, and the rebellion was swiftly quashed. The Talmud (Sanhedrin 49a) derives the rule that a mored b’malchut (“he who rebels against the kingship”) deserves death from a prophecy said to Joshua: “Any man who contravenes (yamreh) your [Joshua’s] mouth, and he does not listen to your words for anything that you will command him, he will be put to death…” (Joshua 1:18). For those keeping score at home, we’ve encountered three different Hebrew words for the verb of “rebelling”: poshea, mored, and mamre. In this essay we will shed light on these ostensible synonyms by delving into their core roots and trying to understand how they differ from one another.

The word pasha most famously appears in Scripture in the sense of “rebelling” when the Moabite king Mesha, who had hitherto been a vassal to the King of Israel, rebelled (vayifsha) against Jewish hegemony and asserted his own independence (II Kings 3:4-5). That war saw the kings of Judah, Israel, and Edom unite against the Moabites in a story told both in the Bible and the Mesha Stele. Midrash Tanchuma expounds on the verse “a brother rebelled (nifsha)…” (Prov. 18:19) as similarly referring to Korach rebelling against his “brother” (i.e., cousin) Moses. The Talmud (Yoma 36b) explains that pasha denotes a “sin of rebellion,” as opposed to chet and avon which refer to less overtly-rebellious sins. This understanding matches the Biblical usage of the term pasha as an expression of “rebelling.”

That said, Rabbi Shlomo Pappenheim of Brelsau (1740-1814) asserts that the primary meaning of pasha is not “rebellion.” Instead, he argues that the word pasha primarily refers to negligence that comes about through laziness. The literal poshea does not try to rebel or anger the one against whom he sins. Rather, the poshea is one whose indolence shows that he does not care about the repercussions of his actions. Indeed, elsewhere the term poshea refers to a watchman who did not live up to the vigilance expected of him (see Exodus 22:8 and Bava Kama 21b, 29a). He did not purposely try to undermine anybody’s property rights. He simply did not care enough to be careful in stopping certain damages from happening.

When it comes to approaching the honor of a king — and especially to the King of Kings — a higher degree of mindfulness is expected. Laziness and apathy are tantamount to rebellion simply because by not making sure to live up to one’s expectations, one actually slights the king’s honor. It is in this sense that pasha was borrowed to mean “rebellion.” In fact, in many cases, including the story of Mesha, Targum translates pasha as mored (see Targum to II Kings 8:22, Isa. 1:2, Jer. 33:8), which implies active defiance rather than just passive languor. [Targum also uses the Aramaicized form of the Hebrew meridah to render instances of the Hebrew meridah in Aramaic (see Gen. 14:4, II Kings 18:20, Isa. 36:5, Yechezkel 2:3).]

Ibn Janach and Radak trace the Hebrew word meridah to the triliteral root MEM-REISH-DALET, which they explain bears two different meanings: “rebellion” and “lowly/downtrodden.” For example, when Zedekiah rebelled against Nebuchadnezzar (II Chron. 36:13) and when the five kings rebelled against the four kings (Gen. 14:4), the Bible uses verb cognates of meridah to denote “rebellion.” But the Bible also uses the phrase aniim merudim (Isa. 58:7) to denote especially “downtrodden” paupers.

The two lexicographers in question do not offer a way of uniting these disparate meanings of the root MEM-REISH-DALET, but Rabbi Samson Raphael Hirsch (to Gen. 14:4) finds a way to do so. He explains that aniim merudim are considered so unfortunate and lowly that there is no friction or reprisal against those who abuse them. The way he puts it, there is no pushback (“rebellion”) against such abuses because the victim is anyways marginalized and considered too unimportant for mishandling him to elicit any response. Sadly enough, Zion was said to have reached such a sorry state of existence in the aftermath of the destruction of the First Temple (Lam. 1:7).

In his Machberet Menachem, Menachem Ibn Saruk has a different way of looking at things. Like Ibn Janach and Radak, Menachem classifies cognates of meridah as derivatives of the triliteral root MEM-REISH-DALET. However, unlike them, he classifies cognates of merudim as derivatives of the biliteral root REISH-DALET (“downward motion” / “descent”), in the sense that an especially oppressed and demoralized poor person has fallen so far down from the lofty place of a respected human being.

As is his way, Rabbi Pappenheim even traces the word meridah to the biliteral REISH-DALET, noting that the MEM is not essential to the root of the word. He explains that the verb rodeh (Gen. 1:28, Lev. 25:43) refers to “lording over others” in the Machiavellian way that rulers keep their subordinates/subjects “down,” such that they cannot assert their own independence. With this in mind, Rabbi Pappenheim explains that many three-letter roots that begin with the letter MEM actually derive from two-letter roots, with the letter MEM serving as a means of switching the meaning of the two-letter root to its exact opposite. In this case, he explains that the MEM that comes before the letters REISH-DALET in meridah yields the opposite of “lording over others” — i.e., “rebellion,” by which those others assert their control.

Our third synonym for “rebellion” is mamre. Moses calls the Jews mamrim in terms of their rebellious nature in refusing to heed G-d’s word (Deut. 9:7, 9:24, 31:27), and a renegade elder who refuses to heed the rulings of the Sanhedrin is termed by the Mishna a zaken mamre (Sanhedrin 11:2). In a similar manner, the Talmudic term for an apostate who “rebels” against G-d is mumar (Shabbat 69a, 87a, Eruvin 69a-b, Yevamot 47b, and more places). Finally, a rebellious child is called a ben sorer u’moreh (Deut. 21:18), wherein the word moreh is a cognate of the term mamre. In the case of the rebellious child, the Midrash (Sifrei to Ki Teizei 218) offers an exegesis tying the word moreh in the sense of “rebelling” to the word moreh in the sense of “teaching,” explaining that the rebellious child has “taught” himself a different path. But this exegesis does not tell us the etymological basis for the term mamre.

For that, we turn again to the early Hebrew lexicographers. Ibn Janach and Radak trace the various inflections of meri/mamre to the triliteral roots MEM-REISH-HEY and MEM-REISH-REISH, both of which can refer to “rebelling” or “changing [from what one was commanded to do].” Menachem, as we might expect, links all of these words to the biliteral MEM-REISH.

Rabbi Pappenheim goes into more detail about the root MEM-REISH, defined as “changing,” “switching,” or “getting rid of one thing so that something else can take its place.” He offers a list of Hebrew words related to this idea that are derived from this root, including: mohar (“bride price”), given in exchange for a woman’s maidenhood; maher (“quickly”, “fast”), constantly-changing movement; mar (“bitter”), a taste rejected by one’s taste buds who seek to replace it with something more palatable; morah (“razor”), the tool used for shaving one’s hair that paves the path for new hair to replace that which was cut; temurah (“switching”), the illegal act of trying to transfer holiness from one sacrificial animal to another; and amirah (“saying”), speech used for the exchange of ideas, especially as proper etiquette demands that the parties involved in a conversation “alternate” taking turns in speaking.

When it comes to meri/mamre, Rabbi Pappenheim explains that just as foodstuff described as mar can be said to be “revolting” to the palate, so do the words meri/mamre denote a reaction to something unpalatable. Anytime a person repudiates something that does not agree with his senses/sensibilities (not just his sense of taste), said person engages in an act of meri/mamre. He “rebels” against that thing and disagrees with it. This concept can be applied to political leadership as well, such that when one “rebels” against the established rulers, one “switches out” their word for somebody else’s word and “replaces” the established leader by deposing him and installing somebody else. 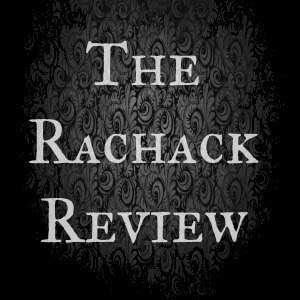 Keep up to date with Jewish Books at the Rachack Review…

Interestingly, Rabbi Aharon Marcus (1843-1916) blurs the distinction between meri/mamre and meridah/mored. He proposes that both of those expressions are rooted in the two-letter MEM-REISH, whose core meaning is reflected in the honorific Mar (“Mister”) — an expression of “dignity” and “sovereignty.” The way Rabbi Marcus seems to understand it, when one “rebels” against authority, one is poised to assert one’s own self-possession and dignity, reestablishing himself as an autonomous being. (Rabbi Pappenheim’s list of MEM-REISH derivatives cannot include meridah/mored, because his classification system only recognizes monoliteral/biliteral roots with the additional third letter from the group of letters HEY, ALEPH, MEM, NUN, TAV, YOD, or VAV. In this case, the third letter would be DALET, which does not fit Rabbi Pappenheim’s system.)