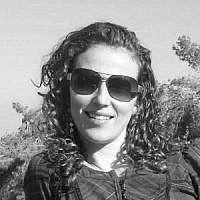 The Blogs
Lauren Ben Yaaqov
Apply for a Blog
Advertisement
Please note that the posts on The Blogs are contributed by third parties. The opinions, facts and any media content in them are presented solely by the authors, and neither The Times of Israel nor its partners assume any responsibility for them. Please contact us in case of abuse. In case of abuse,
Report this post.

“Extremism” is a word that has been thrown around by the media a lot lately.  It is defined as being “outside the mainstream” or “fanatical” when referring to politics or religion.  In light of recent events we are hearing this word preceded by “Islamic”, usually referring to groups like ISIS, Boko Haram, Al Qaeda, etc.  But it is important to point out that there are extremists in every religion.  Having lived in Israel for three years I was an eye witness to the distinction between the ultra-Orthodox and secular Jews.  The very religious devote their lives to prayer and study, have a particular code of dress, limit their exposure to technology and typically have very large families. They are not a part of the work force and they do not serve in the army.  The secular Jews on the other hand, comprise Israel and the Jewish People’s majority.  They are believers and preserve their cultural identity but without being bound by religious guidelines.

The fact that these two differing, sometimes clashing versions of the same ideology coexist in relative harmony all over the world is not an accident.  That us because the Jews, and the Hindus, Catholics, Buddhists alike believe that to follow one set of religious beliefs is not synonymous to hating and wanting to destroy another.  No matter how extreme the followers of these religions are they share one common value: human life.  They choose to embrace this world full of otherness, not to devote their lives to trying to eradicate it or worse yet, to die because of it.

It is this fundamental concept about “radical” Islam that I simply can not  come to terms with.  The fact that a group of people that believe themselves to be the most religious, most holy creatures on this earth can justify killing other human beings as an act of resistance or their religious duty is absolutely astounding.  The fact that two members of this group thought they would become closer to God, that they would make the ultimate “religious sacrifice” by brutally slaughtering four religious Jews in a HOUSE OF WORSHIP is beyond ironic. It simply defies humanity and logic in every way.

Then again why would we look for logic within this small group of Islamic extremists?  We, the modern world love to just chalk it up to an act committed by those same crazy barbarians who flew planes into the Twin Towers and kidnapped 200 Nigerian girls and cut a bunch of people’s heads off on YouTube.  They are the exception and not the rule; the minority and not the majority.  We take comfort in the fact that for the moment we are greater and more powerful than they are.  But can their level of extremism be measured by size?  Will our quantity of armies and level of military sophistication even intimidate their lust for killing and love of martyrdom?  If the answer is no (and it is) then it really shouldn’t matter if we are talking about Hamas throwing rockets into Israel or Iran building a nuclear bomb and threatening the West.  The underlying message from the extremists is the same: “we will sacrifice everything we have including our lives to destroy you because you chose not to live the way we live.”

How in the world can such ruthlessness and recklessness with human life be contended with?  Definitely not with a diplomatic handshake nor endless warfare.  The situation between Islamic extremists and the rest of the world goes back centuries and frankly could be too complex to ever be resolved.  However, it is likely to get a lot worse before it ever gets better because people are too blind/afraid/naive/politically correct or all of the above to see who these extremists are or even WHERE the are.  Sure the ones who like to plant bombs at marathons usually end up dead or in jail, but what about the ones yelling “Free free Palestine” and “Hitler was right” at universities across the United States? What about the lawful immigrants (!!!!) trying to impose Sharia Law zones in London? What about the ones who inhabit those neighborhoods in Paris where even the French police are afraid to go now?  Are they any less extreme because they haven’t blown themselves up in a mall yet?  The fundamental ideology is the same, they just haven’t crossed the line yet.  There are low profile extremists and their sympathizes lurking in very corner of the world.  On the internet recruiting more followers, raising money (and getting it!!!!) from governments and political organizations, preaching their hatred in schools to young minds…they are everywhere.  And they are no less extreme than those who commit terror.  What they all share in common is the fact that a perverted spin on a religion has stripped away any and all humanity they may have once had.

Yes there are religiously extreme participants in every faith, but I do not believe this means they are to be judged equally.  A Buddhist monk might meditate in the woods for a month (extreme) but he would not run over a three month old child with a car and call it a religious act (inhuman).  A Catholic priest may live his life in celibacy but he would not build a tunnel under a kindergarten with the intent to attack.  An Orthodox Jew might refuse to drive a car and wear heavy black clothing during the summer on a Saturday but he would not slit a mans throat in cold blood and call it a religious act.  There is absolutely no moral equivalency between Islamic extremism and other fanatical interpretations of religion and anyone who doesn’t see that is missing something in the core of their very being.

Before many of you decide to find this post very offensive and start to wax philosophic about the millions of moderate Muslims this world is just brimming with I will say that of course there are non-extremists who practice Islam and they are modern, civilized and good people.  They are the secular Muslims, if you will.  But it is inaccurate to use the word extremist when describing all religious fanatics.  No religion is perfect and within each one there are bad people but radical Islam transcends the  boundaries of evil.  It is my fading hope for mankind that one day these people can see the light of good and stop bringing destruction to this world. Then there will be something to throw candy in the streets for.

About the Author
Lauren is a passionate thinker and blogger. She lived in Israel for three years and currently resides in Tampa, FL. She discusses her experiences in Israel as well as current global issues in her blog "twirlinginthesun"
Related Topics
Related Posts
Comments