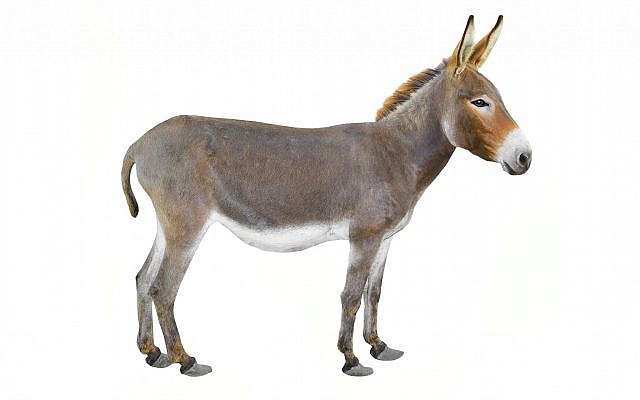 And Abraham rose early in the morning, and saddled his ass. (Geneses 22:3)

And Moses took his wife and his sons, and set them upon the ass, and he returned to the land of Egypt. (Exodus 4:20)

Behold, thy king cometh unto thee, he is triumphant, and victorious, lowly, and riding upon an ass. (Zechariah 9:9)

The Torah tells us of a famous donkey riding through biblical history—Abraham used it; Moses used it; Mashiach will use it in the future.[1] In Hebrew, an “ass” or a “donkey” is chamor. In the verse in Exodus, Moses set his wife and children on the donkey—ha-chamor. The donkey means a known donkey. How is it known? Rashi states, based on the midrash Pirke d’Rabbi Eliezer, that this is the same donkey that Abraham saddled with wood on the way to the Akeida (Binding of Isaac), and this is the same donkey that Mashiach (the Messiah) will ride, as the prophet Zachariah tells us—Mashiach is a pauper riding on a donkey. Of course, this cannot be understood literally. Generally, Midrash[2] is not meant to be understood literally. Apparently, Rabbi Eliezer and Rashi are hinting to us that all three stories are thematically connected—it’s not the same donkey literally, but the same donkey conceptually—i.e., it’s the same idea.

According to the Baal Shem Tov, the word chamor, signifying a donkey, is cognate with chomer, which means “matter” or “energy.”[3] Indeed, the word chamor literally means “substance,” or “matter.”[4] Let us pay close attention to how this word is used grammatically in the three verses quoted in the epigraph. In Genesis, Abraham saddles his donkey. In Exodus, Moses places his wife and children on the donkey. In Zechariah, Mashiach will ride on a donkey.[5] What is the significance of the changing grammatical form—his donkey, the donkey, and a donkey?

The mission given to humanity is to elevate and sublimate the material to the level of spiritual. That is done by revealing the hidden spirituality permeating the material world. As mentioned above, chamor means “matter,” “energy,” or “material.”

Abraham was the first to start the process of sublimation of material. He managed to elevate his chamor—his own physical body. He did it by circumcising himself, thereby sanctifying his body. That is why Abraham is called a merkavah—a chariot of God.

Moses took it a step further. As the Lawgiver, he showed us how to use the material in the service of the spiritual. He taught us mitzvot—divine commandments, most of which utilize physical objects. When we take a hide of a kosher animal, such as a cow, and we write the Torah scroll on it, turn a coarse physical object into an object of utmost holiness—a Sefer Torah. The same with tefillin (“phylactery”) and mezuzah. However, the commandments are numbered and carefully delineated. Not everything could be elevated. These are known objects of physicality that could be elevated to a spiritual level by utilizing these objects for mitzvot. Thus, these known objects are symbolized by the donkey (ha-chamor).

Mashiach, on the other hand, will ride on a donkey. The indefinite article (or rather the lack of the definite article) indicates “any” or “all.” Thus, chamor (“a donkey”) means any matter or all matter. Mashiach will elevate all matter. He will reveal the hidden spiritually in every material object in all of creation. How can he do that? After all, not every atom of matter in the universe can be used for the performance of mitzvot! Instead, Mashiach will accomplish this by showing how matter is made of spiritual stuff—that in essence, the spiritual and material are one and the same. This program was first formulated by American physicist John Archibald Wheeler, who called it “It from Bit.” (See my earlier essay, “Noah’s Ark—Three Layers of Reality.”) Indeed, the information “bit” is the lowest form of spiritual (that is, non-physical) stuff. When theoretical physicists realize this program and show how all matter, “it,” comes from information, “bit,” Mashiach will have “ridden on a donkey”—the physical coarseness of this world will have been harnessed and sublimated.

Indeed, the Zohar explains that a donkey is “bad on the outside and good on the inside.”[6] The symbolism of this statement becomes apparent from the above. Matter appears coarse and tangible only on the outside; “inside,” it is the spiritual core that is pure and holy. This is the spiritual essence of the Messianic redemption: it is the redemption of truth—the truth about the superiority of spirit over matter—held captive by the big lie of materialism (chumriyut).

[1] “This donkey was born to the famous donkey formed on the first Friday of creation, after sunset. It is the donkey on which Moshe rode when coming to Egypt. And it is the donkey which the son of David will ride upon,” Pirke D’Rabbi Eliezer, chapter 31.

[2] Midrash (pl. midrashim) is a collection of early Rabbinic writing with homiletic commentary on Tanach (the Hebrew Bible). A homily is called in Hebrew drush, from which the word midrash is derived, meaning homiletic interpretation.

[4] As in tzur ve-chomer, meaning “form and substance (or matter).”

Originally published on QuantumTorah.com on 10/19/2021