First we had Simon Johnson of the JLC badmouthing the CAA Survey.

Then we had the CST’s Antisemitic Discourse Report which (page 13) states ‘Not all anti-Zionists are antisemites and anti-Zionism is not necessarily antisemitic’.  The only time anti-Zionism is NOT anti-semitic is when it’s voiced by someone who does not believe in the nation state, period. I have never met such a person.

Own goal #3 was scored yesterday by the Institute for Jewish Policy Research (JPR). It published a survey of anti-semitic attitudes. The Survey makes the cardinal error of separating what it calls ‘anti-semitic’ attitudes from ‘anti-Israel’ attitudes – which however we (and the IHRA Definition) would categorise as anti-semitic, not merely ‘anti-Israel’. Here they are:

Israel is committing mass murder in Palestine’;
‘Israel is deliberately trying to wipe out the Palestinian population’;
‘Israel is an apartheid state’;
‘The interests of Israelis are at odds with the interests of the rest of the world’;
‘Israel has too much control over global affairs’;
‘Israel exploits Holocaust victimhood for its own purposes’;
‘Israel is the cause of all the troubles in the Middle East’;
‘People should boycott Israeli goods and products’
.

This leads to a calamitous Own Goal in the paper. We are told (p46) that ‘Thus, the very left-wing are, on the whole, no more antisemitic than the general population, but neither are they less antisemitic.’

However when it comes to the ‘anti-Israel’ attitudes (which are in fact anti-semitic attitudes) the ‘very left wing’ scores way higher than other political categories, see these charts taken from the paper (page 45). 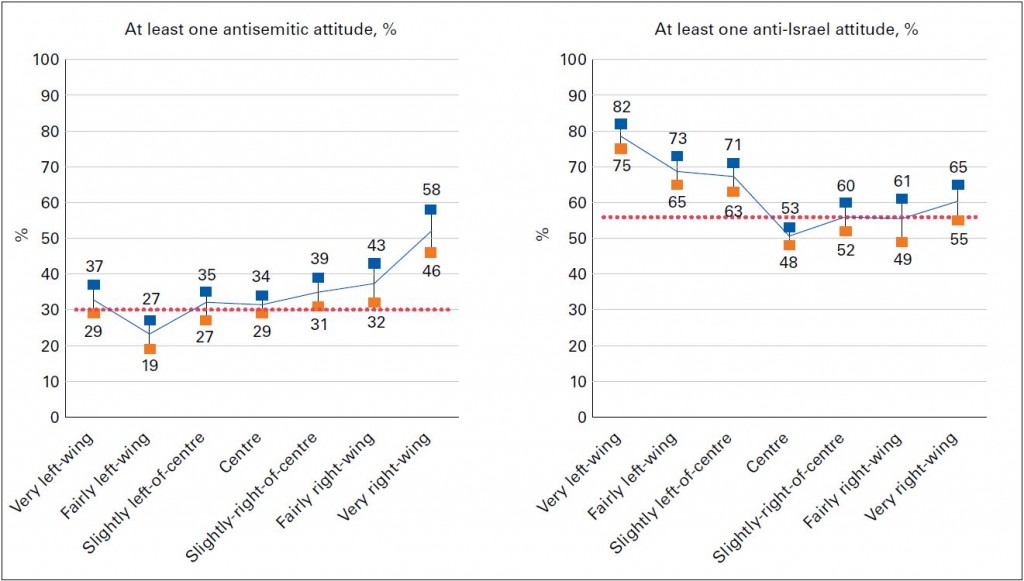 The Survey suggests (left chart) that a range of 29-37% of the far Left hold at least one anti-semitic attitude BUT the range holding at least one ‘anti-Israel’ attitude (which we and the IHRA Definition would deem anti-semitic) is 75-82% (right chart), much higher than other political groupings! (The range denotes the 95% confidence interval for inferring population proportions from the sample).

The Corbynites of course will seize on the statement ‘the very left-wing are, on the whole, no more antisemitic than the general population’.

They must be challenged.

Note: I inadvertently wrote here that the Pears Institute is a major funder of JPR. This was incorrect and has been corrected to the Pears Foundation. The inference which some drew in the original text, that I was suggesting that the director of the Institute was using the power of funding to influence JPR’s research, was obviously not intended and I apologise for any misunderstanding.
About the Author
Jonathan Hoffman is a blogger who has written for United With Israel, CiFWatch (now UK Media Watch), Harrys Place and Z-Word.
Related Topics
Related Posts
Jonathan Hoffman
Comments