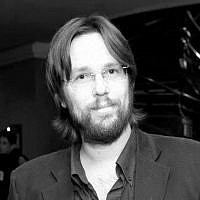 The Blogs
Joshua Kullock
Apply for a Blog
Advertisement
Please note that the posts on The Blogs are contributed by third parties. The opinions, facts and any media content in them are presented solely by the authors, and neither The Times of Israel nor its partners assume any responsibility for them. Please contact us in case of abuse. In case of abuse,
Report this post.

Two weeks ago, right before the beginning of Rosh haShana, I got a package from Amazon with a couple of books that I recently ordered. One was a thick, dense book that goes by the title of “Handbook of Denominations in the United States (13th edition!).” In its more than 400 pages, the book tries to cover every single religious denomination in this country that falls under the category of “Abrahamic traditions.” So, without counting anything from the Far East, this “handbook” presents around 250 different denominations. Coming from Latin America, where you mainly have Catholics, Evangelicals, Muslims and Jews, it’s pretty easy for me to get lost in the subtleties between Primitive Baptists, Progressive National Baptists, and Progressive Primitive Baptists. Not to mention the Old Missionary Baptists, the Original Free Will Baptists and the Old Regular Baptists among many other types of Baptists. It will take me forever to learn anything about all these groups. Oy vey…

At the other end of the spectrum I received Sam Harris’ latest book, “Waking up.” As you may know, Sam Harris is a member of a select group of scholars whose main goal is to discredit religion, fighting against what they describe as the biggest evil of all times.

The reason I bought Sam Harris’ book is because I think he and his friends are (at least) partially right. There are plenty of things with which religions should be uncomfortable. There are plenty of good reasons why people leave congregational life and don’t feel any connection with institutionalized religion. And Harris, Dawkins and Hitchens (to name a few) are actually good at pinpointing some of those reasons.

So, for example, we have the dogmatic creed which many religions present to sustain their core system of values. Without being judgmental, I can certainly understand why some people are unengaged with institutions that will deny the findings of science or will advocate for claims that are not beyond reason but against reason.

I guess that the writers of the House M.D. show were thinking about those kind of dogmas when they wrote the line that reads: “Rational arguments don’t usually work on religious people. Otherwise, there wouldn’t be religious people.”

Another reason to be estranged from religious life could be related to the image of a G-d that resembles, like my dear friend and colleague Rabbi Brad Artson says, “a bully in the sky,” a grumpy old guy whose primary mission is to punish or to reward our behavior here on Earth. In our days, more and more people have problems connecting with this type of G-d, praying to this type of G-d, or loving this type of G-d. Well into the 21st century, we certainly can’t afford dealing with the violence that is distilled from some of these theological claims.

If religious propositions are all about the one and only Truth (with capital T), and my dogmas can’t be squared with your dogmas, then we will have to fight each other until the end of the days, we will have to fight each other until we find the one and only true winner and, consequently, G-d’s chosen people. Much of the violence we see around us today and much of the violence we experienced throughout history, is related to religious wars, and to the ongoing will of fundamentalists of many kinds to teach the infidels the hard way. If that’s the case, then what’s the upside of a religious life? What are the real benefits that religions can bring to the world?

And that’s the reason for my biggest reproach to Sam Harris and his atheist crew: I really dislike their blunt oversimplification, their belief that every religion is evil, irrational and dumb, that everything must be black or white, with no nuances or subtleties of any kind. By doing that, I think they become pretty ridiculous themselves. Because, for me, that generalization doesn’t apply to Judaism. Or, if you prefer, that generalization doesn’t apply to every kind of Judaism available for us today.

Today, plenty of Jewish synagogues and congregations around the globe are not about dogma nor fanaticism, and not about the blind obedience to a rule of law. They are not about a diluted version of Judaism neither, nor about cultivating a commitment based on fear or guilt. Those synagogues, independent minyianim and congregations are about something else. Those synagogues are trying to foster what I will call “an awakened Jewish mind” for our times.

I would like to share with you three insights that I think are needed to develop an awakened Jewish mind for our times, three core values that we need to embrace on a daily basis, insights that will hopefully uphold Judaism as a force for goodness and kindness in this world.

For me, the first value of an awakened Jewish mind is the value of Akarat haTov, the value of recognizing the good people and good things surrounding us. Instead of falling into the trap of always looking for the weakest link, an awakened Jewish mind should always look for the bright spots, for all the good things that are constantly being done, and we should try to replicate that mindset in other contexts as well. We should pity those people who are always pointing to what is missing, all those people who are mad for what is always lacking or wrong, because, as Ralph Waldo Emerson said 150 years ago, “for every minute you remain angry you give up sixty seconds of peace of mind.” Akarat haTov should be an exercise in thankfulness and appreciation, an exercise that should inspire us to see what can we do for the common good, and how we can add our voices to make things work even better.

The second value of an awakened Jewish mind is the value of VeEie Nachon, the value of being ready and truly present for those needing us. As part of my rabbinical calling, I’m a privileged witness of the power of being present. I’m very much aware that it’s not so much about what you say or how you say it, but it is more about your willingness to be there for someone else. For me, there’s no doubt about the deep wisdom expressed in Woody Allen’s phrase: “80% of life is showing up.”

The value of VeEie Nachon, the value of being truly present, is not only for rabbis but for everyone. The democratic aspect of Judaism requires ten adults to get a minyian and all of us to stand with Israel against those who seek its destruction. The democratic and inclusive aspect of Judaism invites us, all of us, to stand firmly with those causes that make this a better world.

The last value of an awakened Jewish mind that I want to mention is the value of Talmud Torah, the value of serious learning of our texts and traditions. Because, if we don’t want a dull Judaism, and if we can’t afford to check our brains at the door every time we set foot in the synagogue, then we need to commit ourselves to serious learning. And, while doing that, we need to try our best to push the boundaries, to challenge our minds and to set the framework that will help us to reconnect with the Jewish wisdom that is waiting to be regained as our own. An awakened Jewish mind doesn’t take things for granted, and is always looking for opportunities to keep learning, to keep challenging, and to keep being nurtured by the beauty of our tradition.

At the beginning of this new year, I pray so we may all awaken our Jewish minds and souls to a life filled with Akarat haTov, with the capacity of VeEiu Nechonim and with plenty of Talmud Torah. May G-d grant us the ability to recognize the good that surrounds us, the gift of being fully present for those who are calling us, and the skill to keep learning from the wisdom of our Torah. Those are the basic tenants of a Judaism which has much to offer to the world, and is waiting for us to be the ambassadors of such a transcendent message.

About the Author
Joshua Kullock is the rabbi at West End Synagogue, the only Conservative synagogue in Nashville, Tennessee. Born and raised in Buenos Aires, Argentina, he moved to the US in September 2013.
Related Topics
Related Posts
Comments