Many readers have asked me to share my original story, Through Fire and Water. A tale of Torah, Kabbalah, and the Power of Love. 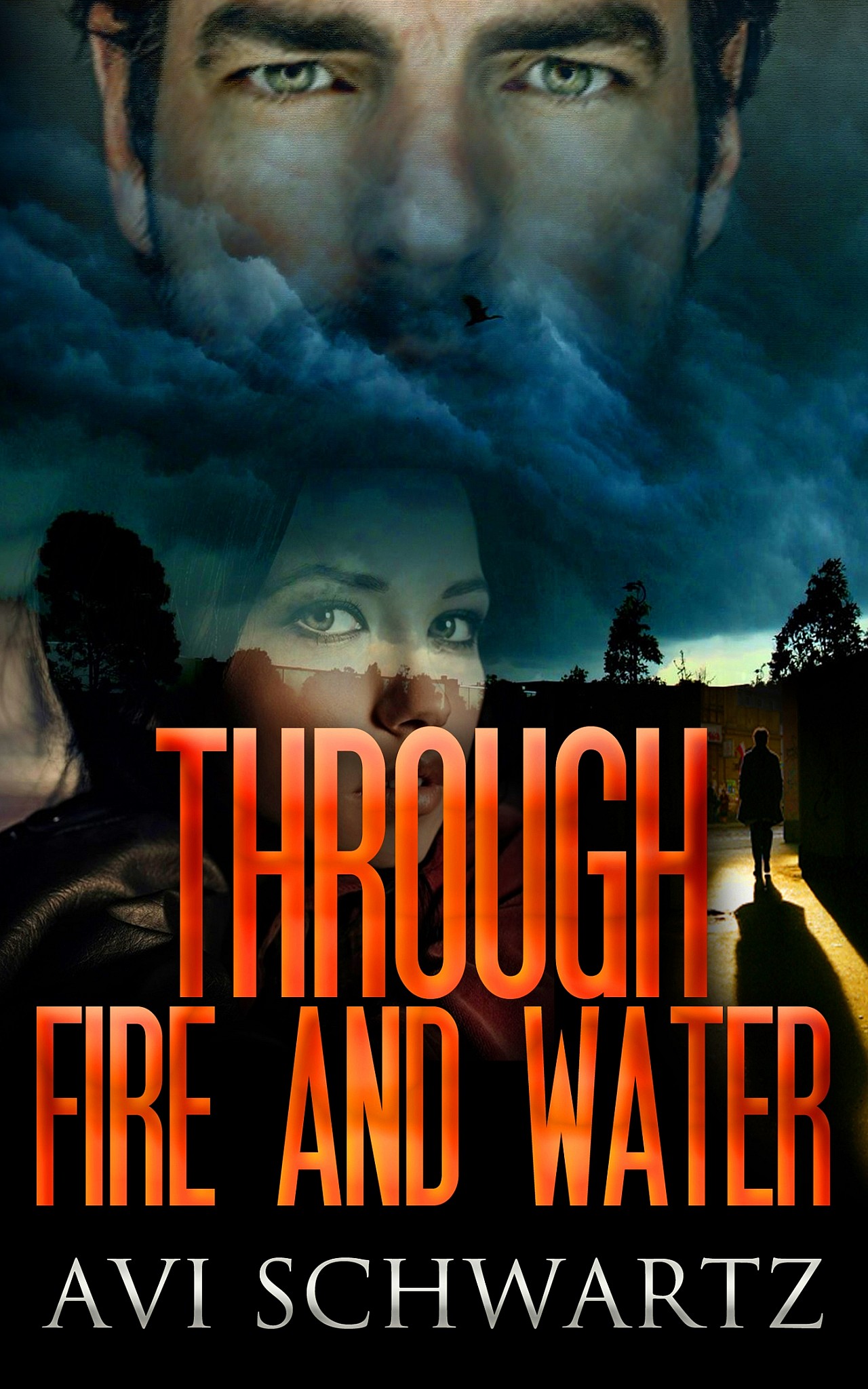 THROUGH FIRE AND WATER

Night had ended as the sun was appearing over the Manhattan skyline and still Michael Winston was no closer to saving his kidnapped father, Jake. Jake was an old, frail, and decorated World War II war hero, whose fate now lay in his son’s hands. Only five days remained until the month long deadline. Throughout the harrowing night, he was manipulated into running fifty blocks, desperately racing from ringing pay phone to pay phone, answering the calls on time, fulfilling the sadistic demands of Simon, the ringmaster of the whole operation. Simon taunted and played with him like a mouse caught in a trap. With his lungs burning from exhaustion, he managed to answer another one.

“How many times do I have to tell you? This is not a game”, said Simon.

“What do you think I am doing? Fooling around? I am doing my best”,

“Your best”, retorted Simon. “Tell that to your father when we send him to hell.”

Simon hung up, leaving Michael with only the dial tone.

From the side of his eye he noticed a homeless man walking up the sidewalk, pushing a shopping cart. “Sid. Sid.”, shouted Michael.

“Who wants to know?”

“Mikey? What happened to you?”

“They got my father! They’re going to take him down.” Off in the distance another pay phone was ringing. “You got to help me, Sid. You got to.”

Michael reached into his right hand jacket pocket, removed a digital recorder, and handed it over to him.

Another pay phone rang, chiming in harmony with the first phone. “It’s all here. I got to go.”

Sounds of ferocious thunder, heavy rain, blustering wind, and Michael wailing were heard. It was the night that his father died, twenty- five days earlier.

Several hours had passed since Jake had passed on. The grief was infusing itself into Michael. A failed but brilliant man, Michael had been living on the streets for the last fifteen years. Homeless, his only companion was his shopping cart, “Marty”. Overwhelmed with loss, pangs of guilt and self-loathing he raced through Central Park numb to the wild and dark storm. One could barely see him.

Lightning struck the cart, revealing a half crazed man, with disheveled hair, a long unkempt beard, and a digital recorder tied to a strap hanging around his neck. The fifteen years had taken their toll on Michael.

The lightning bolt overturned the cart, spilling its contents to the ground. In the center of the mess laid a framed photograph of a younger Michael, in a college cap and gown, arm in arm with his father, a gentle but powerful man.

Estranged from his father, Michael had never stopped thinking about him and how he let him down. The photograph was the only item left that reminded him of his glory days and the future that he had hoped to achieve but was now lost, since his father would never see his son succeed.

As if his life force was in the balance, he quickly picked up the photo and kissed it. “Oh Pops. Pops.”

The ground began to shake wildly. An immense and menacing shadow quickly approached as the ground split. Michael hastily returned the contents into the shopping cart and began running for his life. A towering wall shot out from underneath, followed by three more, trapping him. A beam of light descended and whisked him upwards and through a tunnel that seemed to traverse billions of light years and worlds away, bringing him into a dark oval room.

Standing in the center of the room, he began pacing back and forth, trying to overcome his fear as he calmed himself down by talking into his recorder.

A very bright spotlight shined into his face.

Behind the spotlight, an unseen mysterious figure had commenced to speak. It was Simon.

“Silence. Michael Winston. Silence. We have your father”, said Simon.

“Maybe in your world. But this is the Hereafter. Look.”

Appearing on the wall was a myriad of downcast human beings, in black outfits, marching in uniform lines toward a horrible inferno.

Among them was Jake.

Running towards the image he was hurled back by a force field sending him across the room.

The room’s door opened. Standing in the doorway, with a whip in hand, cracking it against the floor, was the tall and looming figure of Mr. Benjamin. Supposedly he was Jake Winston’s defending angel.

“Scared, Michael? Terrified? I don’t know whose more a coward, you or your pathetic father?” said Mr. Benjamin.

“No one calls my father a coward. No one.”

Uncontrollable with anger and impervious to the lashes, he charged Mr. Benjamin.

Immediately the guards rushed into the room, restraining Michael. “Sit him down.”

“Listen carefully to me, Mr. Winston. Your father is here because he deserves to be.”

Then Mr. Joseph entered, holding the folder of Michael’s father’s life. Encircling Michael like a cat after its prey, he flipped through the folder.

”I wouldn’t be upset Mr. Benjamin if I were you”, remarked Mr. Joseph. “He may be an angel but he’s no sweetheart. Play along. Tell him he’s right…that your father is a coward. It will make him feel better.”

“No. But you are.” snarled Mr. Benjamin.

“This isn’t real. Guilt. Guilt.” Michael told himself. “I am having a guilt attack. I should have visited Pops.”

Fifteen years of guilt had come crashing down on Michael. He knew that this time he had crossed the line by not visiting Pops one last time as he was dying in the hospital. He truly was a failure as a son and as a man.

“I’m afraid this is no illusion, Mr. Winston”, said Mr. Benjamin, imitating Rod Serling. “Welcome to the Corridor of Judgment.”

Overwhelming fear gripped Michael as the Twilight Zone theme played in the background. His breathing became heavy, his heart beat wildly fast, and his head was pounding.

“Thank you, Mr. Benjamin.” quipped Mr. Joseph. “Well, Mr. Winston. This is the point of no return. And within another few moments your father’s fate will arrive at that point.”

Nearly beside himself, swaying back and forth, Michael was near a nervous breakdown. “This is not going to work. He’s insane. The panel is not going to go for this”, said Mr. Benjamin.

Mr. Joseph pleaded frantically with Michael. “What’s it going to be? Heaven or Hell?”

Confounded by this surreal moment Michael was mumbling, “Heaven or Hell. Heaven or Hell.” Alarms then sounded off as a monstrous bright warning light came on.

Immediately the alarms stopped. “Do what?” asked Michael.

Mr. Benjamin removed a stopwatch from within his jacket and handed it over. Quickly Mr. Joseph placed it on Michael’s wrist.

“Time is of the essence, Mr. Winston”, said Mr. Joseph. “Do you understand?”

“Essence, to what? Time is of the essence? To what?”

Upset with Michael’s lack of understanding, Mr. Benjamin grabbed him by the lapel of his jacket.

“Listen.” said Mr. Benjamin. “You good for nothing bum, you see this stopwatch? You have thirty days to save your father’s life. No more. No less. You see. It is set to zero days. Zero hours. Zero seconds.”

Mr. Benjamin then activated it. “It has officially begun.” forcefully remarked Mr. Benjamin.

Now there was no going back. Everything now lay in Michael’s hands.

Suddenly the alarm system sounded off as Mr. Reuben, a somewhat elderly angel, known as the Prosecutor, entered the room.

“Mr. Winston is a mentally ill man. There is no way he has the wherewithal to withstand the test”, answered Mr. Reuben.

Seeing there was no choice, Mr. Joseph signaled Mr. Benjamin with his eyes, hinting to charge Mr. Reuben. Quickly they lunged forward and began choking him.

The guards immediately encircled both of them drawing their weapons.

“Everybody stand back”, yelled Mr. Joseph.

Turning to Michael, Mr. Benjamin commanded him. “Mr. Winston. Get ready to beam down.”

“You see my point.” Mr. Reuben said gasping for air. “The poor man already forgot about his father. How do you expect him to save him?”

Two unseen guards, standing in the rear of Mr. Reuben, lunged forward and overpowered both Mr. Joseph and Mr. Benjamin.

“My father…that’s right…My father. I got to save Pops”, remembered Michael.

“Tap the watch!” shouted Mr. Joseph. Tapping it, nothing happened.

“Tap it harder…Hit the watch! Just hit it!”

Michael did and the same tunnel of light that brought Mike to Heaven reappeared.

“Mike,” commanded Mr. Joseph. “Jump into the light! Jump!” Michael jumped into it and within moments he was back in Central Park standing in the raging storm. “I got to save Pops! How?” railed Michael. “You didn’t tell me, how!”

Chapter 2 – Stay Tuned For The Next  Installment