Always around the holiday of Shavuot (aka Feast of Weeks), we Jews discuss the concept of Tikkun Olam (lit. “correction of the world”). The prevailing understanding of Tikkun Olam is that the term speaks of the obligation of Jews to pursue social justice, lead an ethical life, and support equal rights to the underprivileged and minorities. These are all worthy goals, and the right for equality is a given for every human being. Nevertheless, placing the correction of the world on these values guarantees that the world will never be corrected, and below I will explain why.

At the foot of Mt. Sinai, when the Jews received the Torah—the code of law by which they lived—they received it only because they had met the precondition to be, even if only for that movement, “as one man with one heart.” That is, for one moment, they were in such absolute love for one another that they became as one person. Subsequently, they received their code of law which was meant to help them maintain that state of mutual love. This is why Rabbi Akiva, whose disciples gave us the texts that form the basis of our nation, taught that the overall rule of the Torah is that one sentence, “Love your neighbor as yourself.”

Immediately after Israel received the Torah, they were tasked with passing on what they had achieved. In other words, they became a nation in order to be “a light unto nations,” spreading unity and mutual love to the rest of the nations.

But two thousand years ago, we fell into such depths of mutual hatred that we did not even need a reason to hate one another. This unfounded hatred brought upon us not only the destruction of the Temple and the loss of sovereignty, but also the permanent loathing and contempt of the nations. That loathing, whose root is our unfounded loathing for our brothers, brought upon us countless cataclysms since then, the most catastrophic of which is, of course, the Holocaust.

Nevertheless, we do not learn. We do everything to avoid loving one another, and turn instead to surrogates such as social justice and morals. Yet, as we can see, there is no social justice and there is no moral anywhere. Values can’t replace mutual love, which is what the nations truly want from us: to shine for them the light of unity.

A mother does not need moral codes when she tends to her baby. Her love directs her and she always works with her child’s best interest in mind. Where you find laws, you won’t find love.

And as if we haven’t suffered enough, we still don’t want to love each other. We gladly bond with other faiths and practices, but when it comes to loving people of our own nation, we do not even speak of social justice, let alone love.

In relating so disparagingly toward our coreligionists, we shun the concept of being a light unto nations. We were, are, and always will be at the center of the world’s attention. Subconsciously, people are and always will expect us to project the light of brotherly love to the nations. But what we project is mutual derision and hate. When that is the case, no nation will love us, however hard we try to win its favor. Until we do our duty and cultivate love among ourselves, we will not fulfill the task for which we were given nationhood on the first Shavuot, at the foot of Mt. Sinai. And therefore, the nations will not love us.

So this year, I propose that we focus less on being morally just and ethical, and more, much more, on loving one another. Let’s dare, for once, to rise above our differences, avoid judging and patronizing, condemning and ridiculing. Instead, let’s stay who we are and unite above it. Let’s at least think about it. After all, Rabbi Akiva did not leave us a legacy of ethics, but a legacy of love, so let’s try to do what this teacher of our nation taught, and see what happens. 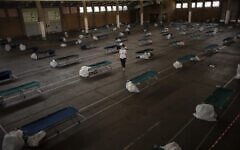