Newly appointed Secretary of State, Rex Tillerson, might find that his optimism will contribute to the evasiveness of achieving long-lasting peace between Israel and the Palestinians. Almost a week ago, Tillerson appeared in front of a Senate panel to discuss exchanged propositions he experienced in his meeting with Mahmoud Abbas. The Secretary stated as follows:

“They have changed that policy and their intent is to cease the payments to the families of those who have committed murder or violence”. We have been very clear to them that this is simply not acceptable to us. It is certainly not acceptable to the American people.”

What this administration fails to understand yet, is that the Palestinian leadership cannot renounce the encouragement of terror. It is the foundation of its society, and the rewards it has received from the international community, have demonstrated that their use of terror as a strategy has been highly effective in achieving political gains.

The hijacking of airplanes, the slaughtering of Olympic athletes at Munich, the murder of Israeli children throughout intifadas, and the many other terrorist atrocities perpetrated by Palestinian terrorists have elevated their cause above all other causes in the human rights community. Although the Palestinians have not yet achieved the establishment of a sovereign nation, because they twice rejected generous offers of statehood, their cause still dominates the United Nations and numerous non-government organizations. Since the surge of peoplehood by the Palestinians in 1964, violence has predominated strategies to gain international recognition through the tactical use of “victimization”. Whether attempting to portray the conflict as a struggle against apartheid, occupation, or human rights violations, violence has been a formal part of Palestinian policy and not one which could be erased so easily.

Using terrorism, as political leverage has served the Palestinian leadership well. Whether it was the signing of the Oslo Accords in 1993 or the Gaza Disengagement in 2005, the international community and the Israeli government have often rewarded terrorist strategies. To maintain the ability to encourage and carry out attacks, the PA must persist in its funding to terrorist families. Secretary of State Tillerson must not be so quick to believe that such incitement will stop, it is one of the major unifying factors of Palestinian society. Until international attention can be deflected away from the idea that settlements are a true obstacle to peace and focused on reducing the encouragement of terror by the Palestinian Authority, false promises will continue to roam freely.

The international community and this new American administration must acknowledge the degree of recognition given to these terrorist policies since 1964. Only after having assumed responsibility and ending the institutional bias against Israel, effectiveness will find its way in peace talks between the Israeli government and the Palestinians. This American administration may be enjoying a window of opportunity which has not been opened for a while in the Middle East. With the Qatari diplomatic crisis enveloping among the Gulf states, there is a  prospect to use the cutting of foreign aid to pressure the Palestinian Authority and reduce its encouragement of terror. 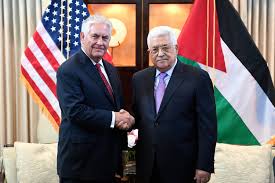 “The First Handshake”
Secretary of State Tillerson with PA leader Mahmoud Abbas
About the Author
Jonathan Michanie was born in 1993 Buenos Aires, Argentina. He lived in Miami, Florida where her completed his undergraduate degree from Florida International University in Political Science, with a focus in Middle Eastern Affairs. Former combat paratrooper in the IDF and holds an MA in Diplomacy and International Security from IDC Hertzeliya.
Related Topics
Related Posts
Comments