The Blogs
Menachem Creditor
Apply for a Blog
Advertisement
Please note that the posts on The Blogs are contributed by third parties. The opinions, facts and any media content in them are presented solely by the authors, and neither The Times of Israel nor its partners assume any responsibility for them. Please contact us in case of abuse. In case of abuse,
Report this post. 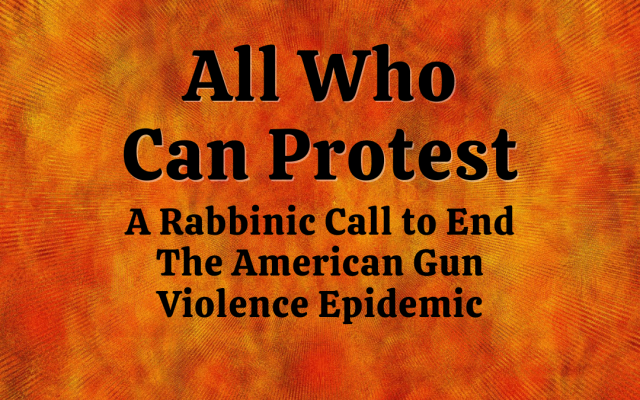 I once asked my friend and mentor Ruth Messenger how she maintains hope in her lifelong fight for social justice. She shared with me, in so few words, a message I continue to appreciate in my own humble work:

As we face the vast, inhuman, and avoidable carnage of American Gun Violence, in whose path tens of thousands of people die in the United States every year, we would do well to remember the many generations of good people Ruth invoked. Without them, the often frustrating and frequently sad work of combating the American Gun Violence Epidemic would be so, so much lonelier.

And, if we feel measurable success is a necessary requirement for continuing the pursuit of justice, if we premise upon achievable goals our commitment to save children’s lives from the ongoing trauma of school active shooter drills and their unfathomable world of bulletproof backpacks, I offer another teaching by my teacher Ruth:

“What makes relief work so heroic is that we do not delude ourselves into believing that our work will fully answer the need. And we get started.”

Perhaps Ruth was offering her own twist on the oft-cited words of the ancient sage Rabbi Tarfon:

“It is not your job to complete the work. But neither are you free from engaging in it.” (Pirkei Avot 2:16)

So we engage. Again. With All Who Can Protest: A Rabbinic Call to End American Gun Violence, published just this week by Rabbis Agains Gun Violence (RAGV). Another Rabbi’s Against Gun Violence anthology? What do we imagine a fourth written compilation of Jewish teachers might accomplish in the face of the American political stranglehold fueled by the National Rifle Association and our own complicity? (Rabbis Against Gun Violence published Peace in Our Cities (2013) in response to the Sandy Hook school shooting in Newtown, Connecticut. A subsequent volume, Not by Might (2016) was created in response to the shooting massacre at the Pulse nightclub in Orlando, Florida. Holding Fast (2018) was published in the aftermath of the antisemitic shooting massacre at Tree of Life Synagogue in Pittsburgh, Pennsylvania.)

What good do we believe we can do during a moment in which many believe real legislative change will not happen? Aren’t we just “tilting at windmills,” a fascinating phrase whose origin is the masterful 1605 novel Don Quixote by Miguel de Cervantes Saavedra.

Cervantes’ hero stands before windmills but sees giants, tilts his lance, and begins his battle. The imposing structural threats he experiences do not deter him. Of course, had the windmills actually been giants, Quixote’s effort would have been noble but futile. But sometimes we see giants where there are none and do not engage. Perhaps, in this fight to end American Gun Violence we are facing structural, societal threats that can be changed if we would but tilt our heads and commit to the battle for our neighbors’ lives.

In fact, we ought focus on the selves doing the perceiving just as much as the objects of their eyes if we are to be part of repairing America’s brokenness. As the scouts Moses sent to the promised land reported of the land they saw, simultaneously revealing their senses of themselves:

The country that we traversed and scouted is one that devours its settlers. All the people that we saw in it are of great size;  there—the Anakites (Giant Ones) are part of the Nephilim—we looked like grasshoppers to ourselves, and so we must have looked to them. (Num. 13:32-33)

The truth? Windmills there be. Strong ones. Cervantes was right. So were the scouts: the legal/cultural landscape of America has devoured countless people whose only mistake was thinking the ground here was safe. But the giants are of our own making. We are not grasshoppers, helpless and insignificant. There are those like Ruth Messinger, Rabbi Tarfon, and Miguel de Cervantes Saavedra who echo their spiritual biblical ancestor Calev, the son of Yefuneh, who

…hushed the people before Moses and said, ‘Let us by all means go up, and we shall gain possession of it, for we shall overcome.’ (Num. 13:30)

We must rise to our full sizes and reclaim our places alongside our brave children, who are wiser regarding this ongoing tragedy than any of the adults ostensibly responsible for their well-being. We shall overcome. We must.

It might strike you as strange to imagine Cervantes’ man from La Mancha davening mincha, but the humble character also known as Hidalgo Don Quixote models the life described by Rabbi Joseph Soleveitchik in his Lonely Man of Faith:

[The] contemporary man of faith… looks upon himself as a stranger in modern society, which is technically minded [and] self-centered…What can a man of faith like myself, living by a doctrine which has no technical potential, by a law which cannot be tested in the laboratory, steadfast in his loyalty to an eschatological vision whose fulfillment cannot be predicted with any degree of probability, let alone certainty, even by the most complex, advanced mathematical calculations–what can such a man say to a functional, utilitarian society which is saeculum-oriented and whose practical reasons of the mind have long ago supplanted the sensitive reasons of the heart?

May we hear Cervantes’/Quixote’s prophetic response, whose translation from the original Spanish might also have been a prophetic channeling intended for our all-too-adjusted modern ears:

When life itself seems lunatic, who knows where madness lies? Perhaps to be too practical is madness. To surrender dreams — this may be madness. Too much sanity may be madness — and maddest of all: to see life as it is, and not as it should be!

One final word from a fellow prophetic voice to those already invoked. Rabbi Abraham Joshua Heschel is often quoted but just as often paradoxically considered an iconoclast who somehow also represented the entire Jewish community. The truth is, as usual, more complicated. He led by example, and some of his contemporaries did too. Today, more are willing to march, to partner, to engage. May we hear his clarion call as a communal mandate to not become, to never become numb. In one of the final interviews Heschel gave before his death, he articulated an essential commitment we must internalize for the sakes of our children:

When I see an act of evil, I’m not accommodated. I don’t accommodate myself to the violence that goes on everywhere; I’m still surprised. That’s why I’m against it. We must learn how to be surprised. Not to adjust ourselves.

About the Author
Rabbi Menachem Creditor serves as the Pearl and Ira Meyer Scholar in Residence at UJA-Federation New York and was the founder of Rabbis Against Gun Violence. An acclaimed author, scholar, and speaker with over 1 million views of his online videos and essays, he was named by Newsweek as one of the fifty most influential rabbis in America. His many books and 6 albums of original music include "A Year of Torah," the global anthem "Olam Chesed Yibaneh" and the COVID-era 2-volume anthology "When We Turned Within." He and his wife Neshama Carlebach live in New York, where they are raising their five children.
Related Topics
Related Posts