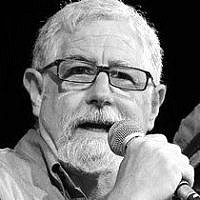 The Blogs
Seth Mandell
Apply for a Blog
Advertisement
Please note that the posts on The Blogs are contributed by third parties. The opinions, facts and any media content in them are presented solely by the authors, and neither The Times of Israel nor its partners assume any responsibility for them. Please contact us in case of abuse. In case of abuse,
Report this post.

Twelve days before his murder in 2001 was the last time I played a sport with my 13 year old son Koby.

It was on Yom Ha’Atzmaut, Israel’s Independence Day and we were at a picnic with a group of friends. We had taken over a baseball/soccer field and were having a barbecue to celebrate the holiday.

Sports were an important part of my childhood and I shared my love for physical activity with Koby. In fact, all through his childhood I waited impatiently for him to grow up enough so that I could really play ball with him.

As we were waiting for the food to be cooked, I grabbed a Frisbee and started to throw it around with Koby. In college and beyond I had spent hours throwing the disc back and forth with friends and I looked forward to doing the same with Koby and my other children.

Koby cut back and forth in front of me and I led him like a quarterback throwing to a wide receiver. His long legs gracefully ate up the ground beneath him. He was fast and he could catch and I had a great time watching him move. So now for the first time, as I whipped the Frisbee toward him without holding anything back, I realized that Koby had arrived. I looked forward to years of watching him run.

After we ate on that Yom Ha’Atzmaut there was a Kennedy family style touch football game. There were men and women and kids all playing together in a rambunctious free for all. Koby was on my team and I was the quarterback. Since he was fast and could catch the football I kept sending him on pass patterns and many times I looked at him and said, “Go long.”

After a while he said he wanted to play quarterback and eventually worn down by his persistence I let him. In the first huddle he looked at me and said, “You go long.”

So I did and I was in the end zone when Koby threw toward me. It came in low but I bent down and dived (gently) and scooped up the pass for a touchdown. I got up and ran around. I was ecstatic. My dream had come true. My 13 year old son had thrown me a touchdown pass! It just didn’t get any better than this I thought.

As Koby and I were celebrating, Aryeh, the captain of the other team, started waving his arms. “Wait a minute!” he yelled. “No touch down, No touchdown!”

“You were out of the end zone!”

“It doesn’t matter. You were out of the end zone!”

I couldn’t believe it. This guy was trying to cheat me out of my touchdown in a friendly game of touch football! I looked at Koby and I could see that he was watching me to see what I would do. It suddenly became a question not of whether we deserved the touchdown but what Koby and the other kids were going to learn from my reaction.

Koby looked at me. “What are you going to do?” he said.

“Listen Koby,” I said “we scored the touchdown, but it’s a friendly game. It’s not worth arguing about. Let’s just forget it.” I wanted him to look at sports as just another way to relax and have fun.

On the very next play as I tried to chase down a ten year old who was making an end run, I heard a pop in my thigh and knew immediately I had snapped my hamstring muscle and was done for the day.

I spent the rest of the day icing the hamstring and watching American football with Koby.

In the wake of his murder just days later, that touchdown and countless other father and son moments continue to both haunt and inspire me. Recalling them still leaves me with a sense of deep longing for my first-born but also inspires me to keep his spirit active in my life in and in the world.

Much of what he represented and how he acted have motivated the projects that we’ve developed at The Koby Mandell Foundation. Camp Koby, for children bereaved by terror or tragedy, is a reflection of Koby’s desire to reach out and help other kids feel better about themselves. Comedy for Koby is a reflection of Koby’s love and of jokes and laughter. And so Team Camp Koby, which will run in the upcoming Jerusalem and Tel Aviv Marathons, is about continuing Koby’s love of sport and movement.

Over the past thirteen years since his death, I’ve returned to recreational running as a form of personal therapy. Many times when that last hill is in front of me or when I’m feeling too exhausted to continue I remember that moment of Koby saying “You go long” and his memory inspires me to go on.

Koby would have loved to run alongside me in the Jerusalem Marathon and I’m sure I would have reveled in pride and joy when he pulled out in front of me and left me in the dust.

This March he won’t be there with us but he’ll certainly be there in spirit giving me and all those running alongside me the motivation to carry on. And in so doing his memory will again provide an incentive to help raise funds for the Foundation which proudly bears his name.

About the Author
Seth Mandell and his wife Sherri moved to Israel from America in 1996 because they loved Israel and wanted to put Judaism in the center of their lives and their children's lives. Their lives were devastated on May 8, 2001, when their 13 year old son Koby was murdered by terrorists. In Koby's memory, they created the Koby Mandell Foundation which provides healing programs for families struck by terrorism. Seth, a rabbi, believes that the Jewish response to suffering is to live a fuller and more engaged life. The Koby Mandell Foundation helps others who have suffered the trauma of loss overcome the isolation that keeps them from returning to life.
Comments