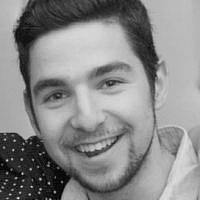 The Blogs
Samuel Brygel
Apply for a Blog
Advertisement
Please note that the posts on The Blogs are contributed by third parties. The opinions, facts and any media content in them are presented solely by the authors, and neither The Times of Israel nor its partners assume any responsibility for them. Please contact us in case of abuse. In case of abuse,
Report this post.

As you are probably aware, the last few weeks have been far from enjoyable for Israel. Since the first day of October there has been a spate of attacks on Jews all around the country, including 18 stabbing incidents. Just this morning suicide bombing entered this statistic for the first time with a Palestinian woman in a car detonating explosives in an attempt to kill Israeli soldiers and police officers at a checkpoint near Maaleh Adumim. The terrorists carrying out these attacks have not distinguished between the secular or the religious, the Zionist or the ultra-orthodox. Nor have they distinguished regarding location, with attacks occurring in Jerusalem and the settlements but also in Kiryat Gat and central Tel Aviv. Everyone is a target.

In comparing this wave of terror to the Second Intifada there is one noticeable difference for the common Israeli. We all now have smart phones, which means two things. Firstly, news of attacks is delivered to all of us instantly; contributing to an immediate angst whenever phones vibrate, where one prays it will not be a news alert regarding terror. Secondly, instead of seeing a still CCTV image of a grainy figure circled in red on the news following an attack, smart phones have provided us with clear and horrifying pictures and videos of attacks being carried out, with the crazed face of the knife-wielding terrorist appearing in our palms. I worry about the psychological implications this has on the Israeli people. I have noticed in the last week myself and friends becoming obsessed with the news this last week, checking news alerts on our phones every few minutes. But this is no normal time and likewise Israelis are far from a regular people. Indeed last week Defense Minister Moshe Ya’alon joined Jerusalem mayor Nir Barkat in urging all licensed gun holders to carry weapons to defend themselves against Palestinian terror. Could you imagine the carnage that would be caused in America if everyday citizens were asked to carry guns to protect themselves?

Internally, Israel has unfortunately suffered from party politics- with the main wrath directed specifically towards Prime Minister, Binyamin Netanyahu. Chairwoman of the leftist party Meretz, Zehava Gal-On, called on Netanyahu to resign last night in a protest outside his residence in Jerusalem. Similarly, Opposition Leader Issac Herzog has been highly critical of Bibi’s conduct throughout the last few weeks of violence, whilst asking for a complete closure of Judea and Samaria (West Bank). Such an extreme action would be politically and economically disastrous for Israel. A large portion of Israel’s economy relies on Palestinian workers. Furthermore, preventing these men and women from working in Israel not only halts basic yet inherently powerful human interaction that has existed amongst the two peoples since the foundation of the state, but would also increase protest participation on the Palestinian street as thousands more people would be not working. Thus increasing the cycle of violence as opposed to its diminution.

It is starkly clear that at such a time Israel needs to free itself from the crippling burden of party politics and aim to achieve a sense of national unity akin to Israel’s camaraderie during wartime. Netanyahu in recent statements has given his counterpart Herzog the opportunity to lead the way and join a national unity government, a move that would bear resemblance with then Opposition Leader Menachem Begin’s historic decision to join the first national unity government during the 1967 Six Day War.

Israel requires a unified nation and political leadership who are able to wholly focus their attention on the real causes for this terror. Palestinian Authority President and autocrat Mahmoud Abbas tells the world in English that he does not want “an escalation of violence”. Yet his Arabic is used to distribute leaflets through the means of his political faction Fatah, praising the terrorists and decrying “Eternal life and glory for our shahids (martyrs)”. Moreover, in what is almost laughable (although I have no doubt that the request will be taken very seriously by the United Nations), Abbas has called on the UN Human Rights Council to set up a commission of inquiry to “investigate all crimes perpetrated by Israel against our people,” referring to terrorists and violent Palestinian protesters in both Gaza and the West Bank.

World media has consistently labelled Abbas as the “partner for peace” and the “moderate” but whilst the Israeli government and its citizens have loudly and firmly rebuked revenge attacks, Abbas has remained silent throughout the violence and terror perpetrated by his own people. Abbas, the man who enjoys life in a $13 million mansion whilst Palestinians still live in “refugee camps” under his very authority is responsible for the incitement that is encouraging these terrorists to kill the innocent. The sheer silence of this “partner for peace”, coupled with the non-reporting of terror attacks throughout world media outlets has been deafening.

The utter isolation of Israel amongst the world has perhaps never been clearer than in this past month. Unfortunately, outward displays of anti-Israel bias at the United Nations, together with intrinsically flawed reporting regarding Israel in the media are not about to change any time soon. However, one thing Israel is capable of possessing that the world is unable to corrupt is shared goals and political harmony amongst its people. A significant step to this would be the creation of a national unity government, which has the potential to pave the way for far more effective management of the current situation.

Therefore I urge all protestors to keep away from Bibi’s lawn for a few weeks, there will be ample opportunity later, but right now Israel needs to focus on upholding the safety of its citizens.

About the Author
Samuel Brygel is a student in Melbourne, Australia. He is studying Arts and Law at Monash University. He is employed at Yesodei HaTorah College as a teaching assistant.
Comments