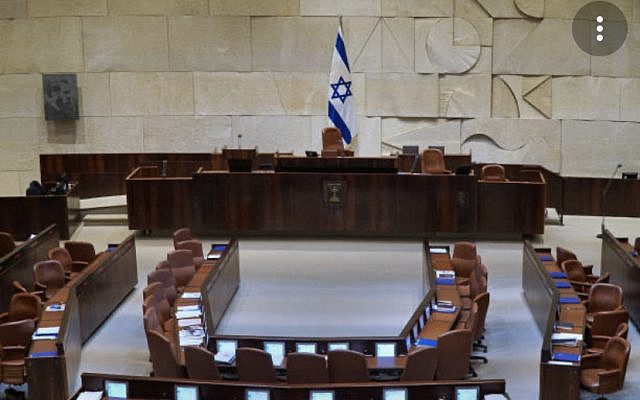 In the last week there have been several posts claiming that whenever former Prime Minister Yitzhak Shamir “saw MK Meir Kahane enter the Knesset plenum, he would leave because he was so opposed to his extremist views.”

Once again this is another classic case of the spread of misinformation. So let’s look at the facts. In July 1984, the election results brought a turnout of 78.8% and 15 parties were elected to the eleventh Knesset. Despite the right wing Tehiya-Tzomet party receiving 5 seats, the remaining 12 parties (a mixture of religious, right, left and Arab) garnered between 1 and 4 seats. The Alignment (Labor) led by Shimon Peres received 44 seats and the Likud, led by Yitzhak Shamir attained 41 seats.

Neither of the two large parties had any chance of forming a coalition with a 61 majority, so they agreed to work together for the next 4 years. Rabbi Meir Kahane with his Kach party was one of the three parties that received one seat. It was only towards the end of the eleventh Knesset that support for the Kach party was growing and Likud finally agreed to introduce legislation, with the support of the Alignment party to ban Kach.

However, during the time of the various bills being debated and passed to ban Kach, Shamir came under huge fire from Kahane when he spoke in the Knesset. It was just before the final legislation was passed, Shamir walked out on Kahane’s 2 or maybe 3 speeches.

It is just ridiculously stupid to say that Prime Minister Yitzhak Shamir left the chamber every time Kahane walked in or rose to speak. Three years later, a senior Likud member told me that Likud were losing support to Kach and that was the reason Shamir agreed to ban Kach.

Kahane’s policy was the expulsion of all Arabs from Israel. All of them. Even Arabs that were loyal to Israel and with Israeli citizenship. To compare this with Itamar Ben Gvir’s Otzma Yehudit party of today, is a desperate attempt to delegitimize a party that received nearly 550,000 votes from the Israeli electorate.

If Bibi is able to form a government with the right wing and religious parties before the time elapses, everyone should give the government a chance to operate. Does the country really want to continue to have endless elections costing the state billions of shekels?

Remember they called Menachem Begin a terrorist and extremist who would destroy Israel. But it was Begin who gave up the entire Sinai, removed Jewish communities and forged a peace agreement with the then arch enemy, Egypt.

They said Yitzhak Shamir was even more extreme with his pre-state Stern Gang connections. Yet he went into government with Shimon Peres and later agreed to the Madrid Peace Talks. Madrid paved the way for Oslo, (although I admit, I opposed Oslo because I didn’t think it had a chance of succeeding with Arafat leading the Palestinians.)

{Hate to tell you but I and others were right}

Facts will NEVER lose against misinformation and the spreading of made up stories.

About the Author
James J. Marlow is a broadcast journalist and public relations media consultant. He has previously worked for ITN, EuroNews, Reuters, Daily Mail, Daily Express, LBC Radio, Sky News and GB News. In addition he has trained and prepared hundreds of business and entertainment people, politicians and Rabbis, for the media, including television, radio and audiences.
Related Topics
Related Posts
James J. Marlow