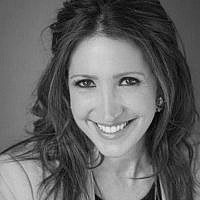 The Blogs
Atara Solow
Apply for a Blog
Please note that the posts on The Blogs are contributed by third parties. The opinions, facts and any media content in them are presented solely by the authors, and neither The Times of Israel nor its partners assume any responsibility for them. Please contact us in case of abuse. In case of abuse,
Report this post.

Neglect is one of any society’s most egregious sins. Widespread neglect involving children is detrimental to our moral strength as well as our national future. As Nelson Mandela once said: “There can be no keener revelation of a society’s soul than the way in which it treats its children.”

The State of Israel is a world-leader in innovation and technology, a member of the OECD, a global diplomatic power, and a nation which has achieved the seemingly impossible like making the desert bloom. It has faced unprecedented challenges to its security and economy from enemies near and far who have sought its failure and destruction.

It has absorbed millions of Jewish refugees from dozens of nations and helped build them anew in their indigenous and ancestral homeland. Israel is a resourceful and spirited society that by many measures is a great success. However, with these successes comes challenges that as a nation we can not afford to neglect or fail.

According to a report covering the year 2019 recently released by the National Council for the Child, the annual statistical report on the situation of children in Israel, more than 300,000 children in Israel are at risk, and of the three million children living in Israel, 865,00 are living below the poverty line.

In addition, over the past year, there was a 50% increase in the number of cases of abuse and neglect of children that were confided to social workers.

As we head towards a third election in a year, the focus once again has been placed on issues of security, religion and state and the economy. All of these are extremely important, but caring for our children and the future of our country should surely be no less vital.

As experts have noted, the reason our children our suffering is because their situation is not considered a national priority. This should shock us all into action.  Ahead of these crucial elections, we must realign our national priorities to find solutions to those in greatest need in our society.

Children have no voice, they can not vote and have limited agency. We need to build a coalition who will tell our decision-makers and opinion-shapers that our children should come first. We need to invest in their future by releasing more budgets into the social services that can be their lifeline and education that can improve their social and economic mobility and progress.

Most of all, our children look to us to give them hope and a future.

Migdal Ohr, an NGO which provides educational and social frameworks, since its inception in 1972, has demonstrated the benefits of ensuring impoverished children receive a good education where they don’t have to worry about food or other basic needs.

By providing a safe, loving and nourishing place for children to learn, they can realize their potential.

Of the over 15,000 students that have passed through Migdal Ohr schools, 80% have gone on to pursue a higher education, almost double the national average.

Many of those who attended Migdal Ohr’s various programs have gone on to serve Israel in the upper echelons of the military, judiciary, educational and business establishments, meaning that a relatively small amount of investment by our government in the basic needs of our children will reap untold benefits for our society and nation.

Israelis living below the poverty line do not need handouts; they need a helping hand to achieve their dreams and contribute to society.

Israeli children living below the poverty line can succeed, our students are living and breathing proof of that.

Now we need to reverse the neglect that has been shadowing the weaker sections of our society for far too long. We need to put this issue back on the frontlines of the national agenda.

There is certainly a debate to be had about the best way to go about this and perhaps the best time for this conversation is during an election campaign which is supposed to deliver a platform of ideas to entice voters.

It is our role as voters to demand that our prospective elected officials deal with the issues and seek answers to questions that we pose.

Poverty might not affect every one of us, but as citizens, Jews and Zionists we have a collective responsibility to make certain that we leave no one behind in our beloved State of Israel.

The sin of neglect is one which we must end.

The Rambam says that the best way to do Teshuvah (repentance) is when they are confronted with the same situation in which a person sinned, and they choose a different path.

Israeli citizens have unfortunately to go to the polls for the third time, but perhaps this affords us the opportunity to reorient our national priorities. This provides us with another opportunity to rid our society of the sin of neglect.

We can not afford another year where our children sink lower into poverty, malnourishment, danger, insecurity and neglect. The time to change this paradigm is now.

About the Author
Atara Solow is Executive Director of the American Friends of Migdal Ohr, a leading non profit that seeks to provide underprivileged youth in Israel with the essentials, education and empowerment necessary to become engaged citizens of Israeli society. She previously held leadership positions at Nefesh B’Nefesh and The Hartman Institute.
Comments