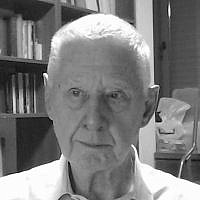 Human crises, whether individual or collective, can be very dangerous, but they also carry within them the promise of change. On the individual level, the British psychoanalyst Wilfred Bion (1897-1979), who had himself been traumatized as a young British soldier during the Great War (the First World War), then decorated for his battlefield bravery, called it “catastrophic change.” One example from our own culture is that of the Biblical Joseph, who is cast by his brothers into a pit or cistern in the ground, then sold to passing Ishmaelite traders (the Biblical Ishmaelites were Midianites, not Arabs; our identification of the Ishmaelites with the Arabs is apocryphal and erroneous), who in turn sell him into slavery in Egypt, only to rise and become that country’s all-powerful viceroy.

On the collective level, an entire nation, even humankind, can use a crisis to strengthen itself and to take vigorous action.  One such example was the mobilization of the U.S. economy in 1917, after the U.S. entered the Great War on the side of the Allies. This unleashed massive U.S. federal spending which shifted national production from civilian to war goods. Some three million people were added to the U.S. military and half a million to the U.S. federal government. U.S. unemployment declined from nearly 8% to 1.4% when unemployed workers took new manufacturing jobs and because the military draft removed many young men from the civilian labor force. A similar situation developed in 1941, after the Japanese attacked Pearl Harbor and the U.S. entered World War II.

The Coronavirus or COVID-19 crisis, which has been with us for several months now, is the worst health crisis our species has faced since the “Spanish flu” pandemic of 1918-1920, in which tens of millions of people died all over the world. Our world is divided into countries and nations, and their governments are coping with the pandemic as best they can. Naturally, all countries and nations are not the same, and all governments do not cope equally well, as we can see in Italy or Spain. Unemployment in Donald Trump’s U.S. has reached over 3.3 million people, which is 3.5% of the U.S. work force. The threat of nuclear war and global warming have caused the Bulletin of the Atomic Scientists to move its Doomsday Clock to 100 seconds to Midnight, the closest our species has ever been to extinction. Can we use this terrible crisis to improve our situation and to save our natural treasures?

I am neither an economist nor a hydrologist nor a geologist, nor a political scientist, only a psychologist, yet, in my humble opinion, in the case of our Dead Sea, which is really a lake, and which we Israelis like to call “the Seventh Wonder of the World,” the answer is Yes. Nine decades ago, in 1930, the Dead Sea Works were created in Sodom, Palestine, to exploit the minerals of the Dead Sea, such as potash. Several decades later, however, the same part of the Dead Sea, its Southern part, was leased out to developers, who built numerous hotels and beach resorts along side its southwestern coast. This was like selling the same piece of real estate to two different buyers. The Dead Sea Works caused the water level in the Southern part of the Dead Sea to rise, because of the brine that was dumped into the seabed. The rising water threatened to overflow the hotels. The “solution” was to build a dyke between the Southern and Northern parts of the Dead Sea and to “harvest” the salt from the seabed in the Southern part in order to lower the sea level there.

The Northern part of the Dead Sea, however, has been suffering from an ever-declining water level over the past few decades. Farmers along the Jordan Valley, pumping water out of the Jordan River, the only source of fresh water for the Dead Sea except for Judean Desert wadis that dry up in the summer, have almost made that “river” (in reality now no more than a brook) totally dry. In 1930 the surface level of the Dead Sea was 390 meters below Sea Level. Today, in 2020, it has dropped to 434 meters below Sea Level, forty-four meters lower that it had been when the Dead Sea Works were founded. The surface area of the Dead Sea has dropped from 1050 square kilometers in 1930 to 605 square km in 2016, a drop of 40% in surface area. All the developed beach resorts along the Northwestern coast of the Dead Sea were forced to make drastic changes to make access to the water possible for vacationers, tourists and visitors. Some of them have simply shut down.

The sea-level drop also caused a groundwater-level drop, causing brines that used to occupy underground layers near the shoreline to be flushed out by fresh water. This caused large sinkholes to open along the western shore as the incoming fresh water dissolved the salt layers, rapidly creating subsurface cavities that subsequently collapse to form these sinkholes. The sinkholes sprang up along Israel Highway 90, forcing our government to build new roads around them that made that highway much longer, and much more dangerous. We have thus progressively destroyed our Seventh Wonder of the World. Yet, the Geological Survey of Israel has suggested turning the area of the sinkholes into an Israeli national park (see Dead Sea sinkholes). The problem with that, of course, is that it will never restore the Dead Sea to the surface area and water level that it had.

Now that Israel is about to get a new unity government, however, it has a golden opportunity to use the crisis to save the Dead Sea and restore it to its former glory. The Dead Sea Works had been part of the Israeli-government-owned Israel Chemicals Ltd. which was later  privatized and sold to the Ofer Group, owned by the Ofer family. It makes potash products, magnesium chloride, industrial salts, de-icers, bath salts, table salt, and raw materials for the cosmetics industry, and has customers in over sixty countries, The Coronavirus pandemic has caused the company to lay off much of its work force, but it has also given the Israeli government extraordinary emergency powers. It can do pretty much as it wishes.

If this new Israeli government musters up the will and the courage to force the Ofer Group to close its Dead Sea Works in Sodom (think of the Biblical associations of this name), remove the dyke between the Southern and Northern parts of the Dead Sea, ban all pumping of water from the Jordan River, and dig a canal between the Red Sea and the Dead Sea, then the Dead Sea will quickly recover, its water level will rise back to 390 meters below Sea Level, and many new beach resorts will spring up along it Northwestern coast. In 2014-2015 Egypt’s current president, Abdel Fatah el-Sisi, built a 72-kilometer-long New Suez Canal, parallel to the original one, in one year’s time, because he had the power to do so, and because he was ambitious for his country, and hungry for money and glory.

The big question is whether the new Israeli government will have the will power and the courage required for such drastic actions. This is not only a political or an economic question. It is also one that has to do with the minds of our leaders and their followers. It means our government having the courage to face up to howls of outrage from the Dead Sea Works owners and from their employees, and from Israeli Jewish and Palestinian Arab farmers along the Jordan Valley. The new Israeli government will need to set aside billions of shekels from its new budget to compensate the Ofer family and its employees, and to provide the farmers along the Jordan Valley with alternative sources of water from Israel’s five desalination pants or from its Israeli Military Industry’s contaminated- groundwater- treatment facility at Ramat HaSharon.

The Israeli prime minister, Binyamin Netanyahu, has the incentive to do all of this: such a huge project to revive and restore the Dead Sea would take our minds off his indictments on criminal charges of corruption and bribery, and win over many environmentally-minded Israelis to his side. Unfortunately, unlike Egypt’s president, “Bibi” does not see the Dead Sea as an object worth spending billions to rescue. He is more interested in annexing the Jordan Valley to Israel than in reviving the Dead Sea. From 2002 to 2019  Israel has dragged its feet on building the Red-Sea-to-the-Dead-Sea canal with Jordan (see Israel-Jordan). Will the Coronavirus crisis move our embattled prime minister to change course?