Former Ambassador Michael Oren is no hero. In his recent bombshell interviews and the publication of his book he simply brought to light what I have been saying for a long time. Jews, even some worth noticing number in Israel, where they are pricklier, have hardly any backbone.

Michael Oren’s book, Ally: My Journey Across the American Israeli Divide is an echo to my ‘I told you so’ stance. 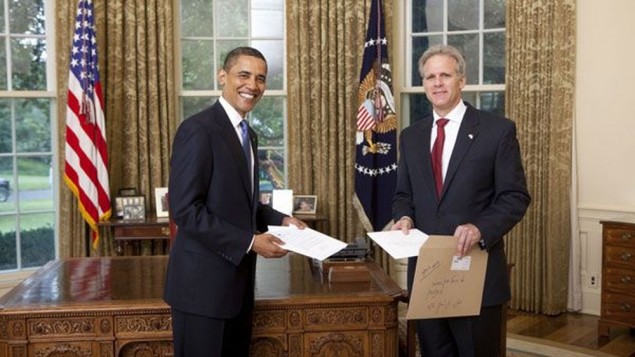 It is also a story of looking into the Jewish people heart and mind and asking ourselves, what are we doing?

I try not mincing words even when people look at me skew.

I told you Obama is not a nice person when it comes to Jews.

I told you that Jews are Obama’s best useful idiots’ tool.

I told you that Obama is not good for America and if you are a good American, then why vote for him?

I told you that Obama immensely dislikes Israel; he often sits on the fence on important issues concerning Israel waiting for the last minute to see where the chip is about to fall and then he throws his two cents, good or bad.

I told you that Obama is subliminally, sometime comes up with a Freudian slip – anti-Jew-anti-Semite.

I told you that when Obama, or for that matter any person, acts against Israel and her interests he or she acts against all Jews; as a Jews, if you support Obama you enjoy being abused.

I told you to rise and dissent, not write articles and speak quietly in chambers, against anything being anti-Israel-anti-Jews, like the BDS movement to boycott Israel, but you did not. You did however filled the papers and the blogs with billion worlds that got us nowhere.

I told you, the Jewish organizations do not really represent Jews. They represent their wealthy pocketbook along their hubris self-indulgence. They make worldwide connections and add to it some kind of fame. But for the Jewish people they are rather ineffective.

I told you the Jewish organizations are useful idiots at most time. And those who speak clear, like the ZOA have no voice but through articles hardly anyone reads or pays attention to. The ZOA is the voice of Jews for Israel in the wilderness. To become effective the ZOA needs to become the Jabotinsky* of the 21st century, be seen and heard by actions, not just by writing.

I told you it is time to stop the shush-shtil mentality under which the Jews lived for 2000 years in hostile hosting lands. But Jews do not know how. It is alright to be a good American and a pro-Israel Jew at the same time. There is no dual faithfulness here. I am for one this type Jew.
Think! After all what is the difference between American and Jewish-Israeli values, not religion?

I told you to amass pride in who you are, as Jews, who have nothing to be ashamed of. But no, you went far away in your reformed Judaism that hardly resembles Judaism as Judaism. Was that in order to appear to be more mainstream with other religions, to be like all other nations? Meaning, the end of a large portion of the Jewish people being Jews.

Keeping silent could mean in agreement, meaning that anybody who kicks the Jews, even for no reason, will not suffer the consequences. It means, Jews are the hefker of society, their suffering of no consequences. After all, what other country in the world is being pushed, more so demanded, under pressure, to act the way Israel is acting way too often? None. And by acting senselessly, in so many aspects, Israel paves the way to be demanded of her to act even more senselessly. How far? As far as its own destruction? When is it too late to turn back!

My question to Michael Oren is, why did you wait till now to tell us all about the scenes behind the curtains, to many are shocking revelations? You should have done it when Obama abused Israel first, even second. When it became a trend so many chose to ignore and make excuses for. You should have walked out of the first meeting when you were attacked or Israel was thrown under the bus. You were the Ambassador of Israel to the United States, meaning Israel’s mouth there, the defender of the Jewish land’s interests, not the representative of Israel’s necessity to appease her detractor(s). You should have told the world what Obama is doing frankly and politely. From your office in Washington DC you should have used the megaphone to tell all Americans, Jews and non-Jews, Israel, beware, you are under attack! Stop it in anyway possible. But no! You kept shush-shtil when Israel fell apart and bowed down to Pharaoh Obama. When Netanyahu came with his shocking fiat to freeze construction of Jewish homes, schools, kindergartens. You did not tell us how Israel was pushed to release hundreds of murderers of Jews so they can go murder more of Jews and for what? What was Israel to get back in return for such an extreme appeasement? The Arabs’ agreement to come talk to her? What a price to pay for what they do not want to do, never wanted!? And why should they!? You did not come out and told the American Jewry, you are being made fools, not at first and not later when the attack on the Jewish homeland increased and is still increasing exponentially. And you, Michael Oren, played the shush-shtil galut mentality all the way with all the other useful fools of Jewish ethnicity living in the United States and elsewhere.

A while back I wrote: “For 2000 years, much longer than their enslavement period in Egypt, Jews lives under the self-created law of shush-shtil, we keep quiet, we do not shake the establishment and leave us alone and just let us live.

I also dealt with the case of Lucas Koerner, a so called Jew, is young but already has a tainted mind; he represents the END of the Jewish Nation, if we let this case go away, if we practice the ‘Sha-Shtil’ mentality [do not say a word, just keep quiet], and we do not deal with it properly, if we do not say, NOT IN OUR NAME, LUCAS!

Telling the truth is one effective weapon. It cannot be denied or rebuttal. Civil dissent starts with one person who does not give a hoot what the establishment says or thinks. But Mr. Oren, you are not that person. You may make some money by chiding Obama on paper. But you arrived too late to the dance. Four years of your shush-shtil work is a long four years period that has caused much damage to Israel’s name and its stance in the world. The truth is that you badly represented Israel when you spent four years in the Ambassador of Israel to the USA chair, because you did not open your mouth the first time this appalling behavior toward Israel started to grow roots. So shame on you!

I am here to say, I am proud being a Jew and unlike so many, I will not keep silent.

*Ze’ev Jabotinsky, born Vladimir Yevgenyevich Zhabotinsky was a Revisionist Zionist leader, author, poet, orator, soldier and founder of the Jewish Self-Defense Organization in Odessa. With Joseph Trumpeldor he co-founded the Jewish Legion of the British army in World War I and later established several Jewish organizations, including Beitar, haTzohar and the Irgun. Jabotinsky did not fear anyone but he feared for the Jewish people and fought for their survival.