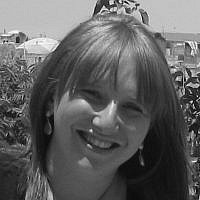 The Blogs
Ariella Kimmel
Apply for a Blog
Please note that the posts on The Blogs are contributed by third parties. The opinions, facts and any media content in them are presented solely by the authors, and neither The Times of Israel nor its partners assume any responsibility for them. Please contact us in case of abuse. In case of abuse,
Report this post.

The Christmas season is upon us, and yet instead of spreading messages of peace and good cheer, non-governmental organizations (NGOs) are using this celebratory time of year to advance their politicized anti-Israel campaigns.  Organizations such as Christian Aid (UK), Kairos Palestine, Sabeel, War on Want (UK), Amos Trust, and Adalah-NY employ offensive and inflammatory rhetoric in Christmas carols, holiday messages and cards, nativity scenes, and other gift items to push their immoral agenda. Even more alarming, is the inclusion by some of these organizations of blatant anti-Semitism in their campaigns, and the silence of their European funders. As funders, these governments are enablers and share the moral responsibility for the repugnant actions of these organizations.

The manipulation by these organizations of religious symbols is offensive; instead of promoting co-existence and peace, as one would hope human rights groups would, they revive deep-seated Christian anti-Semitic theology. At the same time their messages conspicuously omit any references to deadly terrorism and other violence perpetrated against Israeli civilians.

For example, Christian Aid, which  largely operates on a budget that stems directly from the public pockets of Britain and Ireland, holds a one-sided view on the Israeli-Arab conflict. Their publications systematically ignore the Palestinian role in the ongoing conflict and disregard Israel’s right to self-defense.

As in previous years, Christian Aid has used their Christmas materials for politicized attacks against Israel. Christian Aid has published an “Advent Journey” and “Advent Reflections,” both under the title of “Healing in this Holy Land.” Within these publications there are clear theological overtones:

In Bethlehem, where Jesus was born…there is also an enormous wall around part of the town that makes the lives of Palestinians living in Bethlehem very difficult because they cannot move freely. As you think about Mary and Joseph making the journey to Bethlehem, pray for the people who live there now and whose lives have been affected by conflict.

Christian Aid describes travel restrictions imposed on Palestinians and other forms of suffering due to roadblocks and checkpoints, while completely removing the context of Palestinian mass terror which necessitate these security measures.

Two blatant examples of antisemitism this season include Kairos Palestine and Sabeel, who both invoke antisemitic imagery by linking their attacks on Israel to the ancient libel blaming the Jews for the death of Jesus (deicide).

Sabeel, which describes itself as “an ecumenical grassroots liberation theology movement among Palestinian Christians,” is funded by the Swedish government via Diakonia. They are active in anti-Israel political campaigns, including church divestment resolutions, and support a one state formula, meaning the elimination of Israel as a Jewish state.

The director of the organization, Naim Ateek, has been no stranger to the use of offensive rhetoric in regards to Israel; this year in their annual Christmas message, he makes use of an antisemitic analogy equating the Palestinians with Jesus, and Israel with the evil Roman Empire responsible for his death. In a deft reversal of where Jews fit into the historical narrative, he writes that:

Kairos Palestine, a Christian Palestinian group centrally involved in political warfare against Israel, including the Boycott, Divestment and Sanctions campaign, published a 32-page “Christmas Alert” together with Applied Research Institute Jerusalem (ARIJ). This text includes distortions on the situation of Palestinian Christians, for instance blaming Israel for a “severe water crisis” in villages near Bethlehem, ignoring the Palestinian Authority’s full responsibility for this crisis through mismanaging water distribution in Palestinian areas.

The falsehoods in the Christmas alert are interlaced with biblically-based sermons. One of these compares the situation of the Palestinians today with the “Parable of the Vineyard and the Tenants.” This parable invokes classic antisemitic deicide themes: the tenants (the Jews) reject the word of God (the owner of the vineyard) and kill his son, causing their land to be taken from them and given to “others.” This document casts modern day Jews as the evil tenants, and the Palestinians as Jesus, whom the tenants seek to kill.

Funding from European governments, both directly and through outsourcing designated for international aid, which is provided to these groups and their theologically-charged messages, exacerbates the impact and damage. The parliaments and taxpayers in the EU, Ireland, UK, Sweden, Netherlands, Spain, and Norway should demand full transparency and an immediate end to such hate-producing activities. With this abuse of holiday and religious symbols, the NGOs and charities that claim to promote moral agendas are not offering messages of peace and good cheer. Rather, their intolerant and theologically charged messages further an already polarized and violent conflict.

About the Author
Originally from Canada, Ariella is a graduate of Carleton University in Ottawa. She recently moved to Israel, and is the communications associate for Jerusalem based research institute, NGO Monitor.
Comments