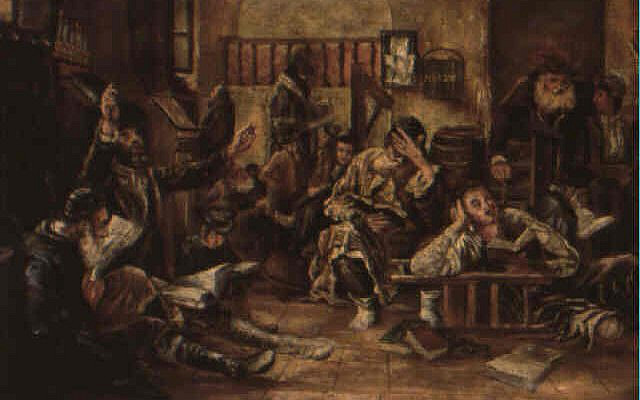 One day the Tisha B’Av fast will become a yom-tov.

The prophet says (Zech. 8:19): “The fast of the fourth month (Tammuz), of the fifth (Av), of the seventh (Tishri), and of the tenth (Tevet), shall be to the House of Judah joy and gladness”.

All these fast days are connected with Hurban HaBayit, the destruction of the Holy Temple. The message is reinforced by the Psalmist (Psalm 147:2) with the promise, “God will rebuild Jerusalem”.

In the meantime Tisha B’Av is a day of sadness and gloom, observed by practices of mourning and the reading of the graphic scenes of destruction in the Book of Eikhah (Lamentations) and the poetic dirges or Kinnot.

All raise the same problem – not only “What happened?” but “How could it have happened?” If HaShem was the cause of the destruction, how can we call Him a good God? If it was an external enemy, why were we the victims? If our own sins caused the pain, can’t our merits save us?

Rav Soloveitchik warns that this is more than an academic question. The pain went to the heart, not just the mind; it was cardiac, not conceptual.

Yet nothing can stop us asking questions and seeking answers – a hard ask for a people which historically was little concerned with analytical theology. The Bible and Talmud do not spell out the basic tenets of faith. Nor does the Midrash which, despite Jacob Neusner’s claim that it has a sense of history, never seems to reach a final position but merely endorses the rabbinic maxim, “Whatever God does, He does for good” (Berakhot 60b).

Alright, but why are the details such a mystery? Our reason cries out to be used!

We are angry, with God, with the enemy, with ourselves. We are angry at the loss of the Temple, at two millennia of tragedy, at the Holocaust. But is anger our only option? A medieval book says, “Anger begins with madness and ends with regret”. OK, we are mad, but why the regret? Are we blaming ourselves too much?

Can we posit the Problem of Good against the Problem of Evil, see the goodness in our universe, and accentuate the positive? Samuel Alexander says in “Space, Time and Deity”, that there is no clear-cut contrast between good and evil, and “elements emerge from the chaos of evil and are built up into good”.

It would be easier if there were simple answers for everything. But that’s not how Judaism works. It oscillates. Sometimes we are believers, sometimes rebellious doubters. We always know God is there, but sometimes we find it harder to find Him.

We have days when we suspect He is playing hide-and-seek. We yearn for Him to come out of hiding and laugh – at us, with us – and assure us that He will soon wipe out the evil blotches in Creation.