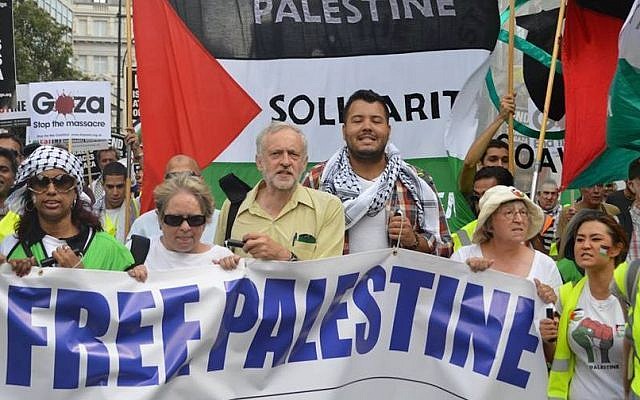 Not Jeremy Corbyn! As Mr Jeremy Corbyn is being raked over the coals I can only admire him more. He’s doing what a leader does … guiding us through the irresolvable toward the attainable. As a signatory of Jews for Justice for Palestinians, a British Subject, and a Jew, I salute Mr Jeremy Corbyn.

But what he has said has offended many who persist in wearing their myth-inspired blinkers. They are the self-identified social outcasts in our global community. And they dare accuse Mr Corbyn of anti-Semitism when all he does is calling the beast by its name.

It is a no-win game for the ultra-nationalists. They label themselves Zionists. They have forgotten. The Prophetic Ideals in the Sacred Texts define Zionism as becoming the light among nations, to create a heaven on earth. Israel has become a hell on earth. It has become a danger to itself. Judaism teaches us to look into the mirror of our own realities, to become better people. The Israeli brand of Zionism has taught us to ignore our collective virtues and, in fact, to make a vice a virtue. How many olive groves have we not destroyed?

As it turns out, the most potent wall the Zionists have built is that which holds up the myth. To the religious-nationalists and the secular ultra-nationalists, the wall aims to fence the non-Jews out. However, until the world shouts, “Mr. Netanyahu, tear down that wall,” the barrier continues to lock in the Jews inside their own egocentric fortress. (*Kindle locations 1820-1824)

Many of us have fooled some of the people some of the time, especially ourselves. We now realise we cannot fool all of the people all of the time, including ourselves. We’ve been taught we cannot get away getting something for nothing and that no one can get away with murder. And sooner than later, we must pay the Piper. These are fundamental convictions in our Judaic conscience.

And yet … many of us are still beguiled by ultra-nationalism. Some Jews feel Israel is a supra-national theocracy for Jews-only when most Jews reject their Jewishness. They have become atheists. The Sacred Texts clearly asserts, in a democracy, we must humbly dignify the other. How can you dignify God if you don’t dignify the other? They are also created in His image. Nonetheless, in Israel, the Chosen are more equal than those who are not. And so, Israel’s ‘democracy’ is more of an ethnocracy, which is not a democracy. It is apartheid, translated from Dutch “to be separated.”

Mr Corbyn is merely trying to free Jews from bondage. Most Israelis and most Palestinians, tired and stressed out, seek a future without war. Both do not support indiscriminate brutality against the other. They desperately want security and peace.

The vast majority of the Israeli Jews (73.8%), Israeli Palestinians living inside Israel with Israeli citizenships (97%) and the Palestinians (under enemy control in Gaza and the West Bank) (85.7%) want peace, heretofore, either not realized or denied by all sides of the Divide. This is breaking news affirmed by the Jerusalem-based Israel Democracy Institute and the Ramallah-based Palestinian Centre for Policy and Survey Research. (*Kindle locations 512-521)

Impotence among leaders? What are they waiting for?

When will they serve the main entre, the most tasteful that the best of the best chefs can offer? The sweet aroma of peace is in the air, all around us.

Are the politicians just stumbling over their own hurdles? Is a movement toward peace solely about real estate, jobs, position, or status; power and money? Or, should it be about humanity, community, and the public interest. When Dr Martin Luther King, Jr. talks about the mountaintop, he is talking about a higher level of consciousness, a movement that harmonises the “I” with the “we” and the “we” with the “I.” (Kindle Locations 534-539)

In the past, those in command of the peace talks dare not take off at full throttle. The results: one deadlock after the other. Oslo, Ottawa, Shepherdstown, The Wye Plantation, Annapolis, Geneva, Madrid, Nicosia, Washington, D.C., London, Bonn, Vienna, and Paris have succeeded in producing stalemates often ending in standoffs with one foot in the stirrup, the other in the sand. (*Kindle Locations 543-545)

Which leader in the region will creatively combine the many regional contradictions to produce a well-balanced yet spicy feast? The leadership should concoct more palatable recipes. And, if any one of the leaders can’t stand up to the heat, tell them to get out of the kitchen. A leader who cannot hammer out an acceptable peace resolution is not worth his or her salt and should be replaced. (*Kindle Locations 558-562)

On ALL sides of the Divide, we lack leadership. None has yet struck an acceptable peace package. The majority of people on both sides, reject the litany of proposed resolutions ostensibly designed to fail from the start. “Only 39 percent of Palestinians and 46 percent of Israelis support a peace agreement package, riddled with obstacles.” (Kindle Locations 546-558)

It takes a leader with leadership to accomplish the almost impossible. Mr Jeremy Corbyn is endowed with such qualities. He is worthy of becoming Prime Minister. He can and will effectuate positive results at home and abroad. And so, what are the challenges when it comes to the Israeli-Palestinian Quest to Co-Exist? Frankly, the same old thing:

The bigger question is, who will initiate action to resolve the irresolvable? I’m betting on a breath of fresh air. Someone other than those who have failed us over and over again. Who? A maverick! A rebel! A dissident against the status quo! Jeremy Corbyn!

‘Christian Zionism … Enraptured Around a Golden Calf’
By Abraham A. van Kempen