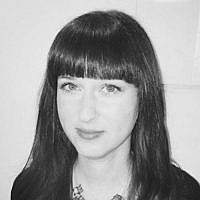 The Blogs
Claire Polansky
Apply for a Blog
Please note that the posts on The Blogs are contributed by third parties. The opinions, facts and any media content in them are presented solely by the authors, and neither The Times of Israel nor its partners assume any responsibility for them. Please contact us in case of abuse. In case of abuse,
Report this post. 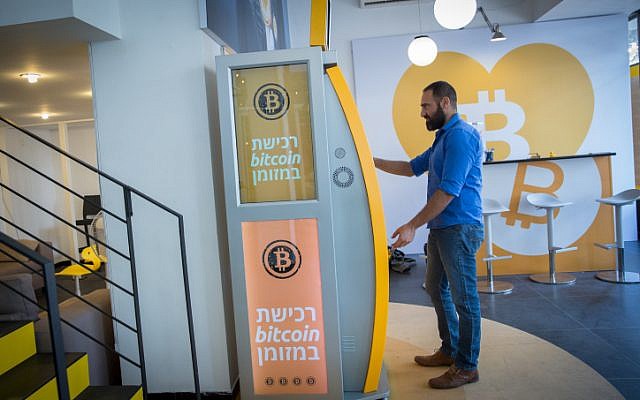 View of the Bitcoin Change center on Dizengoff Street in Tel Aviv, showcasing a museum describing the history of the cryptocurrency as well as hosting a Bitcoin ATM and a meeting place for cryptocurrency community meetups. November 05, 2017. (Miriam Alster/FLASH90)

It is safe to say that If you are an Angel Investor, Venture Capitalist, or looking to be a C-level executive at the right startup, this question will haunt you. Will you hit fortune or a sea of troubles fit for a Shakespearean drama?

Public interest in Bitcoin skyrocketed to the top of the charts at $19,340 just before the close of the year, joining the ranks of the 20 largest stocks in the S&P 500 alongside the likes of Google, Amazon, Apple, etc. The market value is at $270B. That’s not small change.

Now ads are popping up all over the place with promises for “get rich quick” investments and everyone from legitimate financial investors to yoga teachers are trying to get a piece of this pie.

To paraphrase a Facebook friend, “yes, it seems risky but the returns are so real!”

Unfortunately, with lack of controls and regulation, the scams are hard to weed out from the legitimate blockchain technologies, thus Facebook announced their plan to crack down on the problem on January 30, 2018; despite founder Mark Zuckerberg’s earlier interest in cryptocurrency.

And Israel startups may bear the brunt of this crackdown.

With Israel at the height of startup innovation, Forbes recently identified Tel Aviv as the next hub of cryptocurrency and blockchain startups, following Eastern Europe and ‘Crypto Valley’ in Switzerland.
Initial coin offerings (ICOs) have created a new form of investmentthat permits these startups to sell cryptocoins, which makes funding their projects that much easier. But it is a risky innovation, largely because it is relatively still in its infancy and the security measures are still works in progress. But if Israel is good at anything, it’s internet security.

For better or worse, new Fintech startups such as blockchain and cryptocurrency have been erupting rapidly in Israel in the past year, against the shadow of the controversial Forex and Binary Options companies from the past that left them prey to scrutiny. Nevertheless, enthusiastic entrepreneurs eager to reach high return on investments in limited time are ready to capitalize on the hottest trend in high tech.

Israel is an innovation hub for a reason. It is a country of risk-takers with an attraction to new technologies and a desire to succeed. Thus, of course, they are attracted to this potentially life-changing technology.

But guess who else it attracts — people who want to capitalize on you.

Times of Israel reporter Simona Weinglass warned us that many out of work Binary Options ex-employees are jumping into this market. This alone is enough to keep your eyes open. Their ads use the same language they used to entice uninformed investors to tap into their life savings with promises of “get rich quick” schemes and warnings about investing in a speculative market.

Serial technology entrepreneur and founder of Invest.com Moshe Hogeg has proclaimed that he will invest in every blockchain startup that approaches him. Yet he claims that binary options companies will not be successful in cryptocurrency.

Hogeg told Weinglass at The Times of Israel, in writing:

Whoever mentions Blockchain technology and binary options in the same sentence is falsely accusing the next industrial revolution to be a fraud, and that’s why there isn’t one binary options company that has succeeded on the blockchain.”

But don’t you find this statement questionable when Invest.com acquired Anyoption and replaced its binary options platform with cryptocurrency shortly after binary options was outlawed, leaving the Bursa and similar districts a ghost-town?

Now, that’s not to say that all blockchain is all a SCAM. Blockchain technologies are finding homes in legitimate sectors including Medtech too. But watch out for the rogue companies and their affiliate sites.

Do a little homework before jumping in head first. Call this a public service announcement. Call it paranoia. It’s important to get some knowledge before you drop cash on the latest craze.

Cryptocurrency is best described as a peer to peer virtual currency or token system that only exists in cyberspace. The virtual system bears an uncanny resemblance to the credit card, although it is not connected to a bank or any authority for that matter — let alone anyone at all.

Cryptocurrency uses “cryptology” or a hidden system for security through the use of a complicated 64 digit computerized mathematical system called mining. A user is offered one bitcoin block, approximately 25 coins, for each mathematical solution. When the block is completed, the next block in the sequence is added, hence the term blockchain.

It is nothing more than a modernized fiat system whereupon the currency only has as much meaning as we place on it. Kedge professor Eric Pichet explains:

“Bitcoin has some of the attributes of a headless currency. Nevertheless, it has no intrinsic value ‒ not even as a collector’s item because it is intangible,” emphasizes Eric Pichet. ”

But if the dollar is no longer backed by gold either, what’s the harm in participating in the revolutionary technology that could change our relationships with banks as we know it?

After repeated global economic crises, the world is looking for a sustainable solution and cryptocurrency offers promising technologies through decentralized banks and tightened internet security.

History and Current use of Bitcoin

Cryptocurrency software was initiated anonymously under Bitcoin in 2009 under the pseudonym Satoshi Nakamoto. Nakomoto’s anonymity perpetuated the controversy that Bitcoin was first invented in order to purchase illicit substances online with a concealed identity.

The Bitcoin was under intense scrutiny in the past due to money laundering and illicit online drug trade activities via the Silk Road and subsequent technical glitches that left if prey for hackers, leaving Mt.Gox bankrupt (one of the largest Bitcoin exchanges at that time). But the industry recovered quickly and many copycat startups emerged.

While it is largely unregulated, some companies and governments are seeking to change this. The United States has approved regulations in some states, while Israel wavers in opinion due to concerns about criminals and terrorist organizations. Despite concerns, Israel merely issues warnings about money laundering while still permitting the use and development of the technology.

For now, they are merely treating it as a valuable asset to use with knowledge rather than a currency.

Some sources speculate that cryptocurrency could be the wave of the future and it will be the end of banks as we know it. The experimental cryptocurrency may not be backed by gold, but it is certainly worth more. And it is not just reserved for tech Geeks and counterculture rebels anymore.

It has become an acceptable currency for mainstream entities such as Subway, Apple, and Cheap Air, as well as little mom and pop shops, attracted to the low overhead feature and/or ease of international trade. Engineers have even designed Smartphone apps in order to facilitate these transactions smoothly. Others created ATMs. And now Telegram is among the leading companies who plan to employ the technology for their popular messaging startup.

Bitcoin’s sudden market peak created a major hype among potential investors, including those with little understanding of the financial market, let alone technology.

Former hedge fund manager Michael Novogratz noted that the cryptocurrency hype is a bubble that opens itself up to fraud. And he is expecting the bubble to burst sooner than later. JPMorgan Chase and other big banks back him up on this. But then again they have special interests at stake.

In fact, Citi Foundation issued a grant to the Weizmann Institute’s computer researchers in 2013 so they could evaluate the black market connection to the digital currency and CNN Tech called their bluff. How can you financially support a research project if you have a special interest in mind–say you are one of the world’s largest banks?

Still, the bank’s ties with the government are strong.

Business Insider confirmed that many governments are debating the issue of cryptocurrency as they consider regulating it or banning it for fear of a decentralized economy.

Right now, the technology is unstoppable, even with scrutiny. The risk is worth the potential outcome.

Thousands of reputable cryptocurrency companies like Litecoin, Ripple, Etherium, etc. have emerged. In addition, blockchain technologies are extending the technology to other sectors like healthcare.

But how do we siphon the good from the bad?

Take your time. If something seems questionable, it likely is.

Chances are if the startup is hosted out of a Fintech hub like the Floor, right in the same building as the Tel Aviv Stock Exchange (TASE), it is probably up to par. Same goes for situating itself in other startup hubs with strict screening processes. Even so, ask the tough questions. Meet with accountants and lawyers. Ask to see their finance and computer science diplomas (and actually check them out). Or do a background check on the entrepreneur’s technical experience from the army.

Bottom line: There is no such this as “get rich quick” in startups or investments. Even the most lucrative people succeeded through knowledge and perseverance.

About the Author
Claire Polansky is a Marketing Writer for Tel Aviv University and a freelance writer. She holds a Ph.D in East-West Psychology, an M.A. in Art Therapy/Counseling Psychology, and a BFA in Fine Art. She uses her media knowledge to generate conversations about Israel-based startups and natural health.
Related Topics
Related Posts
Comments
Advertisement