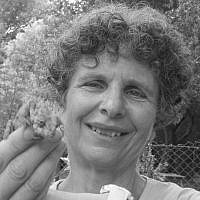 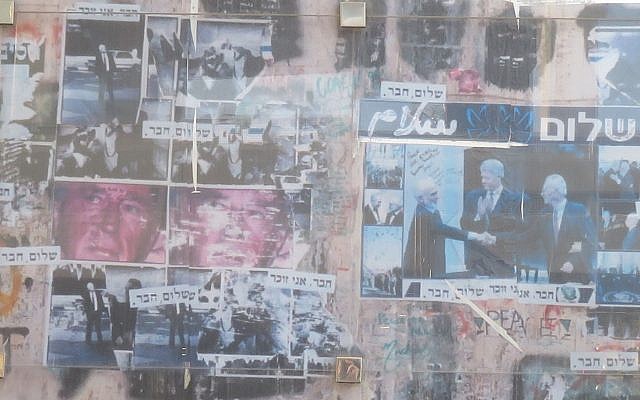 Mural at the site where then-prime minister Yitzhak Rabin was assassinated, near Rabin Square in Tel Aviv. (Times of Israel Blogs: Fred Maroun)

It has been told to you, O man, what is good, and what God requires of you: Only to do justly, to love kindness, and with modesty walk with your God. (Micha 6:8)

A few weeks ago, our guide spoke fairly and I found myself crying.

Let me backup and explain. I’m taking a tour guiding course, which, here in Israel, is a major undertaking. I started it as a statement of optimism, and a way to detach myself from living too much through my children. I didn’t expect the course to be earth-shattering, but it is. Each week, each tour, I see another facet to this land, and another gaping hole in my education. The organizer of the course is Yuval Zelinkovsky, but for each tour we get a different guide. At the end of December, we had a second tour of Jaffa-Tel Aviv which started in Sarona and ended at Rabin Square.

It was five in the evening, getting dark, and raining when we reached the Rabin Memorial. We huddled under an overhang, our notebooks out. I started a new page with the heading, “Page 12, Tour 26, 5:10 p.m., Rabin Memorial” and waited for the lecture, or what we call a “guiding unit.” Our guide for Tel Aviv told us Yuval would guide this section, and he began.

I was cold and tired and not expecting anything special from a story I’d heard many times, but soon I was riveted. Yuval told us he had been at the peace rally with his army buddies on that Saturday evening in 1995. Afterwards, he went up to a nearby friend’s apartment. A short time later, they heard a strange sound. They opened the window and realized everybody in the apartment building was crying. I can hear an echo of that sound from his description.

Then he described the situation as it was in Israel 26 years ago. He spoke about the hope held by some that Rabin’s government was leading Israel to a true peace after so many years of war. He also spoke of the fear held by others that Rabin’s path was leading towards greater vulnerability and worse violence. He spoke of both sides with emphasis and empathy. He also described the extreme religious and how they decreed that Rabin was “rodef” (a pursuer) who endangered Jewish lives and he explained that “din rodef” is a concept in Judaism that it is permissible to kill a person who is threatening to take a life. Yuval did not make excuses for the murderer, or for those who incited murder, but he respected Judaism and did justice to the concept.

On the evening of November 5th, 26 years ago, my sons were asleep as I was puttering around the house when my mother called me and told me that Rabin had been assassinated. We cried together over the phone. I was shocked and dismayed, grieved that a man who had spent his whole life working for our country was murdered. I was outraged and wanted the murderer, and any who had aided him, to be punished. That was my initial normal response, no doubt like the vast majority of Israelis. The next day, things changed. I personally, as someone who did not support Rabin’s path or his government, was blamed for his murder. All of us on the opposing side were treated as if we were complicit. It was deeply unfair. In response to that injustice, my response to the murder changed. If someone asked me about it I would say, “I’m sorry I was deprived of the chance to vote against him in the upcoming elections.” That was all. I lacked sympathy for those who mourned.

But last week, standing there in the rain, listening to Yuval, I was released from my defensive posture. I imagined the devastation felt by Rabin’s supporters, and I cried for what we’d lost.

As tour guides, this is an example for us. There are many controversies in our land. To show the truth about Israel, a place that is important too many peoples in many different ways, it is imperative to find Yuval’s ability to understand, empathize, and explain the opposing positions fairly. I do not advocate excusing evil; I advocate gaining the ability to distinguish between evil and disagreements that are for the sake of good. For example, there are Palestinian Arabs who want to build a country for themselves. It is necessary for us to understand, and explain their point of view fairly. However, there are others who want to destroy Israel; building is not on their agenda and no excuses need be made for them.

Beyond tour guiding, there is a bigger picture. Much of the world, and perhaps particularly the United States, is in the grip of irrational deafness. I will not go into details because it’s obvious, but think of the healing that could take place if people would take a deep breath, listen to the other side, and be just.

I think many people who read that last rather trite sentence will nod their heads in agreement and think to themselves, “Yes! If people would only listen to my rational and well-considered positions, things would be better in this world.” That is not what I’m suggesting. I’m suggesting that all of us listen to our opponents — political, religious, personal — and give them a fair hearing.

It would work miracles.