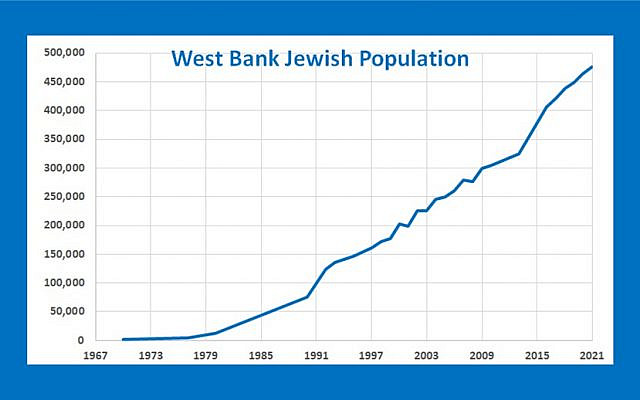 Growth of Jewish population in the West Bank since 1967 (source of data: https://www.jewishvirtuallibrary.org/jewish-settlements-population-1970-present).

Israel’s Foreign Minister Yair Lapid raised a concern about what he predicts will be an intensified campaign to label Israel an apartheid state. He said, “In 2022, it will be a tangible threat.” If Lapid is right, and I believe that he is, Israel will have to fight back against this threat, but simply mounting a public relations campaign to counter the accusation will not work.

When one looks at Israel’s ethnic and religious diversity and at its laws and policies that do not typically discriminate against citizens based on those grounds, labelling Israel an apartheid state is not credible, especially if we compare Israel to the Arab states around it. The accusation, however, is far more credible if one considers the West Bank to be part of Israel. In that case, Israel has within it stateless Palestinian who don’t have the option of applying for Israeli citizenship and who consequently can never expect to have the same rights as the Israelis who live next to them in the West Bank.

But is the West Bank part of Israel? There is overwhelming evidence that for all intents and purposes, it very much is.

First, there is the fact that Israel’s population in the West Bank is at half a million and still growing, which is over 5% of Israel’s population (which is similar to the state of New York compared to the US population). By continuing to build settlements on that land, Israel is giving a not-so-subtle indication that it wants to keep it. Many settlers are even quite blunt about it. Rabbi Elishama Cohen, for example, claims, “this place is fully ours” when referring to the illegal settlement of Homesh.

As the Jewish Virtual Library states, “The changing demographic picture in the West Bank makes the prospect of a two-state solution based on anything like the plans promoted by Clinton or Obama highly unlikely. It is hard to imagine any Israeli government that would be willing to force 90-140,000 Jews from their homes […] The situation will only become more complicated as the number of settlers continues to grow.”

Israel’s own actions leave no doubt that it considers the West Bank as part of Israel. For example, Israel’s anti-BDS law passed in 2011 by the Knesset makes no distinction between boycott of Israel and boycott of the settlements. In fact, the law says, “the State of Israel, one of its institutions or an area under its control,” which includes the West Bank. Another example is that Israel insists on calling products made in Israeli settlements in the West Bank as “Made in Israel”. It was even able to convince the Trump administration to go along with that policy.

Some people argue that the expansion of settlements is the fault of the Arab refusal to make peace and the fault of Palestinian terrorism. After all, there were no settlements in the West Bank in 1967 when Israel won the Six Day War and indicated its willingness to negotiate peace with the Arab world, which the Arab world rejected. And there were only 200,000 settlers in the West Bank in the year 2000 when Israel negotiated a two-state solution in the form of the Clinton plan and which the Palestinians rejected. However, while the Arab refusal to make peace allowed Israel to build settlements in the West Bank, it certainly didn’t force Israel to do so. One can argue that Israel needed to maintain military presence in the West Bank due to security concerns, but that need does not extend to building settlements. In the end, however, regardless of the reasons why the settlements were built, their existence now and the way they are treated by Israel makes the West Bank part of Israel, which means that unless Israel makes dramatic changes to its policies in the West Bank, fighting against the apartheid accusation is futile.

Many Israelis argue that the West Bank is in fact Judea and Samaria (roughly, Judea is the part of the West Bank that is south of Jerusalem, and Samaria is the part of the West Bank that is north of Jerusalem), which is traditional Jewish land, and that it therefore legitimately belongs to Israel. There are also legal arguments that justify such an opinion, which are explained briefly by the Jewish Virtual Library. Based on this, Israel may be justified in annexing the West Bank; however, if it does that, it knows that it would have no choice but to offer citizenship to its Palestinian residents (otherwise Israel would without a doubt be a form of apartheid state), which would significantly weaken the Jewish majority in Israel. Israel also knows that it would face stiff international condemnation for such a unilateral move.

Consequently, Israel tries to have its cake and eat it too. It treats the West Bank as if it was part of Israel while avoiding the risks and pains associated with outright annexation. One can argue that this is not a great crime, especially compared to crimes perpetrated against the Jews, including by Palestinian terrorists, but that does not weaken the apartheid accusation.

If Israel is serious about fighting against the threat that Lapid has identified, it must immediately and significantly change its policies in the West Bank. It must freeze settlement growth in the West Bank outside of large blocks that are reasonably expected to remain part of Israel, it must unconditionally shut down illegal outposts, and it must start planning how it will handle settlements that cannot reasonably remain part of Israel.

If Israel does not take these actions, it is tacitly accepting that the West Bank is part of Israel, and therefore it is giving up on fighting the apartheid accusation. As Lapid implied, this accusation will likely cost Israel precious support internationally and most importantly among Americans. Unless it changes course in the West Bank, Israel is putting its own future at significant risk.