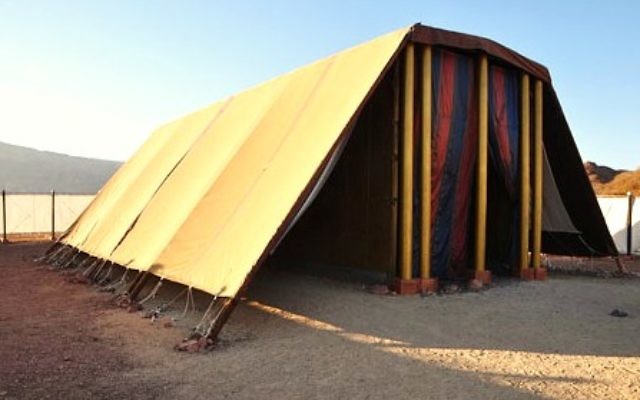 In chapter 36, verse 18 of Exodus, we read that Bezalel made fifty brass clasps “to join the tent together to become one / l’chaber et ha’ohel lih’yot echad”. The verse has a gorgeous numerology (double chai 36 and chai 18). But it seems like just another detail in a long list of things brought and fashioned – brass and gold, purple and scarlet, precious stones, hooks and beams and vessels. But to some of our ancestors, the verse meant much more.

The Tent of Meeting or Ohel Mo’ed and the Mishkan, the portable desert sanctuary or Tabernacle sheltered within the Ohel, weren’t just works of beauty and places of holiness and worship for them. The Ohel and the Mishkan were a model of the entire Creation. Josephus wrote, “Every detail of the Tabernacle was made in way of imitation and representation of the universe” (Antiquities 3.7.7), and the sages wrote, “The Mishkan corresponds to the whole world” (Midrash Tanchuma, Pekudei 3).

According to Midrash Numbers Rabbah (Naso 12:4) the silver or kesef used in the Mishkan represents the firmament that covers (m’khasef) the whole Creation. Gold, because it can be yellow or green or red, represents the many colors of the fruits of the Earth. The purple-dyed thread woven into the Ohel and the curtains, called argaman, represents the sun, which God created “to weave (la’arog) the manna of fruits and grasses” (and, we should add, plankton!) that nourish all life on Earth.

Other midrashic texts like Tanchuma go deeper than puns. Tanchuma says that the Mishkan corresponds not only to the whole world, but also “to the structure of the human, who is a small world (olam katan)”. Tanchuma goes on to explain, “When the Holy One created the world, the way a woman gestates a child is how God created it.” What a beautiful, feminine image of God!

Tanchuma implicitly taught a third lesson: Just as the Mishkan is holy, so too is Creation. The first published seder for Tu Bishvat (the New Year of the trees), P’ri Eitz Hadar, written in the 17th century, quotes our verse, Exodus 36:18, to make the same point. The opening paragraph of the culminating prayer reads, “You created the model of the upper worlds on the earth below, making all of them with wisdom, upper above and lower below, to join the tent together to become one / l’chaber et ha’ohel lih’yot echad / לחבר את האוהל להיות אחד”. In other words, the first Mishkan was not the Mishkan in the desert, but the Mishkan of Creation itself. The world is a Temple, a holy sanctuary, and a single living being. 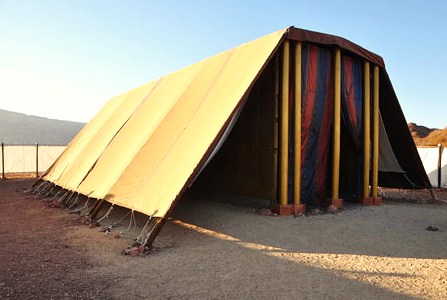 The Kabbalists took this idea even further than the midrash: “As above, so below” – the lower physical realm, which is the Creation we can see, corresponds to the upper spiritual realm of the Sefirot, which are God’s image. For all Kabbalists, that meant that whatever blessing was drawn down into Creation by the Mishkan also impacted the highest levels of reality. For some Kabbalists, that also meant something that may seem surprising: they believed that just as the human is an image of God, so too the whole Creation is the image of God (you can read about this in Kabbalah and Ecology).

Here’s the take home (the “cash Torah”): The image of God, first breathed into humanity and then built into the desert Mishkan created by human beings, is also the image of Creation, the Mishkan gestated by God.

A final note: as we pause on the journey between Tu Bishvat and the spring festival of Passover to read about the Mishkan and brass clasps and reflect on the unity of Creation, we are already blessed in the Northern hemisphere to witness the awakening of the trees and plants. This transformation evokes what Jacob called “the song of the land” (Genesis 43:11), or to quote Song of Songs, “from the corners of the land hanitzanim nir’u, eit hazamir higi’a / the sparkling flowers appear, and the time of singing arrives” (Song of Songs 2:12).

According to Zohar Chadash, the whole Creation is made of songs of desire (B’reishit 5d). May we listen to these songs, may we sing the song of the whole world, and may we be witnesses that the holiness we create is an image of the holiness from which we are created. May we witness what the mystics know: that the image of God can be found in the image of Creation.

Rabbi David Seidenberg is the creator of neohasid.org, and the author of Kabbalah and Ecology: God’s Image in the More-Than-Human World, published by Cambridge University Press. Learn more about the P’ri Eitz Hadar and download the prayer in Hebrew and English here.