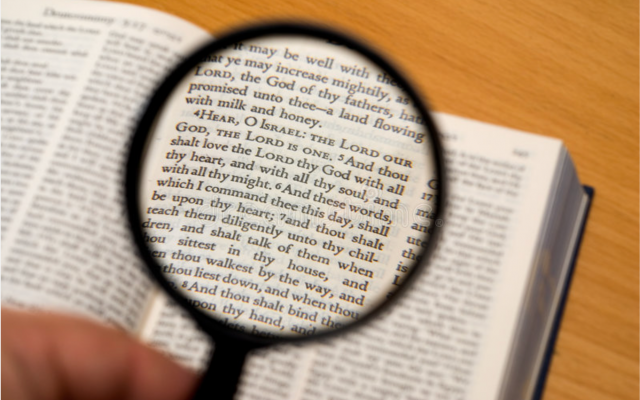 "We reflect, for the first time as a group, on the spiritual dimension of listening, of Shema Yisrael." (Image: 'Concentrating on the Bible' by Howard Sandler)

“If only you would listen to these laws…” (Deut. 7:12). These words with which our parsha begins contain a verb that is a fundamental motif of the book of Devarim. The verb is sh-m-a. It occurred in last week’s parsha in the most famous line of the whole of Judaism, Shema Yisrael. It occurs later in this week’s parsha in the second paragraph of the Shema, “It shall be if you surely listen [shamoa tishme’u]” (Deut. 11:13). In fact, this verb appears no less than 92 times in Devarim as a whole.

We often miss the significance of this word because of what I call the fallacy of translatability: the assumption that one language is fully translatable into another. We hear a word translated from one language to another and assume that it means the same in both. But often it doesn’t. Languages are only partially translatable into one another.[1] The key terms of one civilization are often not fully reproducible in another. The Greek word megalopsychos, for example, Aristotle’s “great-souled man” who is great and knows he is, and carries himself with aristocratic pride, is untranslatable into a moral system like Judaism in which humility is a virtue. The English word “tact” has no precise equivalent in Hebrew. And so on.

This is particularly so in the case of the Hebrew verb sh-m-a. Listen, for example, to the various ways the opening words of this week’s parsha have been translated into English:

If you hearken to these precepts…

If you completely obey these laws…

If you pay attention to these laws…

If you heed these ordinances…

Because ye hear these judgments…

There is no single English word that means to hear, to listen, to heed, to pay attention to, and to obey. Sh-m-a also means “to understand,” as in the story of the tower of Babel, when God says, “Come, let us go down and confuse their language so they will not understand [yishme’u] each other” (Gen. 11:7).

As I have argued elsewhere, one of the most striking facts about the Torah is that, although it contains 613 commands, it does not contain a word that means “to obey.” When such a word was needed in modern Hebrew, the verb le-tzayet was borrowed from Aramaic. The verb used by the Torah in place of “to obey” is sh-m-a. This is of the highest possible significance. It means that blind obedience is not a virtue in Judaism. God wants us to understand the laws He has commanded us. He wants us to reflect on why this law, not that. He wants us to listen, to reflect, to seek to understand, to internalise and to respond. He wants us to become a listening people.

Ancient Greece was a visual culture, a culture of art, architecture, theatre and spectacle. For the Greeks generally, and Plato specifically, knowing was a form of seeing. Judaism, as Freud pointed out in Moses and Monotheism,[2] is a non-visual culture. We worship a God who cannot be seen; and making sacred images, icons, is absolutely forbidden. In Judaism we do not see God; we hear God. Knowing is a form of listening. Ironically, Freud himself, deeply ambivalent though he was about Judaism, invented the listening cure in psychoanalysis: listening as therapy.[3]

It follows that in Judaism listening is a deeply spiritual act. To listen to God is to be open to God. That is what Moses is saying throughout Devarim: “If only you would listen.” So it is with leadership – indeed with all forms of interpersonal relationship. Often the greatest gift we can give someone is to listen to them.

Viktor Frankl, who survived Auschwitz and went on to create a new form of psychotherapy based on “man’s search for meaning,” once told the story of a patient of his who phoned him in the middle of the night to tell him, calmly, that she was about to commit suicide. He kept her on the phone for two hours, giving her every conceivable reason to live. Eventually she said that she had changed her mind and would not end her life. When he next saw the woman he asked her which of his many reasons had persuaded her to change her mind. “None,” she replied. “Why then did you decide not to commit suicide?” She replied that the fact that someone was prepared to listen to her for two hours in the middle of the night convinced her that life was worth living after all.[4]

As Chief Rabbi I was involved in resolving a number of highly intractable agunah cases, situations in which a husband was unwilling to give his wife a get so that she could remarry. We resolved all these cases not by legal devices but by the simple act of listening: deep listening, in which we were able to convince both sides that we had heard their pain and their sense of injustice. This took many hours of total concentration and a principled absence of judgment and direction. Eventually our listening absorbed the acrimony and the two sides were able to resolve their differences together. Listening is intensely therapeutic.

Before I became Chief Rabbi, I was head of our rabbinical training seminary, Jews’ College. There in the 1980s we ran one of the most advanced practical rabbinics programmes ever devised. It included a three-year programme in counselling. The professionals we recruited to run the course told us that they had one precondition. We had to agree to take all the participants away to an enclosed location for two days. Only those who were willing to do this would be admitted to the course. We did not know in advance what the counsellors were planning to do, but we soon discovered. They planned to teach us the method pioneered by Carl Rogers known as ‘non-directive’ or ‘person-centred’ therapy. This involves active listening and reflective questioning, but no guidance on the part of the therapist.

As the nature of the method became clear, the Rabbis began to object. It seemed to oppose everything they stood for. To be a Rabbi is to teach, to direct, to tell people what to do. The tension between the counsellors and the Rabbis grew almost to the point of crisis, so much so that we had to stop the course for an hour while we sought some way of reconciling what the counsellors were doing with what the Torah seemed to be saying. That is when we began to reflect, for the first time as a group, on the spiritual dimension of listening, of Shema Yisrael.

The deep truth behind person-centred therapy is that listening is the key virtue of the religious life. That is what Moses was saying throughout Devarim. If we want God to listen to us, we have to be prepared to listen to Him. And if we learn to listen to Him, then we eventually learn to listen to our fellow humans: the silent cry of the lonely, the poor, the weak, the vulnerable, the people in existential pain.

When God appeared to King Solomon in a dream and asked him what he would like to be given, Solomon replied: lev shome’a, literally “a listening heart” to judge the people (1 Kings 3:9). The choice of words is significant. Solomon’s wisdom lay, at least in part, in his ability to listen, to hear the emotion behind the words, to sense what was being left unsaid as well as what was said. It is common to find leaders who speak, very rare to find leaders who listen. But listening often makes the difference.

Listening matters in a moral environment as insistent on human dignity as Judaism. The very act of listening is a form of respect. To illustrate this, I would like to share a story with you. The royal family in Britain is known always to arrive on time and depart on time. I will never forget the occasion ­– her aides told me that they had never witnessed it before – when the Queen stayed for two hours longer than her scheduled departure time. The day was 27 January 2005, the occasion, the sixtieth anniversary of the liberation of Auschwitz. The Queen had invited survivors to a reception at St James’ Palace. Each had a story to tell, and the Queen took the time to listen to every one of them. One after another came up to me and said, “Sixty years ago I did not know whether tomorrow I would be alive, and here I am talking to the Queen.” That act of listening was one of the most royal acts of graciousness I have ever witnessed. Listening is a profound affirmation of the humanity of the other.

In the encounter at the Burning Bush, when God summoned Moses to be a leader, Moses replied, “I am not a man of words, not yesterday, not the day before, not from the first time You spoke to Your servant. I am slow of speech and tongue” (Ex. 4:10). Why would God choose a man who found it difficult to speak to lead the Jewish people? Perhaps because one who cannot speak learns how to listen.

A leader is one who knows how to listen: to the unspoken cry of others and to the still, small voice of God.

[1] Robert Frost said: “Poetry is what gets lost in translation.” Cervantes compared translation to the other side of a tapestry. At best we see a rough outline of the pattern we know exists on the other side, but it lacks definition and is full of loose threads.

[3] Anna O. (Bertha Pappenheim) famously described Freudian psychoanalysis as “the talking cure,” but it is in fact a listening cure. Only through the active listening of the analyst can there be the therapeutic or cathartic talking of the patient.