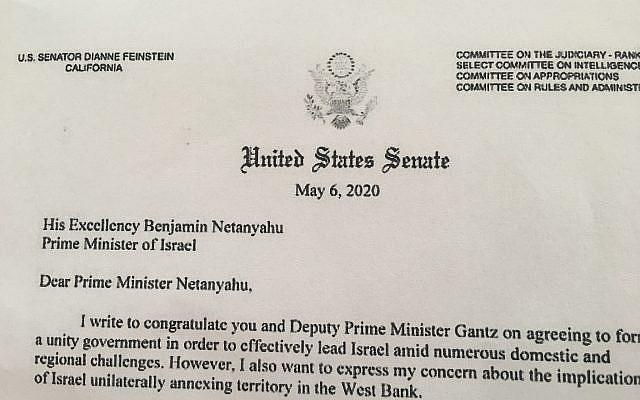 I am writing in response to your recent letter to Prime Minister Netanyahu. I’m one of your constituents who voted for you in numerous elections, a Cal State professor emerita now living in Tel Aviv. My book, Framing Israel is based on analyzing public discourse about Israel.

I know you are well aware of Israel’s history and its many negotiated and unilateral peace offers. Yet you write that you are “hopeful” for the Palestinian Authority and Israel to “come to the negotiating table to reach an agreement so that our shared goal of two states, living side-by-side in peace and prosperity, can be realized.” Certainly, you know that no Palestinian leader has advocated for “living side-by-side in peace” with Israel.

On the contrary, the Palestinian Authority continues to celebrate and fund terror attacks on Israeli civilians and the Hamas government continues to target Israelis with incendiary devices and rockets. Even when Israel unilaterally left Gaza in 2005 hoping for “peace and prosperity” for Palestinians and Israelis, Hamas took over in a coup creating a dictatorship that spends billions on terror. Palestinian leaders have not asked for peace with Israel but for its disappearance.

Now there is another, new proposed peace plan offered by the US. The Palestinian Authority has rejected it sight unseen. That Israel is preparing to put into practice a small part of that plan does not preclude future negotiations or agreements.

Your letter doesn’t indicate why you think that extending Israeli law to the Israeli citizens who live in Area C, the area designated by the Oslo Accords as fully under Israeli control, will negatively impact future peace talks. Nor does your letter note that the Palestinian cities (Areas A and B) will remain under Palestinian control. Calling this an “annexation” may be popular but it is also misleading, for the area in question does not belong to any country other than Israel.

You write of your “fear” for what will happen to “Israel’s national security and diplomatic relationships.” On first reading, I thought this sounded a bit threatening. But your letter begins by congratulating the Prime Minister and Defense Minister on Israel’s new unity government, the government that plans to follow through with extending sovereignty to the area in question. So, I think it’s reasonable to conclude that if Israel’s elected parliament and the majority of Israelis do not share your fears, perhaps you need not worry either.