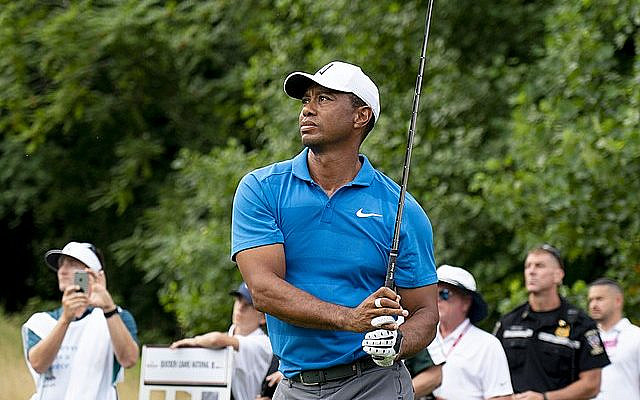 I read the New York Post yesterday morning; the sports page, and regretted it. I hated what I read. A column by one Phil Mushnick, another (so far, I can count two) attack on the severely injured—nearly killed, golf titan, Tiger Woods. If there’s anything Mushnick is Woods’ counterpart in, it is being the GOAT (greatest of all time); but whereas Tiger is the greatest golfer of all time, Mushnick is the greatest baby-boomer jackass of all time! And if he is slightly too young to be a boomer (his personal information, unlike those on the receiving end of his babyish, jealousy-based mudslinging, is kept private)—he writes and opines with the same old-school and outmoded angle on culture and society that has led to the definition of the GOP as an unapologetic, white-dominated, classist, xenophobic caucus.

Saturday morning’s column (April 10, 2021), was entitled, “ESPN, CBS turn blind eye at Master to Tiger Woods’ haunted past”.  On February 25, in the immediate aftermath of Tiger’s nearly tragic crash (just two days later) in southern California, Mushnick came out in the first round swinging—shadow-boxing, like a coward, kicking Tiger Woods even as he lay in a hospital bed, with two broken legs, not knowing whether he’d ever play golf, let alone walk again. That column was entitled, “Coverage of Tiger Woods’ ‘accident’ ignores reality in favor of reverence”.

What Mushnick’s columns do is slander the great athlete’s character, take an inventory of his faults, like a Jewish mother would their child—annoying nagging. They highlight Tiger’s driving records, underscoring his handful of accidents; Tiger’s struggle with addiction to painkillers, (he has battled excruciating back problems); and has even had the chutzpa to comment on Tiger Woods’ marital status, when Mushnick, himself, according to celebpie.com, is single, well-past middle-age.

The idol Mushnick wishes to destroy is a worthy icon. Tiger Woods’ father, Earl, was a Black Vietnam veteran and U.S. army officer, with Native American blood. The two of them launched the TGR Foundation in 1996, to expose under-privileged inner-city youth to the great sport of golf. In doing this, and simply in being a humble champion, he has saved the sport from a cultural death-row, where golf culture is confined to uber-prim and stuffy, Anglo-Saxon Protestant country clubs in the uber-prim and stuffy Anglo-Saxon Protestant suburbs. He made it so that not only white people could not only play, but dominate in the sport of golf, the way Arthur Ash won at tennis.

It is evident why Phil Mushnick of the New York Post repeatedly attempts to assassinate the great athlete’s character and lifestyle. Tiger isn’t shaped by the Judeo-Christian corset that conforms the vast majority of the upper-middle class and up, (those who actually play the game of golf). Tiger was raised—and I think—currently practices Buddhism. He shatters the convenient (for some) stigma that you have to be Republican (Tiger is registered as an Independent), Caucasian, Christian and—above all—male to play golf; even to belong to the country-club, in the first place.

I’ll never forget where I was in life when, on April 13, Tiger won the 1997 Masters. I was in eighth grade. I remember that late Sunday afternoon, when the whole world was gobsmacked by this 21-year-old kid who made the most challenging sport look easy. My father was laughing and weeping with joy. On Monday, in school, everybody was talking about it, as I’m sure was the case around the water-cooler at work. For the first time, a Black and Asian man was putting on the champion’s Green Coat. A legend was born in Augusta, Georgia.

Likewise, I’ll never forget the way it felt when the headline popped up on my screen, last February, that one of my sports heroes might be dead. He might never walk, compete, play golf, run with his children’s children. The first thing we ask is, ‘why do great heroes have to fall?’ When he came back from a debilitating back injury, aged into his forties, and won the 2019 Masters, just ahead of PGA Tour newcomers Brooks Koepka and Dustin Johnson, I knew that he was the greatest ever. He had a gift from beyond. I pray that Tiger is smiling wherever he is, despite the accident, and if he reads the New York Post, laughing-off Phil Mushnick’s immature mudslinging, and humbly, calmly, in his signature manner, knowing that he’s the best there ever was, and an upstanding gentleman to boot.

About the Author
Scott Shlomo Krane has been blogging for TOI since February 2012. His writing has also appeared in The Atlantic, Tablet, Ha'aretz, The Jerusalem Post, the Daily Caller, JazzTimes and he will be the host of a forthcoming blog on AllAboutJazz.com. Scott was a columnist and breaking news editor for Arutz Sheva-Israel National News (2011-2013). In addition to holding a degree in Judaic Studies and a Master's in English from Bar-Ilan University (for which he wrote his thesis on the poetry of American master, John Ashbery), he has learned Judaism at Hadar Ha'Torah Rabbinical Seminary in Brooklyn.
Related Topics
Related Posts
Comments