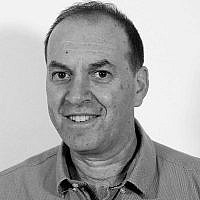 The Blogs
Yaniv Sagee
Apply for a Blog
Please note that the posts on The Blogs are contributed by third parties. The opinions, facts and any media content in them are presented solely by the authors, and neither The Times of Israel nor its partners assume any responsibility for them. Please contact us in case of abuse. In case of abuse,
Report this post.

Nothing prepared me for the moment when the populist political games of the Prime Minister and the coalition parties inflicted the racist Nationality Law on us, completely changing the picture. Write this down: on July 18, 2018, the State of Israel changed the definition of its entire essence. From May 1948 until this week, we defined ourselves as a Jewish-democratic state. That is, as the national state of the Jewish people that is also the democratic and equal state of all its citizens, without regard to sex, religion, race, or nationality. Israel’s Declaration of Independence was not only its founding vision; it was the consensus defining the boundaries of public discourse and laws of the country. All this now belongs to the past.

The Israeli Knesset that passed the Nationality Law as a “Basic Law” has decided that from now on, anyone who is not Jewish is a second-class citizen in the State of Israel. This law is meant to convey a clear message: the State of Israel belongs to the Jewish people, those who live here, and those who do not live here. For the twenty percent of the citizens of the country who are native-born Arabs, the message is – this is not your land, and we, the Jewish majority, have no intention of ensuring your personal rights, and certainly not your collective national rights.

The Declaration of Independence and all legislation since then until now, has attempted to preserve the balance between the natural right of the Jewish people to a national home and our commitment to democracy and equality. But this law, intended to be a prelude to future legislation, does not deal with democracy at all, nor with human rights or equality. This is the new Israel envisioned by the parties of the coalition: a Jewish state that is not democratic, humiliating the large minority living in it.

I have heard responses that minimize the significance of the law, something like, “This is only words and slogans but there will be no actual impact.” And I would like to say: The impacts already exist, here and now, and in immediate ways. I invite you to talk to any non-Jew living in Israel, so you can hear the burning sense of insult, the frustration, the despair, the readiness to leave the democratic game, this from people who have devoted their lives to connecting their Arab-Palestinian identity to their country, Israel, who now feel as if they are left without a state.

And what was so urgent for us about downgrading the Arabic language? Why, even though Arabs constitute twenty percent of the Israeli population and they are a native-born minority, does this law not recognize even their most basic right to a language? Do we understand that this is harmful not only to the rights of the Arab citizens to respect, to a language, and to a culture, but that it also damages any possibility of carrying out their lives and realizing their rights? It seems to me that the desire to cancel the official status of the Arabic language is primarily intended to “show them” who is the master of the house, but the results and the implications are to push the Arab citizens of Israel into the warm and outstretched arms of the Northern Branch of the Islamic Movement and the forces calling for segregation and alienation from Israeli society. Whoever thinks that this will grant us, Israeli Jews, more security and recognition of our lives here, is daydreaming.

Then there is the law’s specification that Jewish settlement in Israel is a national value that the state must promote. This is really new? For this we needed a law – after over the course of 70 years we established 700 Jewish settlements in Israel and zero Arab settlements? What exactly was so urgent that we needed to anchor a clause in the law that prioritizes the Jewish population over the Arab population in the realm of settlement and housing, thus discriminating by nationality? That is our decision – that after 70 years, instead of creating affirmative action and equality, the time has arrived to anchor inequality and discrimination against Arab citizens in law.

For the first time in my life, I feel a genuine threat to my life in Israel. This is not an external threat from Iran and certainly not from Hamas. It is an internal threat from nationalists and racists, to create a regime that I am not willing to be a part of. We are on a slippery slope, at the bottom of which a fascist state is waiting for us, and I have no intention of becoming a racist who benefits from laws guaranteeing my status as a member of a superior race. The time has come to act before it is too late. This is not the time for apathy and not the time for despair. It is the time to join forces and to embark on a struggle to save Israel from itself. This is a political struggle. Yes, political even if you disdain politics and politicians. Anyone not getting their hands dirty in this struggle participates in our loss.

So, what do we do? First of all, we go out to protest, loudly. It is not the Arabs who need to lead the protest but rather Arabs and Jews together. We are all victims of this racism. We need to raise our voices in a piercing outcry that will wash over our shared land, that will also connect Jews of the Diaspora, Jews who are embarrassed by the Israel of this Nationality Law. An outcry that will connect the youth of the future with the veterans of Israel who were here before Independence and the Nakba, those who understand very well that this country is shared by all of its residents from both peoples, and that we will never live here in security if we base our existence on wrongdoing, separation, and inequality. And after the protest we must change the legislation. Either through annulment by the Supreme Court, or with 61 hands raised in the Knesset against this disgrace.

About the Author
Yaniv Sagee is the CEO of the Center for a Shared Society at Givat Haviva.
Related Topics
Related Posts
Comments