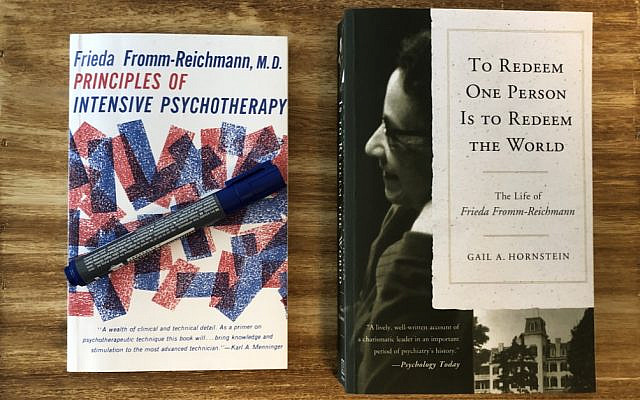 One book by Frieda Fromm-Reichmann (1889-1957), one book on her life and work. Photo: Independent Lodge of Theosophists

Erich Fromm is relatively popular among theosophists.[1] However, the number is not large of students of esoteric philosophy who know that Fromm’s wife, Frieda Fromm-Reichmann, was an extraordinary psychiatrist who successfully treated schizophrenia and other psychotic disorders by psychoanalytic means and using no pharmaceutical drugs.

Theosophists who have read the writings of H. P. Blavatsky on Psychology and are acquainted with the works of Fritz Kunkel – or Georg Groddeck – tend not to believe too blindly in the present classification of the forms of psychological suffering which involve more of the subconscious than of the conscious. Such forms of pain are usually called psychotic, and include hysteria. [2]

Taking into consideration the present condition of mankind, the topic of psychotic diseases should deserve some attention of theosophists, for several reasons. These are some of them:

There are large numbers of persons suffering from psychotic diseases nowadays in the West. The fact is well-documented and easy to observe in daily life. The problem has been getting worse as time passes, for the growing use of psychotropic drugs like cocaine and marijuana induces their consumers to fall into psychosis; and both drugs are rather “popular” nowadays in the West. Several well-researched books demonstrate that the use of psychotropic drugs leads to psychosis. [3]

The addiction to drugs and alcoholic beverages is widespread in political, financial and economic elites in Western civilization. Scandals revealing such behaviour on the part of public personalities are numerous and involve heads of state, prime-ministers, their main counsellors and other influential personalities – not to mention famous artists.

On the other hand, the dogmatic aspects of Western religion are seen by Freud as being not far from collective forms of psychosis. See the article “A Psychoanalysis of Religions”.

The intimate relation between Nazism, Fascism and psychosis is well known. On the other hand, persons of goodwill might have an interest in knowing what a psychoanalyst would have to say about the North-American use of two atomic bombs in Japan, in 1945. The US employed such bombs against defenceless civil populations, at the same time that it presented itself as the World Champion of Love for Life and the greatest defender on Earth of human rights. Was the bombing of Hiroshima and Nagasaki a psychotic action? Was it sane and moderate? Or was it a sick and unbalanced act, especially if one considers that Japan was already militarily defeated? These questions deserve attention.

One should seek for a psychoanalytic and psychiatric diagnosis of the wars promoted by the Western countries after the 1940s. I’m thinking of Korea, Vietnam, Iraq, Afghanistan, and the process of nuclear proliferation – not to mention the explosive growth of the sales of “conventional” weapons, even in times of peace.

The collective irruption of utter irrationality – a blind love of destruction in large scale – seems to be cyclic in human History. It is clearly recurrent, and Sigmund Freud studied it.

The phenomenon of “unlimited hatred” in social life was examined by Helena Blavatsky in her revealing article “Turkish Barbarities”. Such an epidemic disease must be examined in its roots at the individual life, for individual citizens give the basic substance of nations.

A Book on Frieda’s Life and Work

Frieda Fromm-Reichmann (1889-1957), a German Jewish thinker who was subject to Nazi persecution and exile, personally knew what human pain and desperation is about. Frieda is among the few who attempted to cure psychosis from the point of view of Psychoanalysis. She achieved considerable success, as shown in her well-documented biography “To Redeem One Person is to Redeem the World”, by Gail A. Hornstein.[4]

The presentation of the work in bookshops announces that Frieda “successfully treated schizophrenics and other seriously disturbed mental patients with intensive psychotherapy, rather than medication, lobotomy, or shock treatment.”

The book was “written with unprecedented access to a rich archive of clinical materials and newly discovered records and documents from across Europe and the United States”.

Frieda’s own writings indicate that the way to correctly relate to a person showing “psychotic” behaviour includes going beyond the realm of worded dialogue.  Empathy is of the essence, even in the presence of violence.[5] Theosophy adds: a knowledge of the Zen tradition will help getting beyond the limits of words and transcend the conceptual mind, the actionless perspective of mere speech.

In theosophical and esoteric circles, fiery struggles for power often include mental, occult forms of violence under the elegant appearance of philosophical or institutional disagreement. The intense psychological search for personal power and glory in spiritual organizations may correspond to the problem of obsessional patients. They often “withdraw into a private world of secret grandeur”.[6] They become convinced that they are high Initiates; that they are the reincarnation of some great leader and Savior of mankind; that they can talk to spiritual Masters; or that they are clairvoyant. Imaginary clairvoyance is part of the psychotic world.

From Extreme Fragility to ‘Secret Omnipotence’

Sometimes the problem emerges when a person suffers from childhood with a profound feeling of being someone utterly destitute of value, useless, defenceless, or of being “deeply bad inside”. Such individuals often build a secondary layer of intended goodness and omnipotence, so as to compensate for their inner suffering and frailty.  An imagined omnipotence is easy to find in Carlos Castaneda’s books, side by side with the use of psychotropic drugs. The problem of ‘omnipotence’ is not rare in esoteric circles. Subconscious suffering tends to provoke imaginary compensations. Every student of religion and mystical philosophies should pay attention to such possibilities, for a rational understanding of the process of pain in human soul avoids psychotic disorders.

The fact is that the limits are not clear between psychosis and neurosis. Psychiatry usually detects – and precariously deals with – “psychotic crises”. However, the roots of the process are much wider, being invisible in daily life unless one develops a specific attention with regard to it.

On a social level, a sickly sense of omnipotence may be experienced in the act of researching, developing and being able to use atomic or biological weapons. The phenomenon includes other forms of “absolute power”, such as the use of mass-hypnotism through large-scale propaganda intended to produce the subconscious manipulation of entire communities and nations.

The political worship of “infallible” leaders or organizations are expressions of the same problem. False saints and “omnipotent” religious leaders are not hard to find in every nation. These forms of disease are difficult to heal because they occur in entire communities, and because psychosis is often well-disguised and firmly “denied” by the ones who suffer from it. The citizen who seeks for truth must have the courage to think by himself and get away from spectacular illusions. It is thanks to the use of calm discernment and common sense that he makes progress along the path to self-knowledge.

Frieda Fromm-Reichmann was a great ethical thinker, and a selfless friend of humanity. The healing effect of her writings, and of her biography by Gail A. Hornstein, goes beyond the world of psychotic disorders. They help us understand the dangers of every “intense automatic feeling of fear-and-hatred”, whether individual or collective.

Frieda’s biography makes it easier to see the practical effects of the widespread use of drugs which provoke psychosis, among Western social elites, and its relation to collective karma in the context of the Doctrine of the Cycles in human history. It must be said also that “To Redeem One Person is to Redeem the World” is a well-written book, and extremely nice to read.

[1] See the list of Fromm’s texts and books in one of our associated websites.

[2] Read for instance the article “The Politics of Hysteria”. As to the writings of H.P. Blavatsky, examine “A Case of Obsession”.

* The Politics of Hysteria.
* Freud on Freedom from Delusion.
* Awakening from the Opium Wars.
* A Psychoanalysis of Religions.
* Old Prophecies and Atomic War.
* The World War in Our Minds.

About the Author
Born in Brazil in 1952, Carlos Cardoso Aveline is a journalist by profession and author of the book “The Fire and Light of Theosophical Literature”. He has other works published on esoteric philosophy and ecology. The editor of “The Aquarian Theosophist”, Cardoso Aveline thinks Judaism, Jewish philosophy and Israel have important roles to play in the ethical rebirth the world needs in the present century. He lives in Portugal and directs the Library and Research Center of the Independent Lodge of Theosophists, whose associated websites include www.TheosophyOnline.com and www.HelenaBlavatsky.Org .