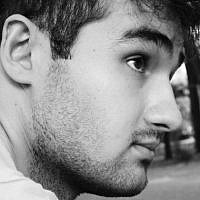 The Blogs
Milad Doroudian
BA. MA.
Apply for a Blog
Please note that the posts on The Blogs are contributed by third parties. The opinions, facts and any media content in them are presented solely by the authors, and neither The Times of Israel nor its partners assume any responsibility for them. Please contact us in case of abuse. In case of abuse,
Report this post.

To study the Shoah on an academic level, more exactly for a Master’s Degree, might have been the most difficult intellectual thing I have ever done. Of course people would ask why did you pick such a topic? And my answer was every time: when you study humanity, or the lack of it, you must look even at the worst events in human history to at least try to understand: how is this even possible?

The mental toll of reading hundreds of books, and reading the testimonies of hundreds of survivors, and even interviewing a few, was harrowing. It is adamant in academia that when you do your research, you remove yourself from it to try to achieve the best results. How exactly can you remove yourself from the testimonies of suffering of people, even from your own community?

The truth is I was not able to do it. It consumed me and my energy – even at times my pessimism took over throughout that year of writing that thesis. The pessimism and cynicism I had for humanity grew every day through my research.

Yet. Amidst all that horrible suffering, all that pain, all that meaningless toil, I found  small snippets of hope – even in that sea of hell that so many people lived through. I found stories of people helping each other, sacrificing for each other. From the most  simple shabbat dinners in the camps with some bread and water, to secret marriages between those that loved each other. Even in all of that I learned that people were good to each other, I learned that many non-Jews tried to save as many people as they could.

The stories of humanity even in those camps, and  pogroms were enough to make me continue. People’s kindness for each other, in that what can only be described hell, made me think that the Jewish people had already won against the Nazis even then, against that absolute evil. They won because unlike their oppressors, they held on to snippets of their humanity.

My research focused on Romania and Hungary, but also with a general outlook at the whole European situation. I admit there were many times in the archives, or when reading testimonies from Yad Vashem, I had tears in my eyes. I also became worried that I could not write this thesis – I could not finish such a text.

Regardless, I honestly think that every academic that engages with such a topic is really looking for an answer to the question: “How could this have happened?” or “Why was it allowed to happen?” I really doubt it anyone has ever found an answer, I for sure cannot still answer these questions. As I continue my research, as I write more papers, and maybe one day I will continue my work with a PhD, I do not think I will ever find an answer to these questions.

Beyond this, there is still a lot of research work that needs to be done in regards to the Shoah – it is paramount that it becomes more of a focus in all levels of education. It seems that younger generations have become more apathetic to it especially in the last two decades.

One thing I can tell you as a historian, is that humans are capable of the most despicable things, but they are also capable of immense kindness.

About the Author
I am a historian that concentrates on many different aspects of material history, but also Jewish history as a whole.
Related Topics
Related Posts
Comments