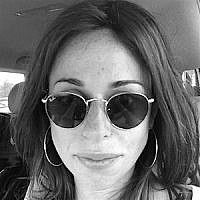 The Blogs
Esther Farkovits
Apply for a Blog
Advertisement
Please note that the posts on The Blogs are contributed by third parties. The opinions, facts and any media content in them are presented solely by the authors, and neither The Times of Israel nor its partners assume any responsibility for them. Please contact us in case of abuse. In case of abuse,
Report this post.

I remember the first time we drove five minutes past Kfar Saba and my husband told me we had crossed the green line. I obviously knew there wasn’t an actual wall or brick road painted in green but I did expect some drama. Instead, as the traffic lights and malls faded into the background, I began to see more mountains and the occasional group of cows out to pasture. If anything, this reported war zone or “occupation” was an expanse of rolling hills and dramatic views ten times more beautiful than the city I live in.

There are Arab villages within our said “line” and outside of it.

I read of terror and stabbings within the line as well as outside our elusive line.

Perhaps the whole concept was born with the hopes of one day returning the land outside this line. Hey, we did it in 1982 with the Sinai desert we won after Egypt attacked us. We did it again when we expelled our own people from Gaza. Perhaps we are holding this land in some sort of purgatory so we can show the world how we are the only ones contemplating making our borders smaller despite winning wars we had no desire to fight. We are willing to undergo national suicide to show a hostile world how illogically good we are. Perhaps I’m wrong and this line is healthy somehow I mean it is green and all….

I won’t delve into the lessons unlearned and the nature of our enemy. Instead I just want to ask you this, who recognizes our invisible line?

I see it as Israel.

My friends, with their modest homes overlooking the lands our forefathers journeyed, see it as Israel.

The villagers who just want to live quietly see it as Israel.

Our enemies, with their sharpened knives and hearts filled with hate, see it as Israel.

I can go on and discuss what the cows see and what the children see and to be so bold as to imagine what G-d sees….My conclusions are: it is Israel.

So I have one more request before I end this essay; To those who embrace this divisive line please go take a drive. I am assuming you must not be afraid to travel there since the people that you fear are the very ones you trust to take over those mountains and homes. So, we have established that you aren’t scared. There are those too disgusted by their own people and the crimes they read about to make the trip. Well, before you hate your heritage, brethren and country, I invite you to see for yourself. Just you and your open mind. A mind is not easy to open. All self hatred and guilt you have been fed has to be left at our imaginary green line. I wish you a journey that will bring you closer to truth. A journey that involves accepting the kindness inherent in your people, accepting that there are agendas disguised as political correctness, and accepting the beauty inherent in your land (yes, I did say your’ land, my apologies.)

About the Author
Esther Farkovits moved to Israel 5 years ago with her husband and sons from Monsey, NY. She grew up in Brooklyn NY and ha since made Aliyah with her family b’H. She currently teaches Judaic studies in a Seminary for teenage girls and her journey doesn't end here.
Comments